Oaxaca City is best known for its Day of the Dead celebrations, the annual Guelaguetza Festival, and its delectable food, especially the mole sauce that comes in many varieties. It has been described as a "living cultural center" and an open-air museum. The region boasts one of the greatest varieties of indigenous people on the continent; the textiles and crafts they produce make this a souvenir paradise. While there is plenty of history here, pre-Hispanic and Colonial, the city is also filled with bright, modern hotels and B&Bs with innovative takes on traditional cuisine and amentities that show this city a growing global tourism destination. Here are reviews of some of the best hotels in Oaxaca City that offer readers a wide range of experiences, from chic to traditional, intimate to grandiose. 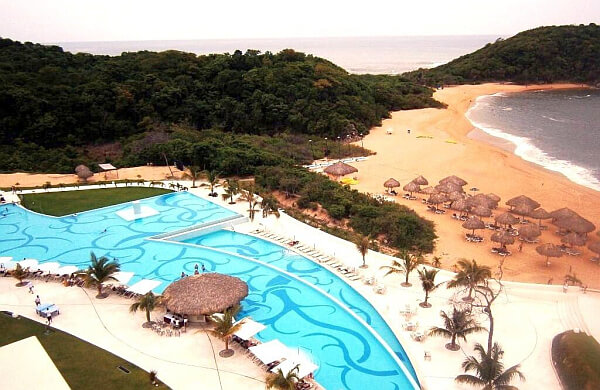 It's a long drive through the mountains to the coastal resort area of Huatulco, so most visitors fly in. As we pointed out in this article on real estate in Huatulco however, that will change when a new road and tunnel system reduces a seven–hour drive to three. While most visitors to this laid-back coastline are still domestic, a growing population of ex-pats and foreigner tourists are discovering the delights of Huatulco's hidden coves and mellow beaches. There is also a growing foodie scene to compliment the expansion of new Huatulco luxury resorts each year.

There were no luxurious resorts in surf magnet Puerto Escondido, but the landscape changed in 2014 with the arrival of Hotel Escondido, a boutique property on a long, empty beach a half hour from the city. More relaxed than some of Mexico's bigger beach destinations, Puerto Escondido is also gaining in popularity as travlers seek out an authentic Mexican beach experience.