Located a short walk from the main square and next to leafy Parque Juarez, Hotel Matilda is nevertheless a world away from most San Miguel de Allende colonial inns. It's brash, modern, and sleek, looking like it would fit right into a posh neighborhood of Mexico City, but coming off as much more friendly. 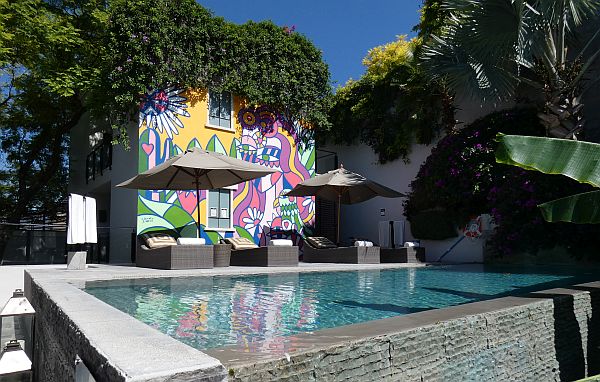 It's clear the moment you walk into Hotel Matilda that this is no Spanish Colonial B&B. From the morphing light display behind the reception desk to the modern art in the lobby, the immediate impression is one of being in the here and now, not stepping into a recreated bygone era.

When it opened in 2010, this was a bold move. Whether this cool modernism was what most guests really wanted when they visit San Miguel de Allende—a picture-perfect colonial city in central Mexico—was up for debate. The owners' instincts were correct though and it's not a reach to say that Hotel Matilda is responsible for single-handedly changing the demographics of the city's visitor base. They helped lower the average visitor age by showing a more modern side of Mexico and dramatically increased the number of creative class domestic visitors from Mexico City. This fresh alternative in a sea of similar designs helped convince many non-retirees that it was cool to come here on vacation.

The initial impression is striking, with a fountain crafted from a suspended chain and stone wheel, a large tree, and a staircase leading up to the hip Mui Ramen Bar and cocktail lounge. Sometimes an art hotel like this can come off as intimidating and pretentious, but the staffers exude Mexican hospitality and make everyone feel welcome from the start. They also display an impressive command of English if you need it and will figure out a way to meet your needs after they hand you a welcome drink at check-in.

The lobby area is a clubby space with a mix of modern furniture and artwork, including the Diego Rivera painting that inspired the hotel's name and a surrealist one from Japanese artist Yui Sakamoto who lives in San Miguel now. The colors pop and the decor doesn't take itself too seriously: the books are all turned spine-down so you have no idea what they are, plus some of the furniture has hoofs or hands at the bottom. 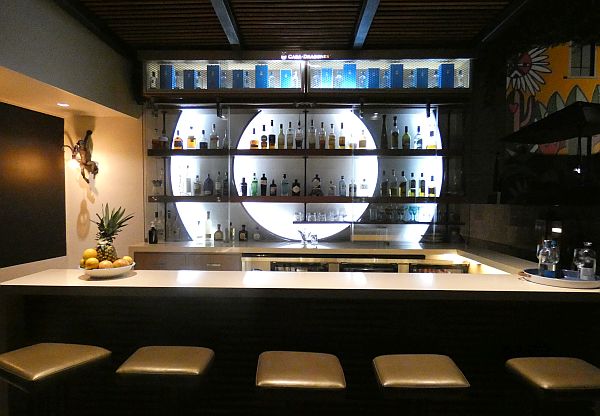 This whimsical design element continues in the lounge upstairs, where candles rest on casts of human hands and there are metal masks cast from real faces on the wall. The space takes advantage of the eternal spring climate this area is known for, with both indoor and outdoor sitting areas. Bartenders serve up a wide range of specialty cocktails and sipping tequilas, plus a bar menu features a ramen-oriented menu.

The main restaurant Moxi received more attention than the hotel for a while when it was the local outlet for celebrity chef Enrique Olvera of Pujol in Mexico City. As he increasingly got stretched too thin with new ventures in multiple cities though, the partnership ended and the restaurant is headed up by an Australian chef who was already running Bovine a few blocks away. This means that dinner won't be as showy and inventive as it used to be, but it will also be easier to figure out and less expensive. Instead of intricate dishes that require a fair bit of explanation, now you can dine on a more limited menu that the kitchen team can deliver consistently every time. We enjoyed perfectly cooked octopus, divine ravioli, a comforting roasted chicken dish, and a cheesecake with berries that I salivate just thinking about.

The restaurant is striking but not stuffy, with several indoor spaces with different furniture serving as romantic or private group options. A cart displays the dozens of bottles of tequila, mezcal, and Scotch you can sample. They also serve a variety of craft beer and some regional wines. Most of the year the weather allows outdoor dining in the courtyard area. Owners updated most of the furniture in 2020 (as well as in some of the rooms and suites) when they were closed for a few months. 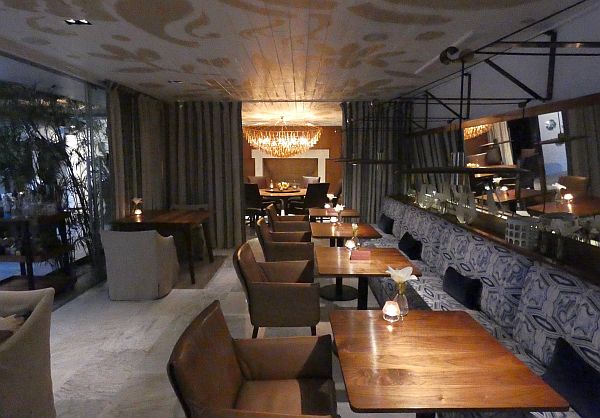 A continental breakfast is included in the rates, with good coffee, a fruit plate, and toast, but you can order lots of Mexican standards prepared attractively but without a lot of fuss. Service is refined and attentive, but friendly.

The swimming pool, shimmering with lights at night and flowing down a two-story wall, is simply stunning. The deck space is limited to a few comfy lounge chairs because of the courtyard's small footprint, but usually this will not be much of an issue though since it seldom gets all that hot in this city. The pool is heated well to use year-round.

While the 4,700 square–foot spa will not wow anyone used to sprawling beach resort ones, it is one of the best in central Mexico outside of the capital, well–designed and big enough for whiling away a few pampering hours. It has an inviting indoor/outdoor relaxation room with a fireplace, regular treatment cabins for one or two, and a deluxe cabin for two connected with a steam room and bathtub. A good variety of massages, skin care treatments, and scrubs for singles and couples are available, plus Pilates and yoga sessions are on tap for interested guests. One of the most popular treatments is the two-hour Lineal Treat. It starts with an agave inulin body scrub then leads to a body wrap with an infusion of Lineal Mezcal, rosemary and arnica. The final touch is a full massage.

The on-site gym is not huge but it covers the bases with a few aerobic machines, weight machines, and dumbbells.

This being a design hotel, everything has to operate by remote control or with switches that require some trial and error in the rooms. They've scaled back on some of the most baffling controls since opening, however, while still allowing you to switch a few things on and off from bed. The Wi-Fi also got a major upgrade along the way and you can get a good signal from almost any spot now, with dedicated routers in the suites. 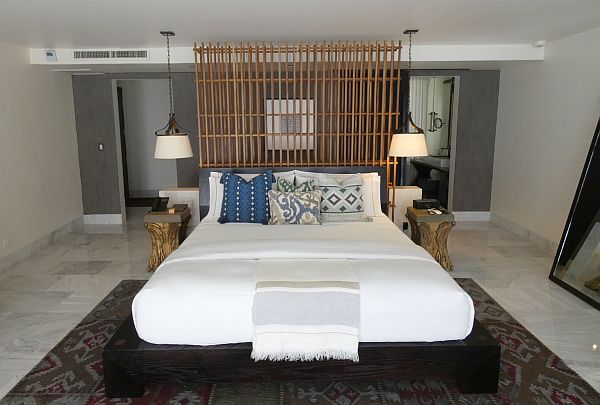 The color schemes in most rooms are subdued, with gray area rugs on white and gray marble, dark wood with sleek lines, and a few mild splashes of color on the accent pillows. You'll get all the expected gadgets and entertainment, but one of the nicest touches is bathroom lights that come on gradually when you turn them on in the middle of the night. Older guests may have some trouble closing the bathroom door though, which is a sliding wood and steel affair that looks solid and hefty—which it is. The baths themselves are sumptuous, with deep combo or separate soaking tubs, double vanities, thick towels, and ample Malin + Goetz toiletries. Some baths are a bit on the small size though and others are gigantic, so if you like sharing yours and having lots of room to move around, mention that when booking to get the right configuration.

Rooms come in several classes and layouts, with some of the rooms having terraces or balconies. Some have frosted glass windows with no view because they would look out at another room or they're on a lower level with a wall outside. Most get ample natural light in this sunny climate though. Rates roughly correspond to room size, with the various suites having 50 to 100 percent more space. The Luxury Suites have either a full living room or an extra-large main room with a sitting area and these have a separate rain shower in the bath. The Owner's Suites A and C, recently renovated, have more personality in their furnishings and have a terrace with a view. The A version has a plunge pool but C has a large enough terrace for a small party, looking over the city and park toward the Rosewood. 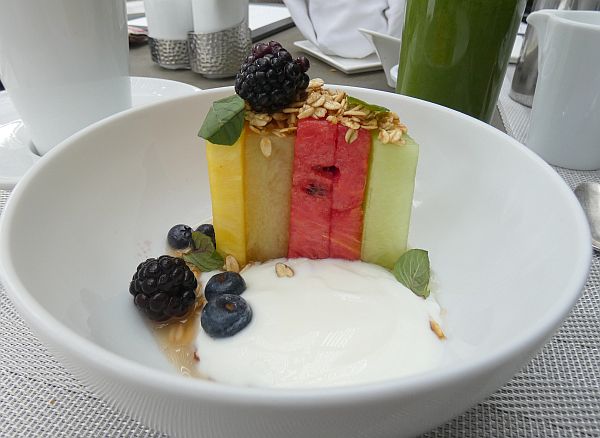 Additional amenities to make you comfortable include minibars, quality robes and slippers, turndown service, music players, and electronic safes. Rooms in the upper categories have espresso coffee makers, a soaking tub, and double vanities in the baths with additional toiletry items. Valet parking is included if you arrive by car.

This hotel frequently shows up at or near the top of glossy magazine readers' polls as one of the best city hotels in Mexico. If your tastes run to stone arches, talavera tiles, and colorful courtyards filled with flowering bougainvillea, you will probably be happier at one of the historic inns we have covered or Belmond Casa de Sierra Nevada. For those who want modern design and a full range of facilities, however, Hotel Matilda will be a breath of fresh air.