Back to Page One 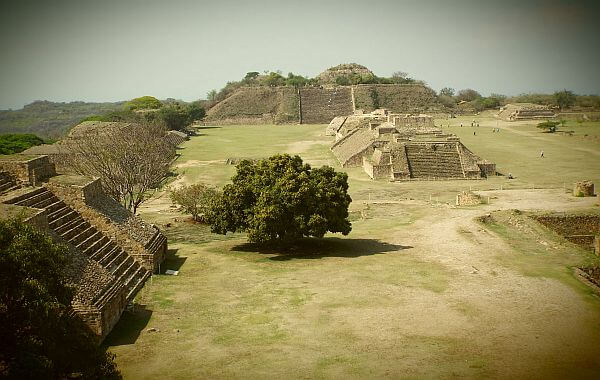 On the way to Monte Alban Nicolas explains that the region's original inhabitants weren't known for their gold or obsidian like other major indigenous civilizations, instead this area was famous for its grana cochinilla, or cochineal, a parasite that feeds on cactus and whose carmic acid, produced by the insect to deter predators, is used to make a natural red dye in cosmetics and textiles. The Zapotec of Monte Alban called themselves "The People from the Clouds" and built their city over a span of 1300 years.

The archeological site is 21 sq kilometers and most of it remains to be excavated. It's located atop a hill barely visible from the valley of Oaxaca City. As you enter into the grounds, your ears are flooded with the sound of singing cicadas and your eyes with the green of its grassy plazas and massive ceiba trees.

The site's small museum offers you a look at the residents' cone–shaped heads, their extravagant headdresses and the necklaces of teeth hung around their necks at burial. One skull displays perfectly bored holes, an example of what archeologists believe were the Zapotec people's attempts at brain surgery. 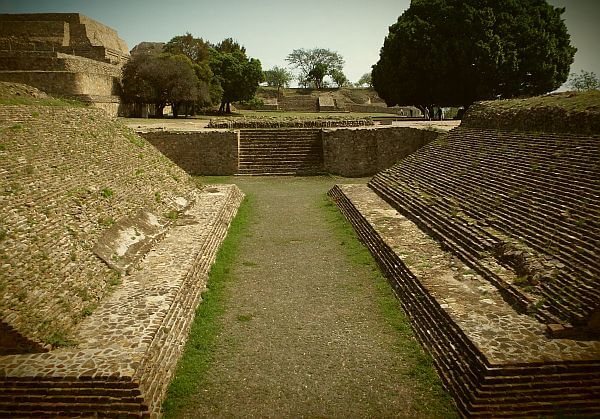 What I notice about these ruins, as opposed to many others I have visited throughout Latin America, is the relative calm. Only a scattering of groups walk among the stones, most, like us, with a single guide for two or three people, and there are only a handful of vendors insisting you buy obsidian jaguars and jade face masks.

Nicolas takes us from building to building explaining what experts believe to be their significance and giving us historical background on the civilization believed to have inhabited them.

"The people here had no jade or turquoise, so they traded with other groups," he tells us, "meaning they traveled long distances. Can you imagine traveling from here to Mexico City with only the stars to navigate by?"

Back in the car we head to Santa María Atzompa to visit Senora Irma, one of the area's highly respected sculptors. She meets us at the door in a simple blue house dress and apron, her hair wrapped turban–style in a multicolored rebozo. A tiny woman, with a deeply patterned face, she shows us around her workshop where she creates clay statues and figurines with thousands of individual parts. She sits down on the floor of her outdoor patio and turns a ball of clay into a woman holding a pig and cat, as she talks to us about her life.

Irma learned her trade from her mother and she in turn taught her six daughters. She and her husband sell to artisan shops and cooperatives all over Oaxaca. She shows us her massive outdoor kiln and reminisces about when she used to get her clay delivered by donkey.

Leaving Irma's, Nicolas takes us to an artists' cooperative where we can browse aisles of traditional Oaxacan pottery and we 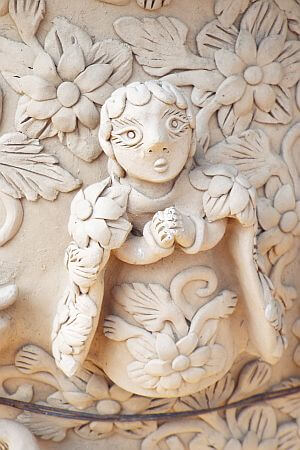 have a simple lunch on the patio of the cooperative's restaurant.

After several hours talking, Nicolas has surmised my father's obsession with Oaxacan carvings — those brightly painted wooden animals that are traditional to this area. He suggests an impromptu stop at the Pueblos Mixtas woodworking shop.

When we park on a dusty, deserted road in front of the shop, there's no clue about the great beauty that exists behind its doors. Not only are the carvings stunning, but the workshop itself is situated in a tiny Eden of flowering orchids and cactus. The brothers that run this shop take to the mountains every few months to teach rural kids, who because of responsibilities at home or in school, can't make it to the workshop to take classes. Promising young artisans often then come and carry out an internship at the workshop, preparing them to take part in one of Oaxaca's most important artistic traditions.

We head back to Oaxaca as a light afternoon rain falls, loaded down with fuchsia armadillos and electric blue hummingbirds.

In the end, everyone gets what they wanted, and we've had two great guides reveal some of the city's secrets to us.

Nicolas Garcia from US$180 to $350 a day, depending on group size, and quantity and distance of site visits. He can be reached by email at [email protected]

Other tour groups I have heard good things about: Fundacion en Via & Traditions Mexico

Story and photos by Lydia Carey.