The clear top choice in this industrial city and state capital, this Quinta Real lives up to the standards of its siblings in other locations in Mexico and has some of the nicest guest rooms in the region.

Aguascalientes does not figure on many tourist circuits of Colonial Mexico, though it does have a range of good museums — including the more–entertaining–than–it–sounds Museo de los Muertos (Death Museum). Most travelers who check into the Quinta Real here are arranging export deals from this manufacturing center. It’s a good thing, as this hotel is a couple miles from the center, next to American fast food restaurants and chain stores.

Although the Quinta Real Aguascalientes is only about two decades old, it was constructed in a style that makes it appear historic and solid. Stone walls, arches, and a grand courtyard with fountain give it a kind of hacienda feel. An inviting heated pool and lush green lawns add to the resort feel.

Check–in is seated, with a welcome drink of fresh-squeezed juice in the morning or sparkling wine in the afternoon. A bellman leads you to your suite and points out all the controls. Despite the fact that the majority of guests are domestic, the staff's English proficiency is quite good.

The restaurant is elegant and dramatic, with an arched ceiling, heavy pewter cloth napkin rings, and large oil paintings. Dining is inside and out when the weather is warm and on Sundays a brunch fills the courtyard under magnolia trees. Most dishes are drawn from regional favorites, but there are also a few specialties from locations where other Quinta Reals are based, plus a range of international selections for those who are burnt out on Mexican food. Service is formal and attentive. 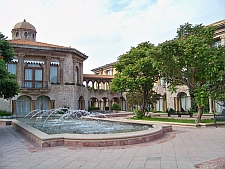 The adjoining bar is open late, with a soft–lit lounge area that has flexible leather seating for small gatherings and another area for those who want to belly up to the bar.

Guest rooms here are all classified as suites, though only the Presidential Suite actually has separate rooms with a door. The Master Suites are the standards, but with a separate sitting area off to the side and plenty of architectural details. It’s worth the minimal cost to upgrade to a Grande Classe suite. These have a living area separate from the bed by a step and two columns, contain a large soaking tub or round Jacuzzi tub, and look out at the courtyard and fountains. The Governor Suites are in a separate building with fountains outside, but are just wide instead of square, with a similar square footage and bath layout as the Grand Classe suites, including a large Jacuzzi. 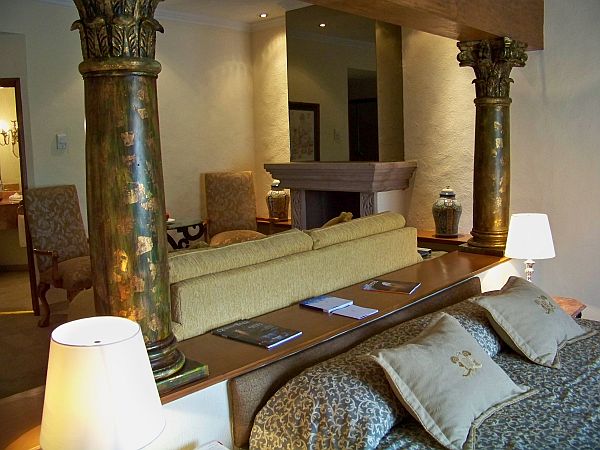 Rooms come with a wide array of amenities, but traditional TVs are in wardrobes and there are no safes in the rooms. They are all dramatic spaces, with oil paintings, gold and bronze leaf, European furniture, and marble-topped tables. Marble baths are impressive and come with plenty of Molton Brown toiletries, toothbrushes and razors, make–up mirrors, and scales. A white lacy curtain is not so practical as a shower curtain for the combo tub rooms, but it looks nice. 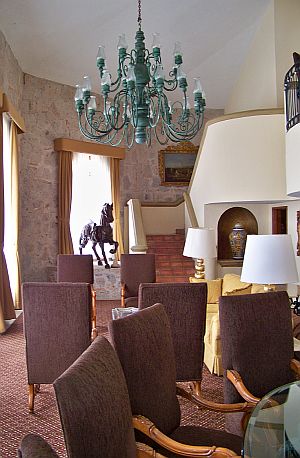 The one Presidential Suite occupied two levels of one unique building, with a cupola at the top and windows all around. It has three separate bedrooms and baths, dining room, living room, and separate sitting area at the top level under the cupola.

The outdoor heated pool is open all year, though temperatures occasionally dip close to freezing in the winter here at this 2,000–foot elevation. It’s a large pool with quality deck chairs, tiled in blue and surrounded by grass. It would be tranquil if not for the buzzing electric fence above the wall around the property’s perimeter.

Oddly, there is no gym on site, but plenty of function rooms serving up to 350 for banquets. Parking is free on site. A business center offers free Internet access, but Wi–Fi in the rooms is $12 a day. A small shop, barely bigger than a closet, sells local handicrafts, business attire, logo wear, and sundries.

For anyone who travels to Aguascalientes, the Quinta Real should be the default choice. This is a solid luxury business hotel with attentive service and rooms that go well beyond the norm.