Approaching its 20th birthday in 2018, Royal Hideaway Playacar is a relaxing beachfront getaway on the quieter side of the Riviera Maya's lively Playa del Carmen 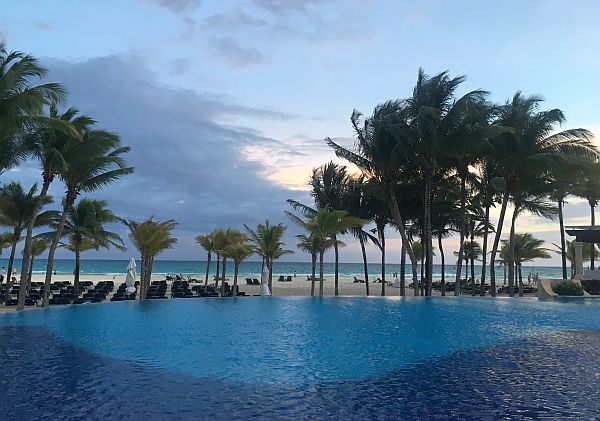 Playa del Carmen's a busy place these days, a victim of it's own success, perhaps. Just when you think there are not many more spaces to fill, a new construction zone begins.

It is possible to still find quiet spots, though, not least in Playacar, a gated community at the south end of the city that has the feel of a leafy, spacious suburb. As well as houses, there's a collection of hotels lining a beach that's far less crowded than those off the central strip. The top resort there is the Royal Hideaway Playacar, an all-inclusive, adults-only getaway, owned and run by Spanish hotel group Barceló. The hotel is also a member of Leading Hotels of the World.

Once beyond the security entrance, Royal Hideaway Playacar makes a grand first impression. Built in 1998, it's a new take on an old hacienda or country house, with a large fountain in the center of the drive. Check-in is friendly and speedy. While our bags and car are taken care of, we fill out the paperwork in a large white lobby where sedate piano music plays, a glass of unusual blue-green champagne brought to us. The relaxation starts here. 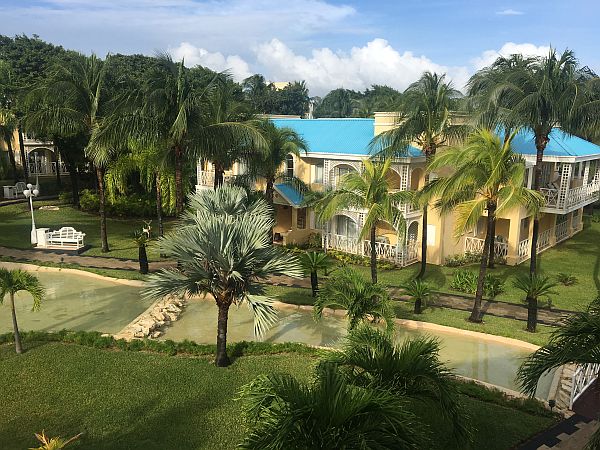 A bellboy leads us through the grounds. There are 200 rooms here, most of them clustered together in blocks. Each building is painted a creamy yellow with blue touches. There's plenty of water throughout the grounds, including artificial streams and a lake up near the main "house" where we checked in and where the restaurants are located. The lawns are thick and green, while tall palm trees wave in the breeze, the combination creating a tranquil atmosphere. During your time here, it's likely you'll spot the occasional iguana, capybara, or woodpecker.

There are six swimming pools too. The most used and busy of these are down towards the beachfront. The main infinity pool, which is long enough for a proper swim and rarely crowded, looks out onto the sand and sea. This and a second large pool beside it are both surrounded by sun loungers. There are also comfy four-poster beds with curtains for shade. Waiters walk around taking drink orders, though you can also order for yourself at the adjacent bar. Nearby, there are a few Jacuzzis bubbling, though they're not heated. 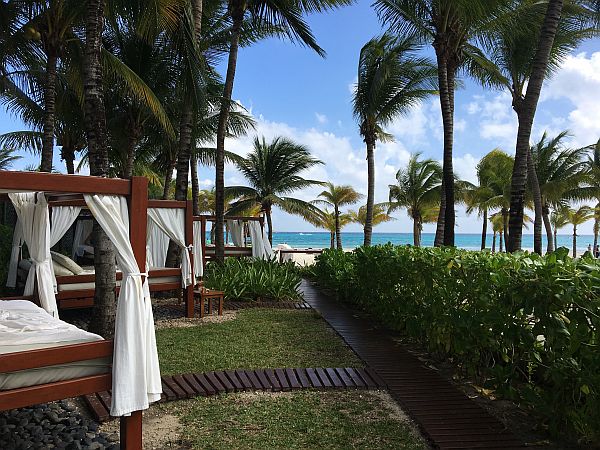 Other swimming pools are hidden around the grounds; it's possible to walk by them, but using the map inside the key card it's easy to track them down. Although they lack the beach view, they're surrounded by palm trees and less popular than the main pools; you can sometimes get them to yourself.

The attractive beach is lined with dozens of double-seater loungers. Each has a collapsible cover that can be drawn up for shade, handy if you plan to spend a day reading or drinking cocktails under the sun. They're free of charge to guests, which is good to see, as some other luxury hotels in the Riviera Maya charge additional costs.

From the beach, look left and you can see the ferry terminal in central Playa del Carmen, which carries passengers over to the island of Cozumel. The beaches on either side of that terminal can get incredible crowded. Here, in Playacar, there's a beautiful stretch of blue ocean and sand, with much more space to enjoy. You'll see the occasional kite surfer, jetski, or boat passing by, and there are volleyball matches by the hotel, but generally this is a place people come to take it very easy. 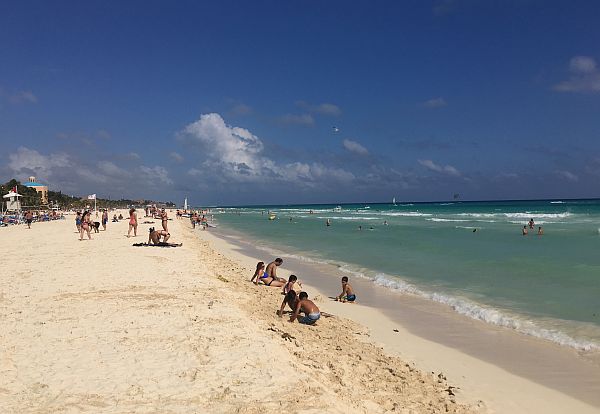 Accommodations are bright, comfortable and modern, with creamy marble floors running through the bedroom, bathroom and a little lounge area by the windows, which look out over the lawns and palm trees, letting in plenty of natural light. There's also a balcony, with two comfy chairs. Beds here are extremely comfortable. Next to the bed, there's a dock for playing music, which takes iPhones, while opposite there's a large TV hung on the wall. Above the bed, there's a fan that looks, when switched off, like a large, orange flower with five petals. There's also AC in the room, though it can be too noisy to have on at night.

These are very pleasant rooms to spend time in, simply but elegantly furnished, and quiet. Being an all-inclusive property, the fridge is stocked with a free-to-take soft drinks and a few beers, which are restocked on a daily basis. There's also 24-hour room service. 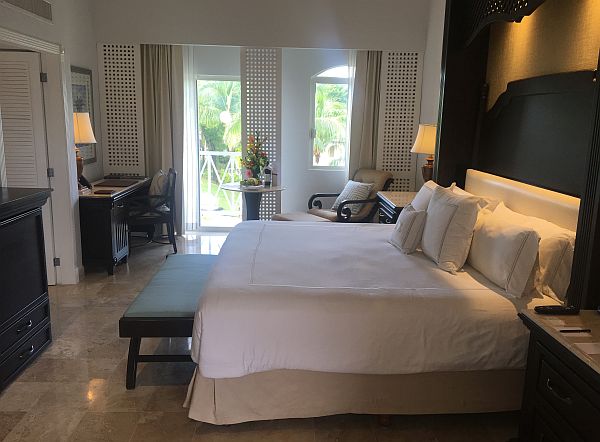 The bathroom has L'Occidental products, plenty of cupboard space and a safe, as well as a bathtub and a rainshower.

Each accommodation block is built around a central forecourt. There's a small office for the block's concierge, who can help sort out excursions, transport, or solve any problems.

There are six restaurants in total, from the Palazzo (Italian) through to Spices (Mexican). Next to the main pool, main restaurant The Deck is where you'll spend the most time for daily breakfast and lunch, with a view of the beach and ocean. The breakfast buffet is plentiful, from pastries and cold meats to large metal pots filled with scrambled eggs, bacon, refried beans and more. 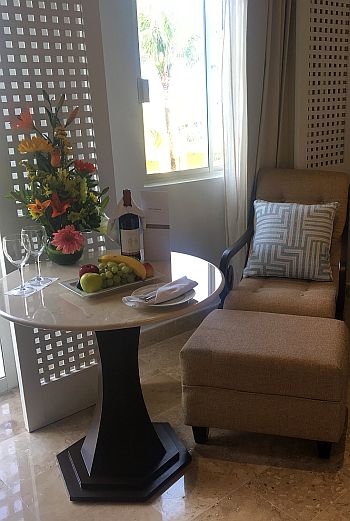 There's enough to choose from, though I've seen more extensive and appealing ranges at other Riviera Maya hotels, where the food has also been of a higher quality, more freshly produced and refreshed more often (rather than food laying out for too long). It feels more like a standard hotel buffet than a luxury hotel's窶排ather surprising since the property long differentiated itself by advertising meals as "a la carte only." Upstairs, Spices restaurant has another deck with a fine view, though this exposed spot can get windy. The breakfast menu here is a la carte, so options are freshly cooked.

Lunch is held on the casual dress The Deck, the menu mainly comfort food, from pizzas to tacos. As with breakfast, it's pleasant and filling, but not as refined or carefully presented as I expected, with several dishes lacking in flavor. You could find better fish tacos at local stands in town; here, they're soggy with coleslaw and served without any spicy salsa, which is almost criminal in Mexico. Staff are friendly, but the service for both breakfast and lunch on The Deck is very hit-and-miss; at times, it was frustratingly slow and a bit forgetful.

The pan-Asian restaurant Azia restaurant is more upscale and formal (no sandals, shorts or collarless shirts), serving mainly Japanese and Thai food. There's a smart Japanese-style bar, surrounded by bottles of sake, with the main restaurant built around two big chef's tables, where you can watch your food being cooked, and quieter, more private seating. There's also a separate tatami room for private groups. Staff here are warm and welcoming, checking in regularly to make sure we're okay. Oddly, the choice of wine during our stay was extremely limited to just a few forgettable reds and whites. (There is a separate wine menu, with additional charges on top of all-inclusive deals, but no one mentioned it here).

Japanese dishes, including tuna sashimi and tempura shrimp sushi, were good. The Thai dishes felt far from the real deal, though, without the authentic hit of spice or flavor; a Pad Thai was more like a plain noodle dish, and the usually warming Tom Yum Goong soup lacked chilli and lemongrass.

The following evening, we ate at Las Ventanas, the hotel's signature restaurant, led by chef Sergi Arola, which has mainly European and international dishes. It's setting is futuristic, mainly white, with white leather chairs, and, good to see, an extensive wine list and glass cabinets filled with bottles. A pianist at the grand piano in one corner provides a gentle mellow soundtrack. The menu features dishes, such as Portobello mushroom ravioli with shrimp, with Rib Eye steak and Salmon among the mains. Staff here also help you to make a night of it, with wine glasses topped up encouragingly. A big hearty cheeseboard of brie, Grana Padana and more rounds off an indulgent evening. 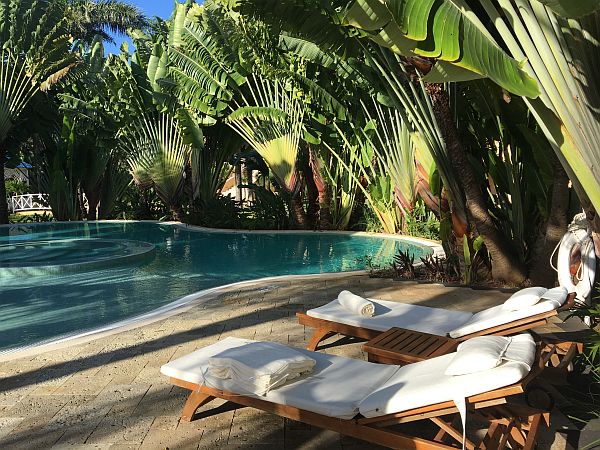 The main house also has a large theater for nightly entertainment, such as a Michael Jackson tribute. They may not win awards, but they're fun shows to watch after a few drinks. Downstairs, a bar area at the back of the main house is also popular at night, with local singers entertaining guests indoors and a social atmosphere outdoors, next to the man-made lake and fountains.

At one side of the house, there's a fitness center and two tucked away tennis courts at the front. There's also a spa, which is quiet small and not as lavish or extensive as in other luxury hotels. A steam room and sauna are tucked away at the back of the changing rooms. Corridors are lit with large candles that give off an orange glow. The spa menu offers a range of treatments, from facials and body scrubs to sports massages to hot stone therapies. I went for a 25 minute shoulder and back massage, and found everything extremely professional, with Cynthia, the masseuse, incredibly thorough and skillful, applying firm pressure, working knots and cracking shoulders while gentle acoustic music played.

Overall, some sharpening up is needed in some of Royal Hideaway Playacar's restaurants, both in the food and the service, which don't always feel like a match for the "Luxury" tag in a region that gets more competitive at that level every year. That aside, though, this is a peaceful, pleasant hideaway with plenty of space to swim, read, or enjoy a cocktail, whether on the beach, poolside or among the vibrant greenery.

Review by Graeme Green, photos by Green and Andrea Moreno