When Rosewood Hotels opened its first property in the interior of Mexico, it set out to launch the most luxurious hotel in the steadily more popular tourist draw of San Miguel de Allende. In more ways than not they have succeeded, in part by having far more land to work with than any other property, yet still being a short walk from the center. 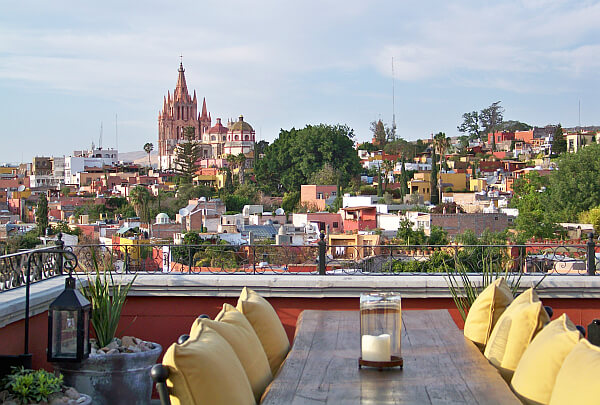 The seed for San Miguel's most impressive hotel came about when one of the city's oldest and largest properties declined and then went bankrupt. The neglected buildings weren't worth saving, so after getting the proper permissions, the new developers razed what was there and started with a blank slate. The result was around 14 acres of real estate that other central San Miguel de Allende hotels can only dream about. This led to a huge outdoor pool complex, a spacious gym, a full spa, a massive lobby, and large rooms with new plumbing and state–of–the–art electrical systems. 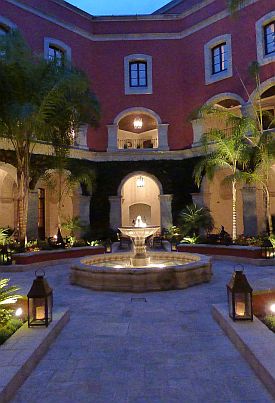 Since opening the Rosewood has continued to expand, adding a huge outdoor wedding space with a view of the city skyline, two tennis courts, a function space bar area, and organic gardens.

Now that the landscaping has matured, it looks like this hotel been here all along. It was constructed in the style of historic grand colonial administrative buildings that grace the main plazas across Mexico, with wide stone staircases, arches, covered breezeways, and fountains in open courtyards. Public spaces and rooms are filled with new furniture, but most of it gives a nod to colonial designs and everywhere there are reminders of where you've landed: locally made light fixtures, pottery, and artwork from Mexican artists abound. The mirrors have even been made to look antique and the type of stone used in the construction will get darker over time.

The architectural effect of Rosewood San Miguel is unusual here: one of space, of openness, light, and breeze. The food and beverage department takes advantage of the pleasant climate in San Miguel de Allende by devoting almost as much space to outdoor dining and drinking as they do to the inside. In the two adjoining ground floor restaurant and bar areas, a large outdoor patio essentially doubles the space. Then on the roof is the favored hang–out spot at sunset and into the night: Luna Bar. This romantic spot looks over the rooftops to Parroquia de San Miguel Arcangel church, the iconic centerpiece of the city. Here bartenders whip up margarita samplers served in hand–blown Mexican glasses arranged in a rack and offer a local microbrew on tap — a real treat anywhere in this country. Mouth–watering snacks and tapas offer a twist on Mexican standards and seafood flown from the coast makes its way into ceviche and other dishes—including fresh sushi paired with tequila on weekends. 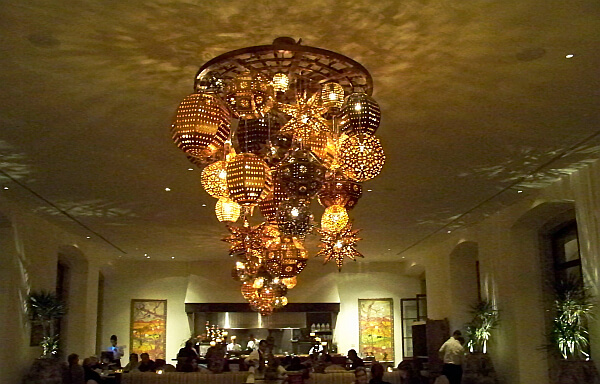 The main restaurant, 1826, is named after the year when the city's name changed to add "de Allende," honoring one of the main heros of the Mexican independence fight against Spain. It's a dramatic space, anchored by a huge light fixture made up of the punched tin lights sold in local markets and craft shops strung together, all styles blending into one impressive glowing bronze whole hung from a rack and projecting designs onto the ceiling. The open kitchen adds to the flair and in a welcome change from most hotel restaurants, there is a food bar set-up where single diners can sit and watch the chefs in action.

The cuisine gets progressively fancier at each meal, starting with tried–and–true breakfast items (including well–prepared Mexican specialties). Lunch gets more imaginative and even the soup and hamburger plates arrive looking like a work of art. At dinner the chef goes all out, dazzling diners with high Mexican cuisine and a few international fusion dishes that are some of the most interesting and tasty in town. A sommelier is on hand to help with a wine list that stretches to 1,000 bottles, most of them stored in a cellar that can host tasting dinners.

The bar across the hall is a comfortable lounge, full of natural light during the day and more dramatic and cozy at night, especially when the fireplace is lit. It's a sedate, clubby space, the commanding bar set up with more than 200 brands of 100 percent blue agave tequila and more than 20 types of mezcal. A certified tequila master hosts regular tastings. YOu can also work out private wine tastings or small group dinners in Cava, the wine celler with more than 800 bottles stored. 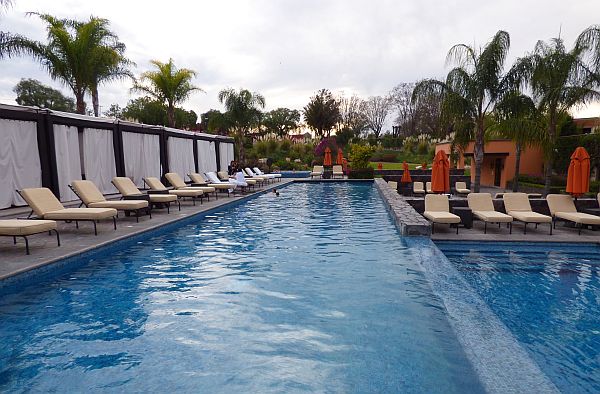 Compared to any other swimming pool in town, just the main olympic–length one here is superior. Flanked by lounge chairs and complimentary cabana spaces, it's just the start, however. The terraced complex includes two more heated smaller pools, a huge kiddie pool by a Rosebuds kid's club, and a whirlpool. You don't have to call room service to get a drink or a snack either: a dedicated Aqua snack bar is open all day and a wait staff circles to take orders.

The gym is similarly outsized compared to any other in town, with a dozen aerobic machines and as many weight machines. A studio space has scheduled yoga, Pilates, and exercise classes with an instructor. The Sense spa is easily the best in town, with only the one at Hotel Matilda coming anywhere close. Everything is first class, from the greeters to the bathroom attendants to the masseuses and beauticians using Sense products. With spa showers, saunas, steam rooms, and a large relaxation area, this spa is more on par with a beach resort one than one in a city hotel.

Despite the large footprint of the property—part of it taken up by owned villas you can rent—there are only 67 guest rooms. They go into 11 different categories, however, ranging from attractive standard rooms loaded with amenities ("Colonial") to huge suites with private roof terraces big enough for a party. Most of the differences are in size and view. All are of ample size, with hardwood floors, furnished terraces or balconies good lighting, and pillow–top mattresses dressed with fine Rivolta Carmignani linens. Huge sliding wood doors open to baths with soaking tubs, spacious separate showers, and WCs behind a door. Most of the furniture, doors, and fixtures were custom made for the hotel and are of impeccable quality. A separate desk area has easy–to–reach outlets, flat–screen TVs are mounted on the wall. DVD players and movies are available by request in suites that don't have them already and the clock radios have phone music connections. Wi–Fi is complimentary everywhere and works well throughout the property. 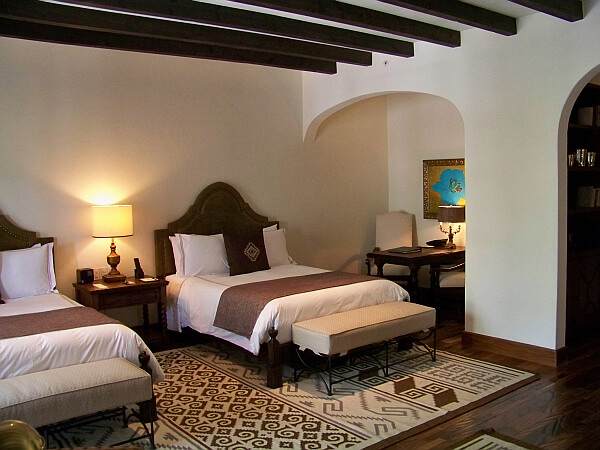 Each level of suite adds more space for lounging, with the two top suites coming with a kitchen, dining room, roof terrace, and a whirlpool tub with a view. Nothing else in the city compares—apart from Rosewood's own private villa rentals of four or five bedrooms. 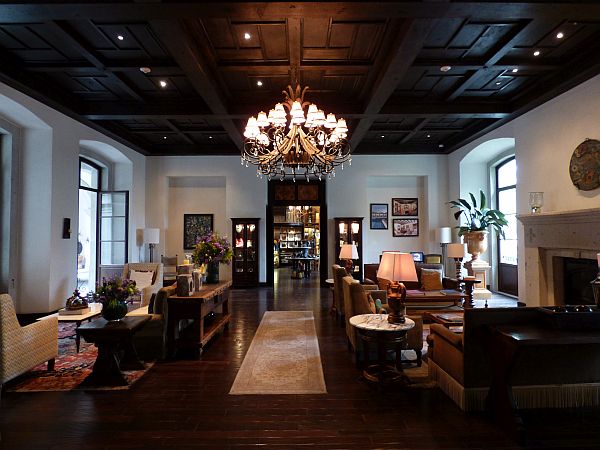 With so much room to work with, meeting and function space are both abundant and the roof terrace alone is big enough to seat hundreds. The ballroom can host banquets for 250 and a small amphitheater brings in local musicians for intimate concerts. An art gallery in the stone–arched basement next to the wine cellar is a nice touch and can serve as a cocktail party space.

Those looking for a true colonial feel with history may prefer the grande dame Sierra Nevada from Belmond and those at the other end of the spectrum may be happier at the ultra–hip Hotel Matilda or newer L'otel. (Follow the link to all of them below). For Rosewood fans and those willing to pay a premium for the biggest and the best, Rosewood San Miguel de Allende is in a class all its own in not just San Miguel de Allende, but compared to most others in central Mexico outside the capital city.