Opened in November 2008, the St. Regis Punta Mita is the second resort hotel to be located within the exclusive gated community situated 26 miles northwest of Puerto Vallarta. Although it may lack some of the celeb–gazing quotient of its neighbor the Four Seasons, its more intimate scale, contemporary architecture and signature St. Regis butler service will appeal to those seeking understated luxury and the ultimate in privacy. 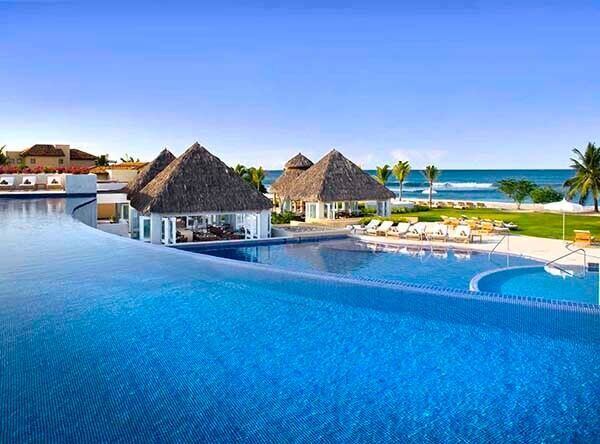 Founded in New York City in 1904 by John Jacob Astor, the St. Regis brand has a rich history that is almost mythic in its association with exclusivity and service. The St. Regis Punta Mita, the hotel's debut in Latin America, doesn't disappoint in either respect. Upon entry, the property reveals itself in sensuous curves that hug the circular driveway and peek–a–boo glimpses of ocean vistas. Upon arrival at the Altimira lobby bar, you're greeted with a chilled facecloth and a welcome glass of champagne (or bottled water/ice tea). There is no bustling luggage scene as is typical in many lobbies. Instead, arrival is a civilized process seamlessly conducted overlooking one of three infinity pools and the Pacific Ocean. 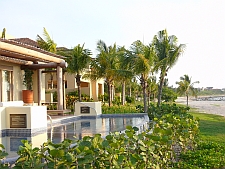 At 22 acres, the St. Regis is less sprawling than the Four Seasons, so you're less likely to see golf carts whizzing around the property. This contributes to an atmosphere of appealing hushed elegance. But it's the St. Regis Butler service that is one of the most visible representations of the hotel's reputation. Butlers greet arriving guests, assist with orientation, unpack suitcases and assure that room preparations are customized to your satisfaction. Functioning as dedicated personal assistants, they manage an array of guest requests or even run quick errands. Plus, thanks to the introduction of wireless devices, you can even email requests from your laptop.

The luxurious accommodations include 89 deluxe double rooms and 31 suites (including a presidential suite), each with its own outside shower and ocean view (with the exception of four rooms with only garden view). Suites include a private outdoor plunge pool and/or Jacuzzi. The property's style, created by architect Hill Glazier with design by Roy Azar Architects is Mediterranean–inspired with the Moorish drama of soaring ceilings, archways and wrought iron infused with European details such as pewter and crystal. Mexican detailing makes an appearance in delicate embroidered linens from Oaxaca and Chiapas. Rooms feature handcrafted tiles, flat screen televisions, a large walk–in closet and 100% cotton Cypress brand bathrobes.

Wireless high–speed Internet is reliable although access to electrical outlets is awkwardly stashed underneath the writing desk in some rooms. A power cord with surge protector would be a good addition. If you like to catch up on the news without powering up the laptop, you'll appreciate the somewhat anachronistic print summary of world news downloaded by satellite nightly and delivered with your morning coffee. 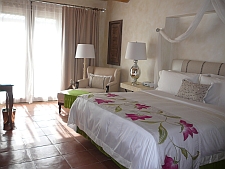 When it comes to the kid's club, the St. Regis has a comparatively smaller kid's scene than the Four Seasons, which many couples traveling without any will view as a plus. So far, this resort appears to be drawing more of a couples and business crowd. The absence of the rumpus of pint–size clientele contributes to an atmosphere of sedate tranquility in common areas. Those seeking even more seclusion can retreat to a private poolside cabana (at a hefty additional cost of 175 to 250 USD per day).

Tranquility is also the motto at the Remede Spa, which features traditional treatments as well as locally inspired signature therapies such as Puebla Hot Stone and Ocean Pearl Body Indulgence treatments. The spa facilities include nine treatment rooms, a spa suite, plus sauna and steam bath areas with exterior and interior lounges for relaxation.

The white sand beach, which although too small for long strolls, has lovely soft white sand rather than the dark gold sand typically found along the Bahia de Banderas. It is also somewhat rocky and windswept so if you're looking for a well–groomed beach you may be disappointed. Nature lovers will appreciate proximity to the UNESCO World Biosphere of Las Marietas Islas as well as the opportunity to spot migrating whales and dolphins offshore. 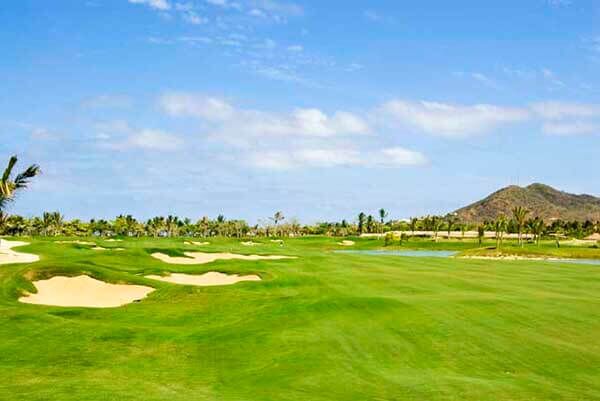 Other recreational options include two Jack Nicklaus golf courses as well as tennis courts (located within the Punta Mita condominium complex) and a gym with cardiovascular equipment and weights. Those seeking nightlife or shopping can request a shuttle or taxi into Puerto Vallarta or Bucerias.

Despite Punta Mita's many natural and man-made recreational opportunities, ultimately, the area is more about retreat than diversion. The St. Regis, the second of four planned resorts for this exclusive enclave, is a worthy addition and will appeal to those seeking tranquility and an exceptional, yet understated, luxury experience.

Review and smaller photos by Michele Peterson, additional photos courtesy of the hotel.