First opened in 2006 on Guanajuato's most prestigious street, Hotel Villa Maria Cristina got a new life a decade later when it purchased several adjoining properties and expanded. This Relais and Chateaux property has regained its crown as the top luxury hotel in this important historic city. 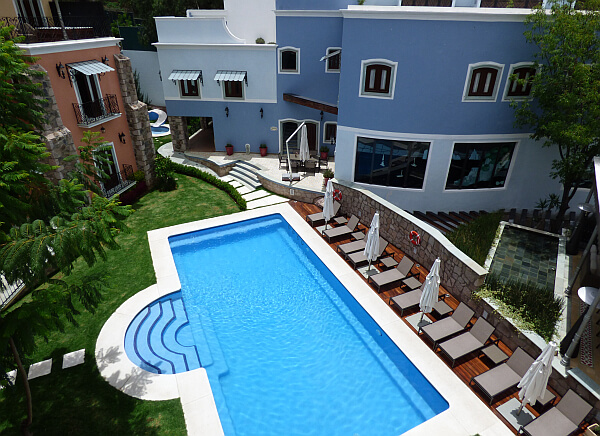 When it had just 13 rooms, Villa Maria Cristina was already a superlative hotel, but with a major expansion that has almost tripled its size, it is now one of the best luxury boutique hotels in central Mexico. From the start it was obviously built with the high end of the market in mind, as evidenced by the Bang & Olufsen phones in the rooms, the Kohler whirlpool tubs, and the Moulton Brown toiletries in the bathrooms. Now that the property has a heated outdoor pool (joining an existing indoor one), sunny gym, second bar, and theater screening room, it is now the top choice in town.

The overall feel is a subdued, refined elegance that begins at the unassuming doorway with brass plaque and extends into multiple courtyards that allow the sunlight to illuminate iron balconies, wicker armchairs, and fountains. After checking in at the single sit–down deck, you'll be more than happy to tip the waiting bellman. The various structures on three and a half levels are connected by a series of stairways that don't seem so bad at first. But they'll creep up and put a burn in your thighs after a couple days of exploring the cobbled streets of Guanajuato. Thankfully the renovation brought several new elevators, so even if your mobility is limited, you'll now move around the property with ease. 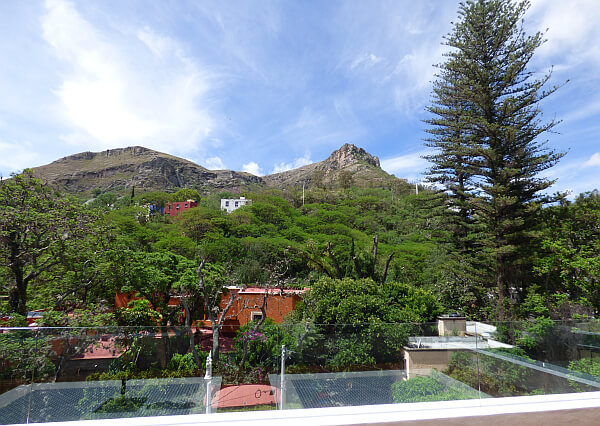 Villa Maria Cristina's restaurant is clearly one of the best in town, and is reasonably priced considering the elegant setting. It gets lonely when occupancy is low, perhaps in part because there is no direct entrance from the street. On the second floor and spread across two rooms, it is an elegant white space with chandeliers, a large fireplace, elaborate molding, corner columns, and crisp linens. Menu items revolve around steaks and seafood, with about half the dishes being jazzed–up versions of local dishes. Both the plates and the service come accompanied with plenty of flair. The expanded adjoining bar is more modern and has one of the best high–end tequila selection in town. You'll probably hear more Spanish than English as it's a favored power broker spot for politicians here in the state capital.

One of the additional buildings Villa Maria Cristina folded into its complex seamlessly is a German-Swiss oddity that now houses an attic function space and a terrific bar area, Caballero. This being the word for Mexican cowboy, the rough stone walls are decorated with equestrian art and interesting memorabilia, while the furnishings are closer to what you'd find in a hacienda rather than in a posh hotel. 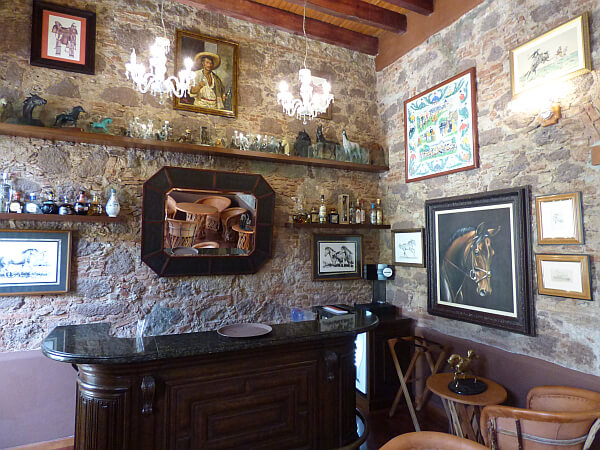 At the bottom level of the hotel is an attractive spa with an indoor pool, whirlpool, sauna, steam room, shower facilities, and massage rooms. A lounging terrace on the second floor facing the mountains has an open air Jacuzzi big enough for four. In one of several new courtyards is the new heated pool, however, which is outside in the sun with plenty of lounge chairs. The nearby gym has a view now through a wall of glass and has a good range of aerobic and weight machines. There's also a kids' club with custom murals on site now, with plenty to keep the little ones occupied—something that nobody else is offering in Guanajuato.

You can choose from a variety of room sizes and layouts, ranging from cozy standards with a double bed to the master suites with Jacuzzi tub. Plus there's now a full-blown villa with multiple bedrooms that faces the mountain. All except that modern villa are decorated in a reserved and relaxing style, with lots of whites and creams offset by custom dark wood desks and end tables. A series of wood shutters and carved doors with glass panels are used to regulate the natural light since most of the original rooms face a courtyard rather than having a window to the exterior. Unfortunately this means you have to do lots of latching and unlatching for those rooms depending on your state of dress since guests walking by can see in. Fortunately, robes (and slippers) are standard in all rooms. Also standard are flat panel satellite TVs with a wide range of English channels, a good depth of toiletries, generous closets with a selection of hangers, electronic safes big enough for a laptop, and some of the most comfortable mattresses in central Mexico.

Rooms without a whirlpool tub get a steam shower. With a push of a button and a short wait, your oversized marble shower turns into a very effective steam room. If you're a tub person though, you're out of luck in a standard — you'll have to go for one of the junior or master suites. These provide more space and furniture, plus a separate shower in addition to the whirlpool tub. 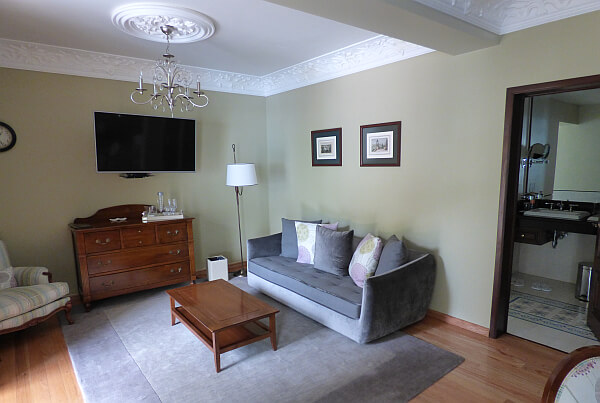 In general the newer rooms and suites have more light, all new fixtures, and more outlets. Otherwise it's hard to see where the older part ends and the new part begins: the architects did a terrific job sourcing tile and designing hallways to make it look as if the hotel has always been this way. The best rooms are the suites, however, and compared to what you'll find in Europe or the USA, the rates are quite reasonable. Some have their own whirlpool tub on a deck with a view and a soaking tub inside as well.

Free Wi–fi coverage extends throughout the hotel and parking is available on site. 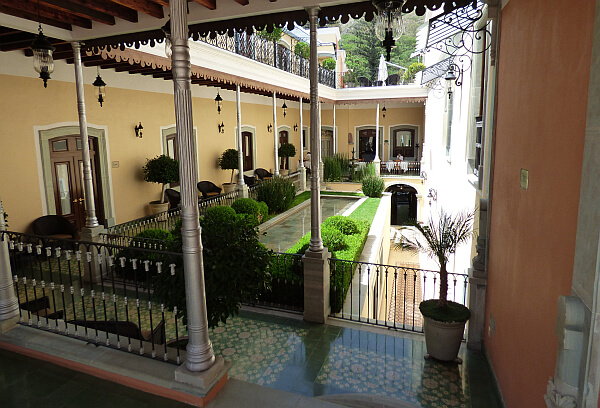 English proficiency is still quite spotty after a decade of operation, a sign that the foreign market is still not a majority of the total guests. Overall though, Villa Maria Cristina is a hotel that has gone from good to great with the expansion and renovations. While those who want to be in the heart of the action may prefer Hotel 1850, skilled architects and seasoned managers here have raised the bar on what's possible in Guanajuato City.

Web Address: www.villamariacristina.com or at Hotels.com
Total Number of Rooms: 36
Published rates: $240 to $980 including continental breakfast.