Perched above a near perfect private beach amid a craggy coast on the isolated southwest corner of Isla Mujeres, away from the day–trippers from Cancun, Zoetry Villa Rolandi Isla Mujeres is a testament to rest and relaxation. 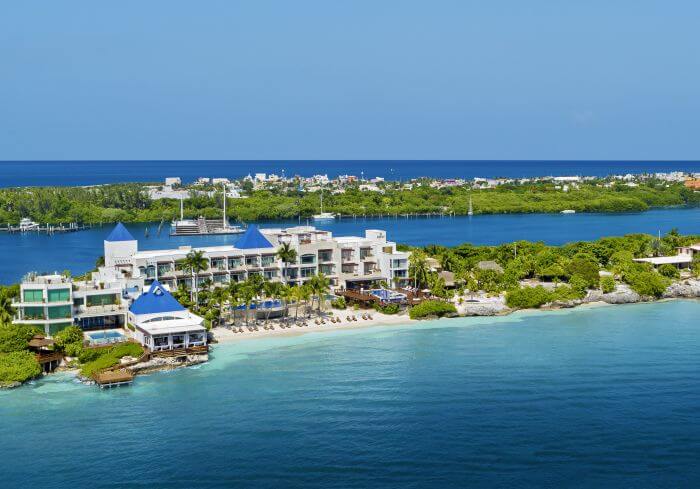 Though it’s only a short ferry ride from Cancun, the tiny enchanted isle of Isla Mujeres—it was considered sacred to the Mayan Goddess of childbirth—bears little resemblance to its more popular jumping–off point. Near the ferry dock there is a cluster of shops and seafood restaurants offering 2–for–1 drink specials and a scattering of hotels and small resorts, but the rest of the island’s interior is densely forested and small boat workshops line the lagoons and shore. On the southwest coast, the farthest point away from the center of town by road because of the way it curves, is Zoetry Villa Rolandi.

The hotel isn’t overly contemporary or trendy. The décor is not overly complicated and the property looks like a small hotel transplant from the Adriatic. Yet Travel & Leisure still named it one of Mexico’s best. 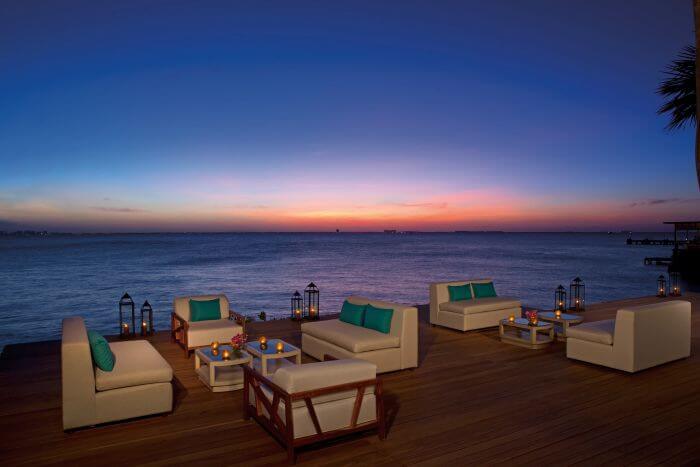 Though isolated, the setting, on a thin strip of land between the beach and a central lagoon, is superb. Direct yacht and catamaran service from Cancun brings you directly to the front door. Enter through a lobby full of stained glass that leaves an enchanting colored glow and to the left and above are the rooms, straight ahead are the three blue tiled pools, and to the right is the restaurant that extends dock-like over the Caribbean. The shore is not the wide sweeping white sands seen on the north side of the island, but rockier except for the stretch of sand that fronts the entire length of Zoetry Villa Rolandi. This has enough space for a dozen chairs and a few kayaks.

Water is nice. Especially when you want to relax. It’s soothing. It’s an essential component to most spas, including Villa Rolandi’s Thalasso, but here they also incorporate it into the fabric of each guest room. In their Grohe showers, water spouts out from 8 different heads from a number of angles including from the sides and behind. The shower will also turn into a steam room with the click of a dial and the surround sound stereo will even pipe in through a speaker. The bathrooms feature a sparkling beige marble that continues on the floor of the main room.

The smallest of the spacious rooms are 450 square feet and include an elevated bed area looking down upon an open living area with couches, minibar (free for guests), 42” flat screens, and satellite TV. Walls are all white with a couple of small oil paintings of coastal scenes. A thick red curtain separates the rooms from the large terraces that all face the ocean and pool area and are set with a table and a few beach chairs. Apart from the three standard rooms, all of the other guest rooms are suites (Junior or the larger Junior Deluxe) and have a Jacuzzi on their private terraces. The three–level Presidential suite adds dining and sitting areas. 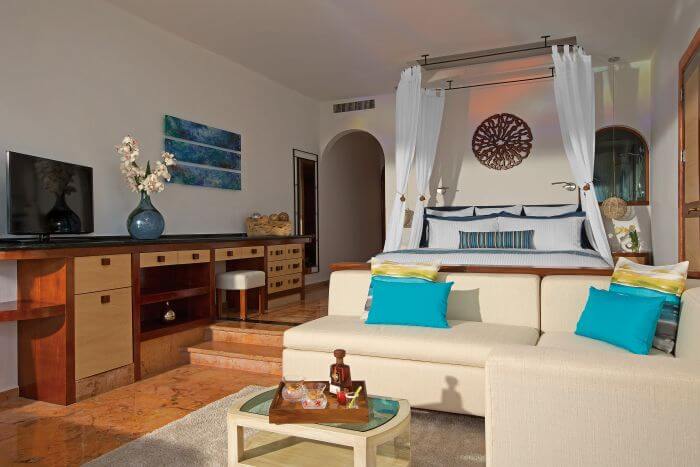 The hotel’s Casa Rolandi restaurant ties in with the owner’s successful chain of Rolandi’s Pizzerias and one other Casa Rolandi restaurants that have been operating in several locations along the Riviera Maya for three decades now. The Isla Mujeres restaurant, a AAA Five Diamond Award winner, has a classically trained wait staff and Swiss/Northern Italian menu with handmade pastas, seafood (including a great grilled octopus), and a varied wine selection that dabbles in South America and Europe. A wood–burning oven bakes bread and several Mediterranean fish dishes.

Many of the treatments for the hotel’s Thalasso Spa sit on a platform overlooking the ocean (others are in private rooms). The spa is the most complete on Isla Mujeres and features mud baths, algae baths, Seaweed wraps, sunburn treatments, hot stone massages, and Reiki.

Compared to the island’s other hotels, most sitting on the northern shore on a large public beach, Rolandi’s is smaller and far more intimate. It’s a hotel that stands all by itself, perfectly secluded, with Swiss–quality service and no hint of gimmicks or brashness that the rest of the region seems to covet.

Review and photos by Nicholas Gill, photos courtesy of hotel.