The Yucatan in style with Catherwood Travels

The interior of the Yucatan Peninsula is a world away from the beaches and manufactured adventures most visitors see to the east. This is the land of Mayan ruins, underground pools, and grand haciendas, offering unique experiences to a lucky few who hook up with the top tour company in the Merida region. 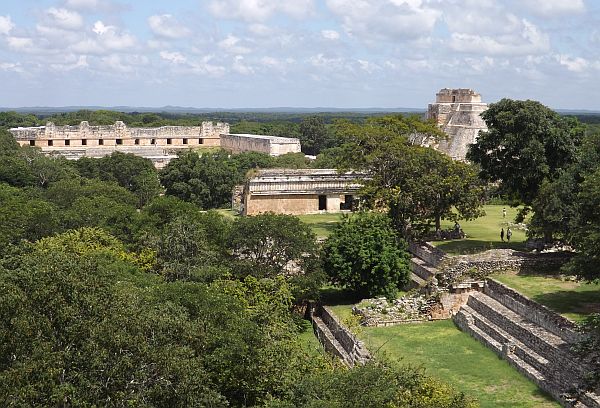 In the first few hours we have lunch among the ruins of an abandoned ranch, swim in a private cenote, and visit one of the Seven Wonders of the World after closing time. This is not going to be a routine travel tour.

The vast majority of tourists who come to Mexico's Yucatan interior see most of it from a bus window speeding along a highway. They spend all day riding to get a quick tour of Chichen Itza during the hottest time of the day, when the light is all wrong, and then return to their resort on the Caribbean coast. For those who take the time to explore the interior with Catherwood Travels, however, the trip goes from routine to ?Wow!?

Catherwood is an offshoot of the family business that owns the hacienda hotels managed by the Starwood Luxury Collection, near Merida and Campeche. They also own several private haciendas that they rent out as villas and have access to others used for functions. The owners founded the tour company last decade when they found they couldn't hire any company for excursions that provided the same top–notch experience as the haciendas. So they snatched up the best archaeologist guides, invested in training staffers in how to deliver luxury service, and hired cooks who could deliver Yucatan specialties with flair. They now run an integrated tour company that can control the whole experience, from spectacular meal locations to sleeping quarters owned and staffed in house. 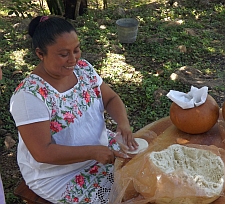 We see all of this on our very first stop, with lunch at an abandoned ranch, on land the company owns. Getting out of the van we?re welcomed with cool towels and cold beers, a table set up for us in the shade. Soon the food arrives, the first course being colorful bell peppers stuffed with a local recipe: smashed pumpkin seeds mixed with onions, tomatoes, cilantro, and chilies. We dip fresh tortilla chips in that before moving on to cochinita pibil, the flavorful slow–cooked pulled pork dish, served with rice, beans, and tortillas hot off the griddle. We top it off with some coconut ice cream, a welcome end in the afternoon heat.

"Would you like to go swimming?" our guide Julia asks. "We have our own private cenote here."

There are no rivers in this part of Mexico. Due to some unusual geological traits having to do with limestone crevices and a giant meteor, all the streams and ponds here are underground. All over the region are cenotes, or underground pools. Their constant temperature makes them great swimming holes, so we gladly descend the stairs and dive in. The sun pokes through one hole at the top, while vines descend down to the water. This being a high–end tour, there are even foam noodles to float with since we can't touch the bottom, fluffy towels and bottled water at the ready when it's time to get out. 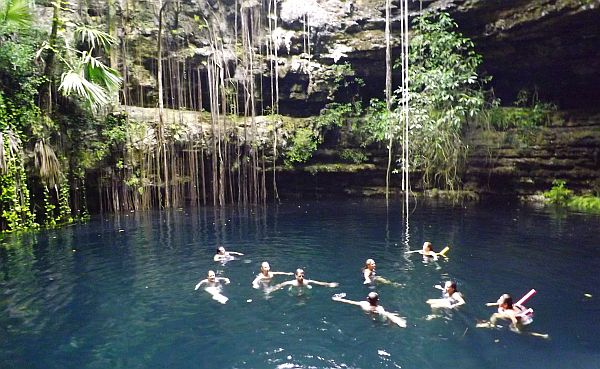 As the sun is heading toward the horizon, we ride to Chichen Itza, properly called Chichén Itzá — with accents on the second syllables. We arrive as the last of the sweaty Cancun tourists are heading to their buses and the souvenir sellers that have taken over the once–serene archaeological site are packing up their wares. Our guide Alfonso Morales is a noted archaeologist who has been part of major discoveries at Cop?n in Honduras, Caracol in Belize, and Palenque in the Chiapas state of Mexico. "Probably 98% of what you hear the guides say at this site is b.s.," he tells us, "and any book more than 10 years old is dead wrong." Thanks to advanced science and more careful study of writings, many of the old assumptions about the Maya have been turned upside down. Most of the local guides, however, haven't bothered to keep up. 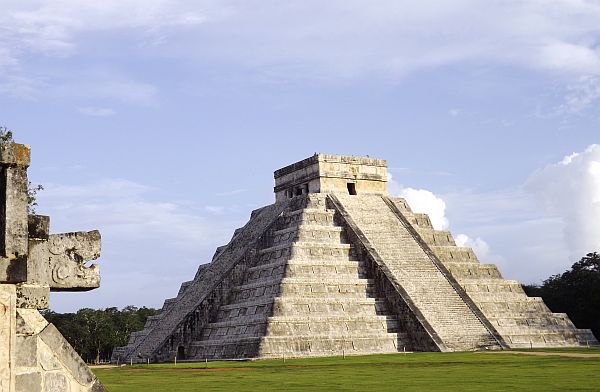 Morales also has connections, so as the other tourists are clearing out at closing time, we sashay in and see a Chichén Itzá devoid of crowds and swarms of vendors. We wander the grounds alone, guided by an archeologist who knows the real history and and how we've discovered it — a true VIP experience. Instead of the usual washed–out photos full of other people snapping photos, we can stand in awe of the glorious pyramid as it glows in the last light of the day. If there are any people in the photos, they're us.

That night we check in at Hacienda Temozon, the largest hacienda hotel in the region. Still, "largest" is 27 rooms, so it still feels much like a private estate. This 16th century manor house was the first one of the group to be fully restored, beginning in 1994. Before and after photos are in the library. They show that the bones of the building were left in place, the main changes being a swimming pool behind the main building and the transition of storage or stable rooms into luxurious guest rooms. Old farm machinery and rail cars that traversed the property on narrow tracks are reminders of how the land was originally used.

We have a late dinner at over–the–top Hacienda Tekik de Regil, an ostentatious mansion with Corinthian columns spaced across an entrance terrace more than 200 feet wide. Just inside are hand–painted murals, restored from the originals, and carved stone doorways leading to two grand suites and function areas. "When this region was really booming," Miller explains, "there was kind of an arms race between hacienda owners, each trying to outdo the others with a more impressive ranch house." Ironically, the owners seldom stayed on site more than a few days at a time, preferring the more social life of their mansions in Merida.