Exquisitely handcrafted villas occupy a private island in Lake Nicaragua, a dramatically natural setting so close to Granada that you can hear the cathedral bells. 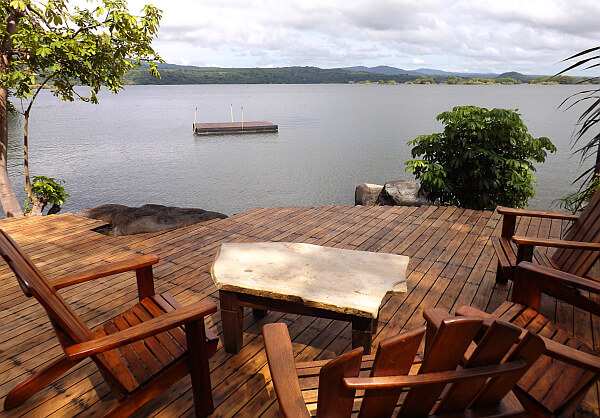 Nicaragua’s architectural showpiece, the 500–year–old city of Granada, is best known for its rows of Spanish colonial homes and hotels that line the bustling streets. But there is another side to “La Gran Sultana del Lago,” which has for so many centuries stood sentinel on the shores of Lake Nicaragua’s sparkling expanse.

Just south of the tranquil, pearl–gray beaches that line Granada’s oft-ignored lakefront, lush Asese Peninsula curls several kilometers out into the massive lake’s hyacinth–strewn waters. This forested cape is fringed with 365 islands, collectively known as the Isletas de Granada, created in a single explosive eruption of majestic Mombacho Volcano, still rising to a ragged crown high above its creations.

And at the tip of the Asese peninsula, hidden within this serene seascape, is the island of El Jícaro. In 2009, this 500–square–meter private isle, lapped by gentle waves, became home to a gracefully handcrafted luxury ecolodge that easily eclipses even the finest hotels in Granada’s city center: El Jicaro Island Ecolodge

The adventure begins at Marina Cocibolca, where your personal driver will introduce you to the crisply uniformed staff member at El Jicaro’s mainland offices. After a brief introduction, he or she will escort you to your lancha, one of the brightly painted pontoon boats that day–trippers hire for island tours./

Gliding through the breezy isletas is a joy in itself. The trek to El Jicaro meanders past tiny rocky promontories with space enough only for a flowering tree and lone white egret, sharply contrasted against the enormous jungle islands of Zapatera and Ometepe, their mysterious volcanic peaks hazy in the distance.

Other, larger isletas are home to modest tin fishing shacks and fabulous vacation mansions, where well-heeled Managuans take respite from the city. And as you flow between the emerald–forested isles, the lament of howler monkeys mingles with the distinctive melodies of a multitude of songbirds, eventually eclipsing the faint sound of Granada’s honking horns and car alarms melting into nature’s symphony. 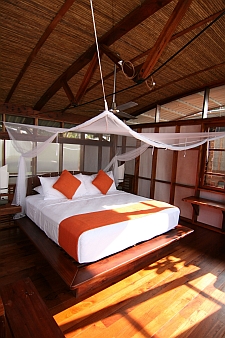 All too soon you’ll arrive at the resort’s stone dock, where a representative (attentive service is one of El Jicaro’s consistent standout attributes) will greet you with a cool towel and refreshing beverage, perhaps grama, a sweetened tea of steeped local grasses considered Granada’s signature beverage. Welcome to your own private island.

There are only nine marvelous, two–story villas on the rugged little isleta, imaginatively designed to blend seamlessly into this mountainscape in miniature. Flagstone trails wend through the rocky forest floor between them, where a fragile ecosystem was carefully conserved during construction and delicately landscaped afterward, using permaculture principles. These exuberant gardens, into which the resort was so perfectly inlaid, interweave native flowers and trees into an optimum environment for all.

The rich glow of tropical hardwoods, primarily the burnished reds of windblown cedro macho trees felled in a recent hurricane, gleams through the tall trees. The entire resort is a masterpiece of fine carpentry, courtesy of the architects and artisans at Simplemente Madera, also the geniuses behind Morgan’s Rock.

El Jicaro’s owner, London businesswoman Karen Emanuel, had stayed at Nicaragua’s best-known ecolodge, and was inspired by their commitment to sophisticated sustainability. “Then I came to Granada and thought, ‘why isn’t there something like Morgan’s Rock here? I’d stay there.”

The next day, she saw a hand-written note tacked onto a café billboard: “Island for Sale.” Her blog—a fun read for anyone who has ever fantasized about opening a luxury hotel in Latin America—details all that followed. Her dream was to build a unique and truly luxurious, yet socially and environmentally responsible, property. With the help of Simplemente Madera, Cayuga Sustainable Hospitality, a Costa Rica–based collection of six luxury ecolodges including Lapa Rios and Finca Rosa Blanca, she has succeeded.

After finishing the cool welcome beverage, allow yourself to drink in the details of your expertly crafted villa. The ground floor, a soothing space for meditation and relaxation, can be smoothly transformed into a second bedroom. Step outside to enjoy a thick, cotton hammock that takes up most of the narrow wraparound porch, suspended just above the waves. This is where your rich organic coffee is invisibly delivered each morning, served alongside sugar bowl made from the thin, strong shell of the jícaro fruit.

Or climb the smooth staircase to the master bedroom, a vision in dappled golden light filtered through the forest canopy where you’ll sleep. The artistry is exquisite, with sliding windows and walls that allow you to balance raw nature with private intimacy to your own tastes, high above the water. The solar–heated rainforest shower (bathe in the evening, not the cool morning), with its slender, polished slats, offers a sense of connection to this watery environment.

This is a true ecolodge, so be aware that there is no television or air conditioning onsite; the ever-present lake breeze and open architecture offer more than adequate relief for most of the year. (There is Internet access, however, in a thatch–roofed bungalow overlooking all this beauty.)

People with mobility issues may find the uneven flagstone trails difficult, but the island is small, relatively flat, and self-contained; most excursions are by boat. The Zen-inspired spa and yoga platform—you’ll find few finer places to stretch in this lifetime—are also designed with wellness issues in mind, making this the perfect retreat from the world. 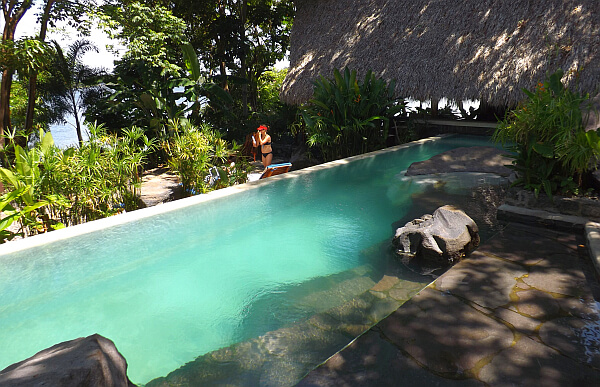 The small island may also make some travelers feel a bit claustrophobic; though you’re welcome to swim in the remarkably clean water, or paddle around in El Jicaro’s kayaks, this setting isn’t for everyone. Children under 12 are generally forbidden, as the rocky shoreline, three-story mirador (overlook), and deep, cold plunge pool can’t be watched at all times.

Adults will certainly enjoy cooling off in the organically shaped pool, built around enormous volcanic boulders that remain on site. The view across what was once known as Cocibolca, “The Sweet Sea,” is an invitation to a variety of tours along its other shores. Guides will take you to secret hot springs, traditional coffee plantations, crumbling Spanish fortresses, screaming canopy tours, and of course the city of Granada itself, with its museums, churches, and fine dining.

But do yourself a favor and return to your private island to enjoy some of Southwest Nicaragua’s finest cuisine. Healthy, gourmet dishes are creatively concocted from this country’s cornucopia of fresh, seasonal, and often organic ingredients by Chef Cally Prezzano, a Bay Area–trained chef offering a truly gourmet experience. While the exhibition kitchen turns out an international-caliber menu, many dishes are Nica classics, which you can sample here if you won’t make it to an authentic market food stall. 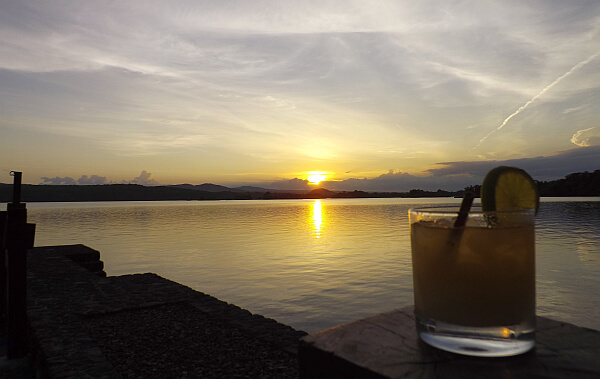 The airy, beautifully furnished restaurant would be a joy over a simple piece of fruit, overlooking the island’s fire pit and cenote, a Mayan–style well that links the resort to the lake itself. This is important.

El Jicaro is a unique boutique property, and because of its fantastic yet inconvenient location, and serious commitment to sustainability, the resort won’t be every discriminating traveler’s choice in Granada. As a luxury ecolodge, however, it just about perfect, and really raises the bar—in the most responsible way possible—for Nicaragua’s nascent luxury travel scene. Enjoy.