Traversing the Panama Canal is a special experience, even from the deck of a packed cruise ship, but on the Discovery it's a more intimate and unusual trip across the isthmus. We receive a briefing before entering the Miraflores locks, with colorful information on both the history and what's in store for the future. "See that mountain there?" asks our guide, pointing. "That's got to go. It's in the way of the new canal extension." Sure enough, as we get closer we see huge earthmovers were already at work taking it down, making room for the new multi–billion dollar project that will host modern container ships and allow the canal to host some 10 percent of all world trade traffic.

Going through the locks involves a lot of waiting and anticipation, but with the Discovery's lounging areas and the great views, it never seems tedious. 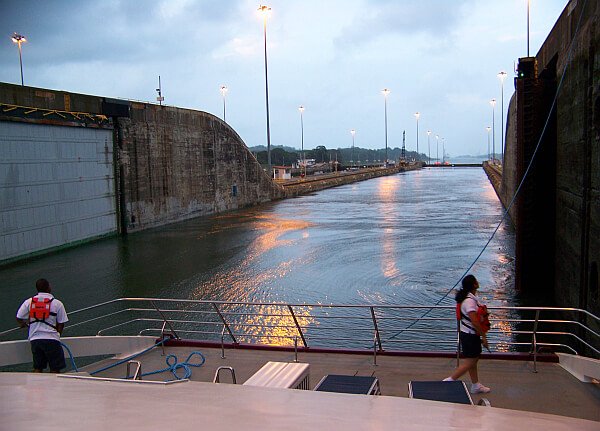 After getting through the locks, we make a stop at the Gamboa dock to load up on supplies. I can't help but notice that most of these supplies are Balboa beer and Ron Abuelo rum. Apparently we've been having an especially good time thus far.

What really makes the Discovery's transit special, however, is the chance to overnight in the canal itself. We anchor near the Barro Colorado Island Nature Center, where the Smithsonian Tropical Research Center is headquartered. The island was established as a nature reserve in the early 1920s and was put under the care of the Smithsonian in 1946. As the canal was handed back to Panama in the late 1990s, several surrounding peninsulas were added to the Barro Colorado protected zone. To say the area is teeming with nature is like saying the canal gets a bit of freight traffic. While there are 44 species of bats in all of the United States, there are 70 species just on this small island.

We take a Zodiac boat ride around the island itself with Smithsonian guides, then explore the Gigante Peninsula part of the park by foot with them the next day. There are spiky palms and determined monkey climber vines, plus a prize spotting of a Slaty–tailed Trogan, a cousin of the Resplendent Quetzal. There are Red–capped Manakin birds though, plus spiders, Army ants, and Aztec Warrior Ants. We spot several Dot-winged Antwren birds above, but they're not really there to eat the ants. When the Army Ants are on the march, the crickets and beetles get out of the way. So the birds follow the front of the ant path. They pick off the bugs that have escaped one threat and met their demise by another.

We hear the howler monkeys before we see them. Their primeval growls have launched many a horror movie sound effect, working as the sound of alien creatures, dinosaurs, or mysterious monsters in the dark. We come upon a whole tribe of them, with a mother helping a child along and a male scarfing down as many leaves as he can get his hands on while hanging from his tail. Our guide Richard sets up his tripod and aims the viewing scope at another male who is sitting on a branch. With the scope we can see a growth on his neck and worms crawling out of it. "That comes from a parasite that lands on your head, gets into the largest pores on your whole body, then lays its eggs. Next thing you know you've got a bump with worms coming out of it. Quite painful as you can imagine." Without saying a word, two of us instinctively put our hats back on. 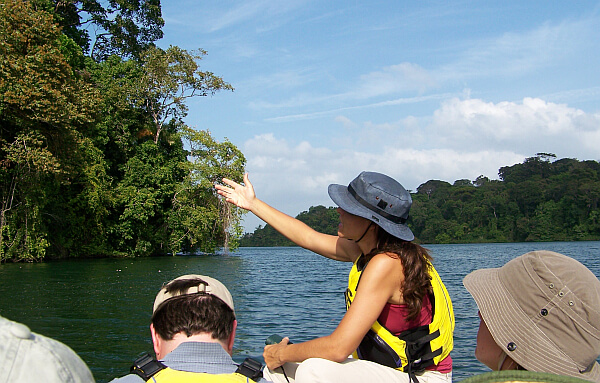 This lake was once a vast valley, filled in over a period of four years by the inflow from the Chagres River. Now the lake is so large it can get rough with whitecaps when the wind is whipping through. The peninsulas and islands we explore are mostly mountaintops that were the last bits of land left standing. This history creates a problem for boats. Three times our Zodiac hits a submerged treetop and the motor conks out. Fortunately our propeller survives, but we wouldn't have been the first to lose one completely. Sometimes fishing boats get too close to the shore and are stopped dead by a rock or tree just under the surface. Our guide says he has seen four men launched through the air simultaneously, like circus performers being shot from a cannon.

Towards the end of the dry season, the water level drops by several feet, creating an eerie scene reminiscent of a watery graveyard, with dead tree trunks protruding from the water like jagged tombstones.

The big ships are confined to a deep channel, so they are not affected. They move through all day and all night. Despite a channel that seems plenty wide, two of the islands will get shaved off as part of the canal expansion, however. One of the turns is too tight for container ships. 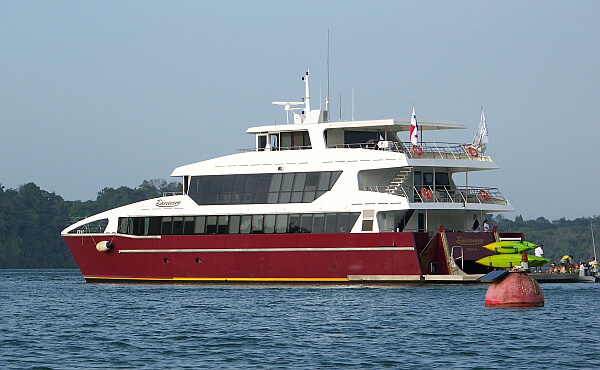 We depart the lake through the Gatun Locks as the sun is going down, with a sailboat beside us and a huge tanker behind us. Here the locks step down to the Caribbean, so at times we are higher than the container ship in front of us. It is a wonder to watch water pour past huge steel doors that are 7 feet thick, weighing anywhere from 390 to 730 tons. It is all held in by concrete walls 65 feet thick, in places dinged and scraped from ships that could barely squeeze through.