Story and photos by Beverly Gallagher

Six in the morning, a tap at the door and a hot cup of coffee prompts the transition from fishing dreams to fishing reality. Thirty-one foot Bertrams roar their engines while anglers finish up the last bites of a quick but hearty breakfast. Like race-car drivers to a starting line, piscators jump aboard. The mate moves swiftly, checking the equipment, while the captain talks up what’s to come: an inshore stop to catch bait before heading offshore to Zane Grey Reef for billfish and sailfish.

Motoring out into Piñas Bay, nestled within the infamous Darien, the calm, deep ocean is reminiscent of tar. Glacier-blue waves crash against volcanic cliffs covered in some of the densest forest on the planet. The imagination runs wild. It is no wonder some have coined the area the “Jurassic Park of fishing.”

The Tropic Star Lodge is a strategic launching point for world–class sport fishing trips on Panama’s Pacific side in Piñas Bay, near the Columbian border. Sitting along the Gulf of Panama, home to the continental shelf seabed, the area draws a wealth and diversity of bottom fish and pelagic gamefish.

Weather also plays a role, mixing with the area’s unique geography to create the “perfect storm” at different times of the year, treating deep sea sport-fishing aficionados to gamefish normally found only at great depths, ordinarily beyond the reach of normal charter fishing trips.

Fishing outfits ring the Gulf of Panama: from Piñas Bay to the outer edge of the Azuero Peninsula (Tuna Coast), to the zone between the “explosive dumping area” and adjacent San José Island of the Pearl Archipelago, to the Hannibal Banks area around Coiba Island. There are a handful of top outfitters positioned near these prime locations.

In Piñas Bay, the Tropic Star Lodge has had a long and colorful history. Built as a private getaway in 1961 by a Texas oil tycoon and opened to the public four years later, the reclusive, 18-room resort has since drawn the sport–fishing crowd, celebrities, and travelers looking for a safe and comfortable place to explore the Darien. Largely attracting anglers, the Tropic Star Lodge currently lays claim to more than 250 world records which have been set or broken in Piñas since its inception.

Because the lodge has practiced strict conservation efforts over the last twelve years, promoting a catch and release method using circle hooks, the Tropic Star receives a lot of repeat clientele confident the fishing will more than meet their expectations. “There’s always something biting,” says Albert Battoo, Tropic Star’s Doc Master. Rewarding these conservation efforts, the Panamanian government has declared a 20–mile radius around Piñas Bay off limits to any commercial fishing. 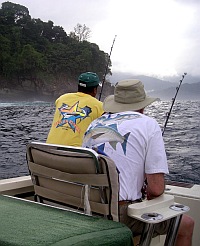 “We have phenomenal fishing,” says Battoo. To ensure anglers feel completely satisfied, Battoo recommends that you “do your homework to know what’s biting.” Prime time for black marlin is mid–November to mid–March, blue marlin from July through September. Sailfish are present nearly year–round.

Surprisingly, it’s not all fishing. The lodge also has a pool area with games, sea kayaks, and a small but inviting massage room. For beach time, a hilly 30–minute trail leads to Playa Blanca (White Beach). Further afoot, guests can complete a two–hour trek to a waterfall or go on an excursion to an Embera Indian village.

On Boca Brava Island in Chiriqui province sits the Panama Big Game Fishing Club. Described as more “laid back” by its guests compared to its Piñas Bay neighbor, this doesn’t mean the fishing is any less exciting.

“We have the Islands of Ladrones, Montuosa with the underwater sea mounds around them, Hannibal Bank, and a 300–foot drop off runs just outside of all three,” explains Captain Lee A. Campbell. “And we have over 40 miles of islands and coast line for inshore fishing.”

In terms of equipment, Panama Big Game offers a 27-foot Roballo, 28–foot Albermarle, 29–foot Phoenix and 31–foot Bertram, all with tuna tubes, fighting chairs, and heads. Each boat is outfitted with two 80, two 50 and four 30, two jig rods and two spinning, including all tackle and lures. Panama Big Game does not include fly fishing gear but they do provide teasers—both artificial and hook-less rigged baits.

Back on land, guest accommodations spread across landscaped gardens in four cottages. Apart from relaxing on the patio, there is a clubhouse with a large bar and a lounge topped with an observation deck with views of both the ocean and the inland waterway. The dining area is overseen by the very capable owners who bring over thirty years of restaurant experience with them from Florida.