Secret Beaches of Panama and Costa Rica on an UnCruise Adventure

Through the Panama Canal and up to the Nicoya Peninsula of Costa Rica, this small ship adventure tour from UnCruise gets you on, in, and beside the tropical waters of Central America every day.

After I walk past the second empty beach, I hear a terrible squawking up ahead. It sounds like a violent attack, so I quicken my pace to catch the commotion. When I get to the source, I see a pair of scarlet macaws glowing in the sunlight, wings flapping as they change positions around the tree branch. I've caught a couple in the middle of their mating session and they're not shy about it. The whole jungle knows what's going on.

I've broken off from the crowd to go for a nature walk by myself, but there's never much of a crowd anyway on an UnCruise. Our small ship, which can get into secluded bays where we're the only boat around, has 32 cabins. That means even at full capacity, no place we land gets overwhelmed. We get to know each other at the open bar sessions and meals, then explore nature's playground on kayaks, paddleboards, skiffs, on foot, and with snorkeling gear. 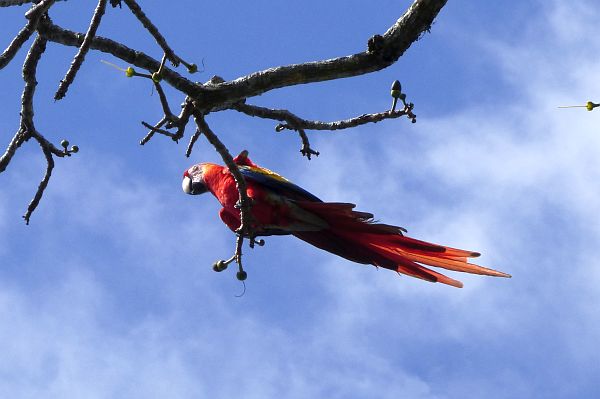 We all start off in Panama City, exploring the capital on our own and enjoying a pre-cruise night at the plush Bristol Hotel. Then the Safari Voyager heads through the Panama Canal, going between locks that fill with water to bring us higher then lower between the seas. In between is Gatun Lake, which remains a protected watershed and wildlife refuge.

While engineering and history geeks may be fascinated by the canal voyage, it's best to bring a good book or a few magazines for the passage—or get a feel for it then head to bed. There's a lot of waiting time in this place where giant ships paying hundreds of thousands of dollars to pass get priority and only approved canal captains can guide most ships through the narrows. It takes awhile for the locks to fill up with millions of gallons of water to raise these ships and as long for the water to go back down to descend to the next level. 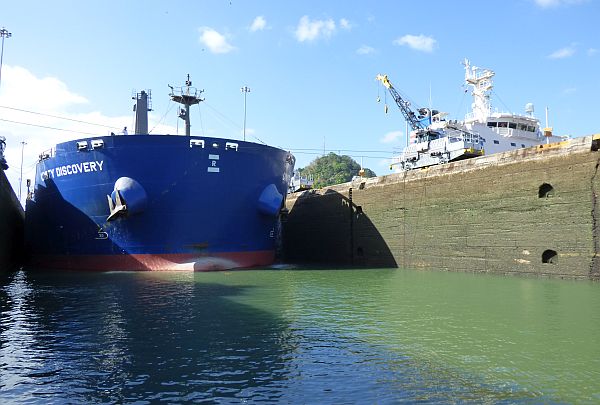 Cruising the Azuero Coast and Blue Seas of Panama

Once we exit the Pacific mouth of the canal though, we hit the blue seas and head up toward the Azuero Peninsula of Panama on our 8-day Unveiled Wonders Tour. We sleep as we cruise along, after cocktail hour and a great dinner on board, getting to know our 40-some fellow guests. When we get up for breakfast the next morning, we're looking out at a beautiful white beach on an island: Isla Iguana. 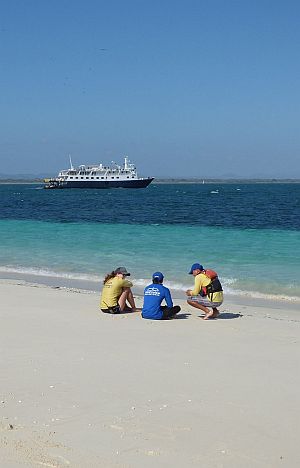 We head to shore in the inflated skiff motorboats with our snorkeling gear and towels, spending the day on the beach. We don't have this one to ourselves since it's a public holiday and locals are coming out from the mainland, but it's nowhere close to crowded. We humans are far outnumbered by the frigate birds nesting in the trees and soaring around the island, looking for fish to swipe. When we head into the water with snorkels and masks, we are also outnumbered by fish, hundreds of colorful varieties around the 37-acre coral reef. Among the trigger fish, puffer fish, and parrot fish, one cluster of snorkelers follows a sea turtle. Another sees a spotted ray glide by.

This island was used for target practice by the U.S. military in WWII and there's still a big crater in the middle of it. Iguana Island has been a wildlife refuge since 1981, however, and it's a peaceful spot now with just a ranger station on site.

We start to see what kind of miracles the chef's crew can pull off in their small kitchen on board when we come back to the boat for lunch. We have grilled shrimp skewers, Mexican chicken sopes, watermelon beet salad, and key lime tarts. Dinner is even better, then the next morning we see our first buffet breakfast: eggs benedict, bacon, fruit salad, fresh pastries, and mimosas if we please.

Our Own Beaches Along Coiba Island National Park

We explore Coiba Island, another national park with a less pleasant past: this was once a penal colony, situated an impossibly long distance from the mainland. We see the former prison from our skiff while macaws fly over crumbling concrete dock pilings. Soon we're racing out to sea though because a humpback whale is spouting water into the air. We don't get close enough for a good photo, but it rolls to its side and seems to wave to us with a fin before showing its tail and diving back down to the depths.

Later we make our way to Granito de Oro, a perfect little tropical island that looks ready made for a "stranded at sea" movie tale. When it gets in our sites though, we see that there are a few boats of visitors that have beat us to it, spoiling our private island experience expectation. The UnCruise crew always has a Plan B though. They unload the kayaks and paddleboards so we can go exploring along the pristine Coiba Island shore. We make our way across the open sea to a distant set of rocky outcrops, seeing a few oystercatcher birds and a few herons when we get there. 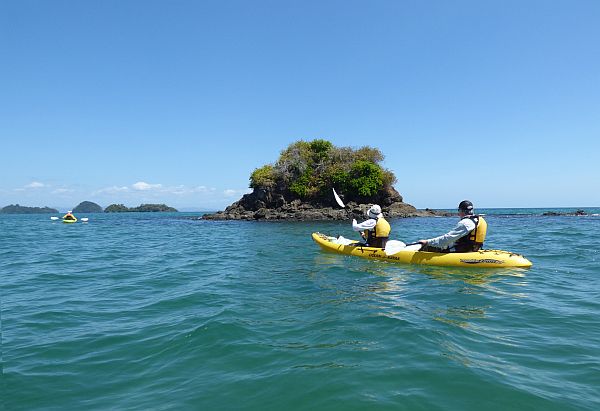 The wind is against us coming back though and my kayak doesn't seem to be moving along nearly as fast as I'm paddling. I look over to a beach on the shore and the paddleboarders have pulled up for a rest. I start daydreaming about the big lunch I will enjoy when I finally make it back to the ship and almost run into a sea turtle. It pops its head out of the water, looks at me as if to say, "Do you mind?" and dives under my kayak to move on. 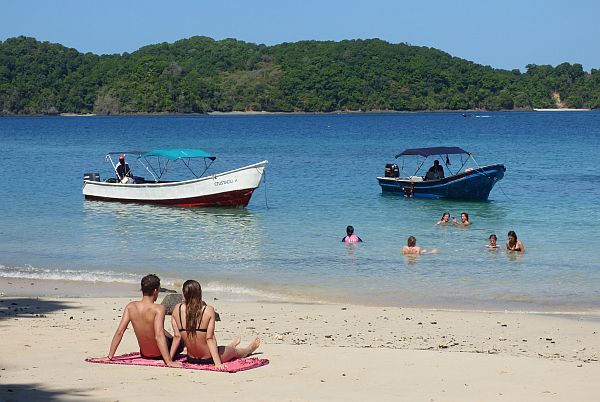 In the afternoon the other boats that were on the islet have headed back to the mainland and we have the beach to ourselves when we go ashore. It's just us and the hermit crabs as we sip rum punch or pull beers out of the cooler. I head into the water for a round of snorkeling and it's mostly a routine affair, the same fish we've seen already, when I catch something moving in my peripheral vision. I swim closer and there's a moray eel, looking menacing with its fanged mouth waving back and forth.

When we head back to the ship to get cleaned up, there are snacks waiting in the lounge and a few of us arrange an impromptu rum tasting. We go through Panama's Ron Abuelo 12-year (good), a 15-year one just called Panama Rum (not so good), and two that are great: Santa Teresa 1796 from Venezuela and Ron Zacapa 23 from Guatemala. UnCruise rates on this Panama and Costa Rica voyage are all-inclusive, so there's no need to worry about our bar tab giving us a heart attack at the end.