A modern, high style alternative to the nearby historic Hotel Monasterio, Casa Cartagena is the luxury retreat and spa that the Andean city of Cusco has never known, but with rates that are as high as the altitude. 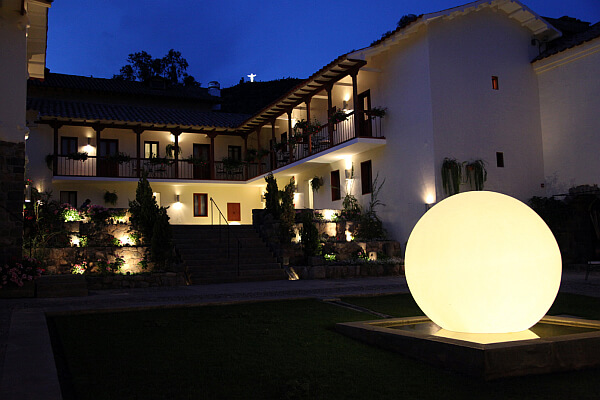 In a weird sort of way, you almost don’t want to like Casa Cartagena, a modish boutique hotel that opened in mid-2009 in a colonial mansion in Cusco. It’s a few steps from Plaza Nazarenas and two other restored colonial mansions turned hotels, Orient Express’ Hotel Monasterio and Inkaterra’s La Casona. Hearing that it is Italian owned, that there’s a full service spa, and that much of the furniture and décor was brought over from Italy you get the feeling that there’s no way this modern design hotel could fit among the historic stone palaces that this ancient Inca city is known for. Everything is not as it seems. Casa Cartagena is a beautiful place and an original idea. 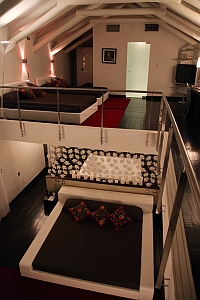 As with many Cusco hotels, the stone walls and colonial arches have been preserved and are the dominating factor of the design. Much of the property dates back to the 17th century when it was the home of the Encomendador of Cusco, Don Fernando de Cartagena y Santa Cruz (a member of Viceroy Blasco Nuñez de Vela’s court). Instantly you’re made aware that, unlike the Monasterio or La Casona that feature mostly Spanish colonial décor and gold framed oil paintings from the Cuzqueña school, the décor at Casa Cartagena is far more modern and cutting edge. There are glass walls and brightly colored Andean accents. Avant garde, Italian designed chairs and tables sit in the lobby and bar areas. Anchoring the courtyard is a large sphere that lights up at night.

The 16 suites—every room is a suite—are large, chic, and rich with top–of–the–line amenities. The eight standard suites each have 40 square meters of space, about a third of which is in the bathrooms. These feature a walk–in Tatami shower, Jacuzzi tub, and separate toilet room with a bidet. There are dark wood floors and the interior décor is clean and contemporary rather than the colonial or Andean themes that most hotels in the city use. Each room has a fun, sort of funky colored wallpaper scheme. 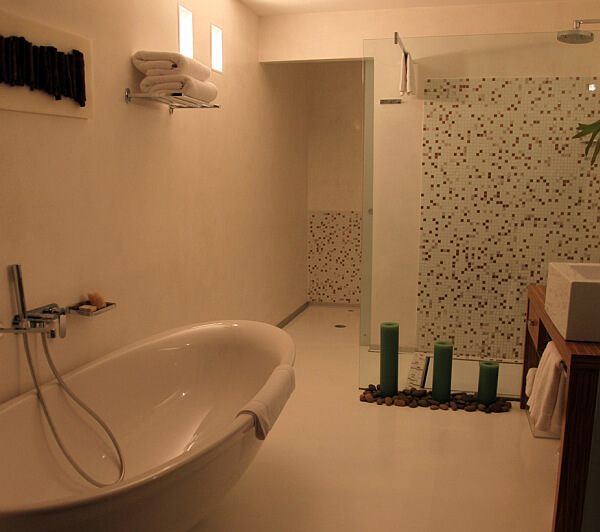 The only Peruvian touches in each room are a beautiful framed sepia toned photograph of Andean subjects from the Peruvian photographer Morfi Jiménez Mercado (which can be found throughout the hotel) and a trio of hand–sewn floral pillows on the bed. There are some big extras too: a personal laptop to use if you don’t have one, a 2–way oxygen enrichment system to combat altitude sickness, and LCD TVs. 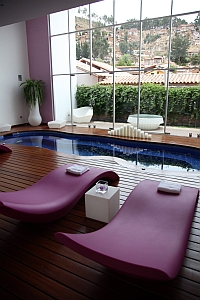 The six deluxe suites go up to 100 square meters (1,076 square feet) in size and feature a more open floor plan, though the amenities are equal to the smaller suites. The Presidential and Royal Suites are where the hotel gets particularly creative. These are the top rooms in Cusco and cater to royalty, high–powered CEOs, and celebrities.

The second level, 120 square meter (1,291 square feet) Presidential Suite looks out over the courtyard and the San Blas neighborhood. The extra space affords a separate living and dining room, as well as a terrace and a four–person Teuco hydro massage tub. The even larger two–level Royal suite looks over the courtyard and builds on the amenities of the Presidential suite by adding a large furnished terrace, dry sauna, and massage room.

Casa Cartagena’s restaurant, which takes walk–ins from non–guests, was decades before the beloved Cusco picanteria La Chola that served famous guests such as Pablo Neruda and Che Guevara. Now it’s more refined, featuring high–priced New Andean cuisine. Room service, open 24 hours, is highly precise and will bring complimentary pre–dinner cocktails and hors d'oeuvres, as well as ensuring whether you prefer your breakfast in your room or at the restaurant. A lobby bar with a fireplace and stone arches keeps rather quiet and serves quite a few Pisco–based cocktails, wine, and hors d'oeuvres.

The three–level Qoya spa is by far the most comprehensive in Cusco proper—excluding the Sacred Valley. The signature feature is their large heated hydro massage pool with large glass windows that look up onto the hillside of San Blas. There’s also a sauna and full range of massage treatments, scrubs, facials, and couple’s packages.

The major drawback of Casa Cartagena when it opened was the published prices, with the lowest–priced room starting at $200 more than similar quarters at Monasterio or La Casona. As reality set in after a few months, rates came down to a more normal level and stayed there.

Review and photos by Nicholas Gill.