Luxury in the Amazon is hardly new. And seeing the wildlife is what it's all about. But not many offerings can rival this level of comfort, this deep in the jungle—especially if you're traveling with the family. 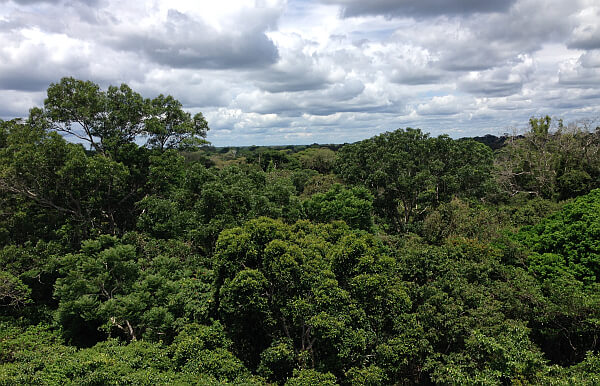 Watching wild monkeys in the heart of the rainforest, as they frolic in the canopy overhead, is a magical experience. If there is one thing that beats it, however, that would be watching your young child enraptured by the same sight.

It is our first full day at Amazon Villa, a private all–inclusive bungalow deep in the Peruvian jungle. Joaquin, my six–year–old son, and I have barely been walking 10 minutes before our guide first picks up on the rustling in the leaves a stone's throw ahead of us.

Silently, the three of us approach the source of the sound, three small brown capuchin monkeys transiting inquisitively through the foliage overhead. Jumping from branch to branch, they impatiently sniff and prod the leaves and fruit of each new tree. The trio seem to have noticed us, and even descend to just a dozen tantalizing feet over our heads, while maintaining the appearance of being oblivious to our presence. Joaquin and I are transfixed. 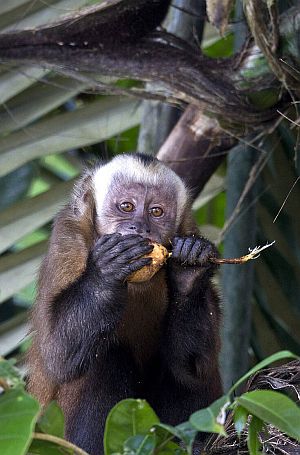 Watching these little fellas on the Discovery Channel is one thing, but seeing them live, in the muggy heat and mottled light of the world's largest tropical rainforest, is, of course, a completely different experience.

Welcome to the Jungle

It is an experience that can prove surprisingly easy and difficult at the same time. Easy because, once at Amazon Villas, all you really need do is step out the door and take a short stroll. Difficult because you first have to get here, three hours upriver from the town of Puerto Maldonado, in Peru's southeastern region of Madre de Dios. It's a three–stage journey from either Lima or Cusco, first flying into Puerto Maldonado—get a window seat, by the way, to see the spectacular, interminable blanket of green below as you drop through the clouds and prepare to land. Then taking a one–hour drive along an unpaved jungle road. Finally, the last stretch is three hours by river launch.

The trip is more than worth it, however. After disembarking, you walk for 15 minutes through pristine primary rainforest before emerging into a clearing, where a small garden of flowering jungle plants leads you to Amazon Villa. From the outside, the bungalow doesn't look like much, just a simple wooden structure with a thatched roof.

Inside, however, it is spacious and comfortable, with a living–dining room, bathroom, and bedroom. There is a king–size bed, and a surprising array of amenities including satellite WiFi, a music port, 40–inch flat screen television, and round–the–clock running water, serious rarities this deep in the Amazon far beyond the reach of an electricity grid or cellphone tower. Other than alcohol and tips, everything, including your rainforest guide and transfers, is included in the price. 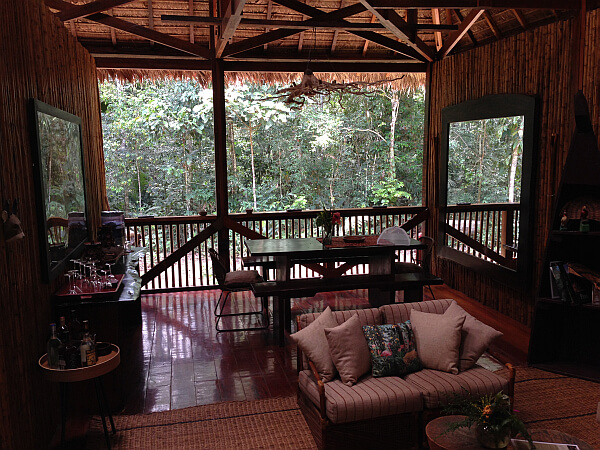 There is also a private kitchen, and a fully equipped barbecue in the garden for the Villa's chef. Given Peru's burgeoning status as Latin America's culinary capital—three of the region's top five restaurants, according to San Pellegrino's 2015 rankings, are in Lima—a Peruvian chef just for you is most definitely not something to be sniffed at, even if he lacks some of the ingredients and technology that grace the capital's top kitchens.

Oh, and by the way, thatched roofs, a native technology here in the Amazon, are just the thing in the rainforest, as anyone who has ever had the chance to compare the crashing sound of torrential tropical rain on a conventional roof to the hushed murmurings of a downpour on a thatched one can tell you.

But the Villa's most striking feature is its open design. Along one side of the building, covering both the dining area and bedroom, there is nothing but a balustrade separating you from the jungle, allowing you to simultaneously enjoy the bungalow's comforts while also getting an unrivalled sense of proximity to the rainforest.

In the bedroom, there is also a hammock beside the balustrade. During the day, the view is of a verdant wall of forest just a few yards away. At night, the living sounds of the jungle, whoops, whirrs, clicks and the occasional crash of falling branches, reach a surprisingly powerful crescendo, making an exhilarating soundtrack to your evening. 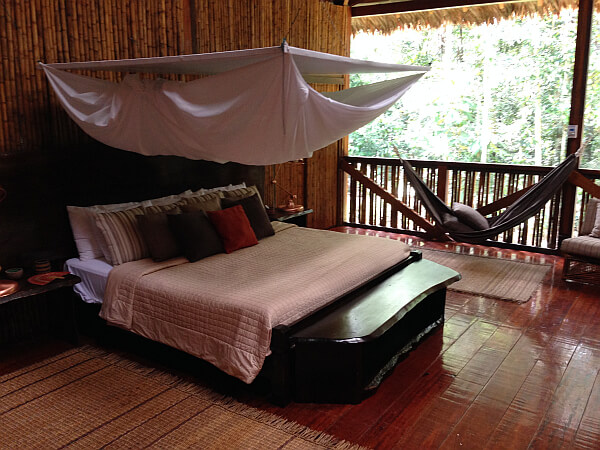 That might sound worrying, given the creepy–crawlies, and even jaguars, out there. Really the set–up is entirely safe, with snakes and felines steering well clear of inhabited areas, including even the paths near the Villa. The one real nuisance is the mosquitos, but even they don't always come out. During our three nights in Tambopata we hardly got bitten at all The beds are also kitted out with fine–mesh mosquito nets and the Villa lays on abundant supplies of a very effective natural repellent, of citronella oil, extracted from local lemon grass trees, that is actually pleasant, most unlike Deet.

The Villa is run by Rainforest Expeditions, one of the Amazon's foremost eco–tourism companies. Launched nearly three decades ago, it now operates three lodges in the Tambopata area, including the Refugio Amazonas, a 32–bedroom lodge on a private 500–acre reserve in the buffer zone of Tambopata National Reserve.

Amazon Villa is situated on that private reserve, at a discrete distance, meaning that guests can drop by the Refugio any time they want to enjoy its amenities, including two massage rooms overlooking the forest. Or, of course, they can keep their distance and enjoy this amazing location in utter privacy. The Villa is set up to receive families, with small beds for kids. Yet it may not come as a surprise that most guests are couples in search of the ultimate romantic experience.