Grand Ruins and Mysterious Tombs in the Amazonas of Peru


It takes some effort to reach the Amazonas region in the north of Peru, but the journey comes with a big payoff in the form of a spectacular fortress complex and mysterious tombs built into cliffs. 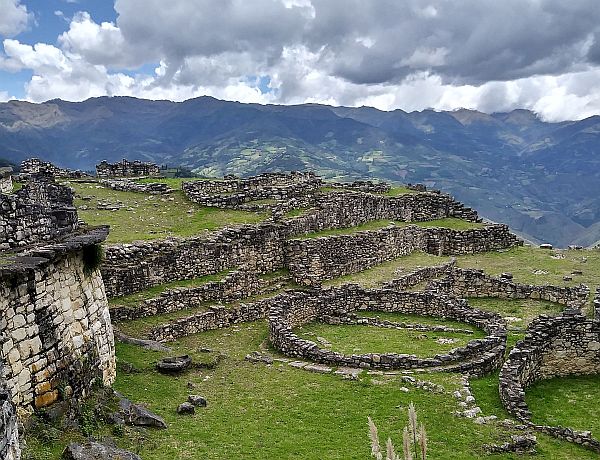 As we passed the stone walls of the giant Kuelap fortress, built on the summit of a steep mountain, it was clear an invasion would have been next to impossible. The walls rose up 10-15 times the height of a person and the entrances were equally daunting: a few men could have broached one of them with four or five abreast, but then the entrances narrowed so that no more than one horse or two people could pass to the interior. Anyone trying to invade would have been very easy to pick off. In the end it took an internal class struggle to finish it off from within.

How has this grand fortress of Kuelap stayed so far off the tourists' radar while the sites around Cusco and the Sacred Valley are thronged? Well the Incas conquered and assimilated everyone eventually, including the Chachapoyas people of this region. Plus this isolated set of ruins is in a mountainous area in the far north Amazonas region of Peru, with no easy access from a big city.

The Amazon Basin is a massive area spanning multiple countries in South America. Up in the north where the mighty river begins, it is fed by more than a dozen tributaries, some of those being major rivers themselves. In the case of Peru's Amazonas region, it's the Marañón and Ucayali rivers, which join and then feed into the Amazon River itself.

This part of Peru is half mountains, half valleys, a mix of dramatic cliffs and level agricultural areas. There's some evidence from archaeological digs that this was the original home of the cacao bean, which spread by trade to other countries to the north, including Mexico, where the Spanish invaders first discovered it. This is also one of Peru's top coffee growing areas. 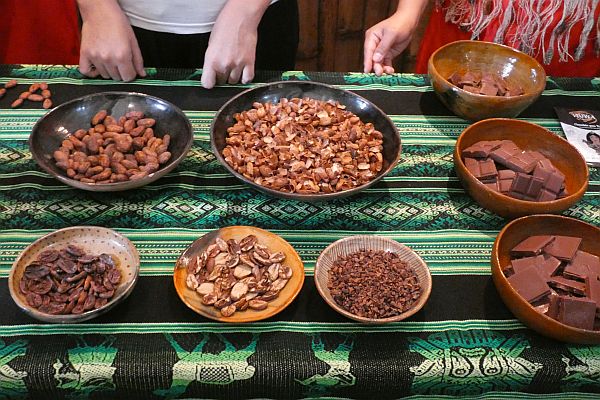 We got to sample plenty of both after landing in our gateway city of Jaen, in a new airport where the runway isn't in sight of the terminal and the terminal is made out of bamboo. This is a land of cooperatives, with farmers uniting under organized collectives that sort the cacao or coffee beans by quality and negotiate volume deals up the supply chain.

We sample the group's output at Coffee Apu, trying a variety of different preparations. This cooperative, founded in 1999, has around 2,000 members and its own cafes. Later when we return to the city to fly home, we taste a variety of chocolates—some made with jungle fruits and berries—at Nuwa Chocolates. There are 60 partners in their cooperative, with farmers supplying the beans and then the organization putting them through steps from big fruit pods to chocolate bars. First the beans must ferment three or four days at low heat, then ferment a another six to seven days at higher heat. Then workers dry the cacao beans, shell them, and grind them into a paste while adding with sugar and other ingredients for flavoring.

To the Chachapoyas Region

The main reason people visit the Amazonas area of Peru—the few of them who are in the know so far—is to see what remains from the Chachapoyas culture and related tribes that once ruled this area. They left behind the Kuelap fortress complex, as well as tombs in the sides of cliffs that were fronted by figurines meant to symbolize the dead who were buried. This is also the home of long-hidden Gocta Falls, one of the highest waterfalls in the world.

The Chachapoyas people date back further than the Incas who eventually consolidated power in the region for a brief spell of less than a century, prior to the arrival of the conquistadors. These "warriors of the clouds" were the most resistant to the rule of the Incas and staged several rebellions, actually joining the Spanish to fight against the Incas and aiding in their downfall. 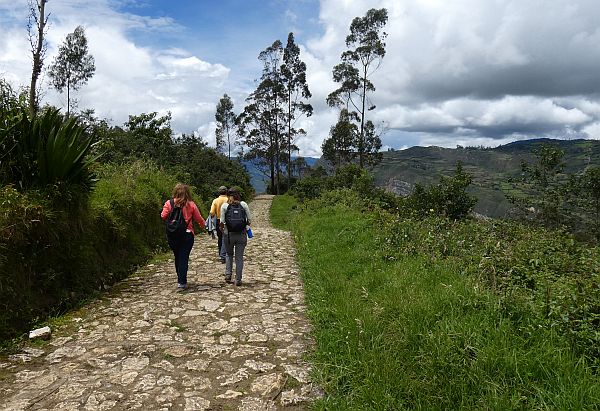 They lived a rather isolated life before that in this land of rivers and canyons and didn't keep written records. Much of what we know about them is from the ruins left behind and what has been discovered in their burial tombs.

We get our first glimpse of these tombs at the end of a spectacular hike in the mountains at Revash. We arrived in the village of San Bartolo after driving through some spectacular mountain scenery where it seemed like the visibility was 100 miles. After walking along the road that serves as the beginning of the trail for a while, we passed a modest house where the owner invited us in to look around. Although the floors were just packed mud and the outhouse was up a steep bank, they seemed well-off with a big group of guinea pigs in their own room with a pen, a TV, stereo, and modest store selling rice and cooking oil. She told us to stop by again on the way back and she'd be making eggs and potatoes. We did and both were heavenly. 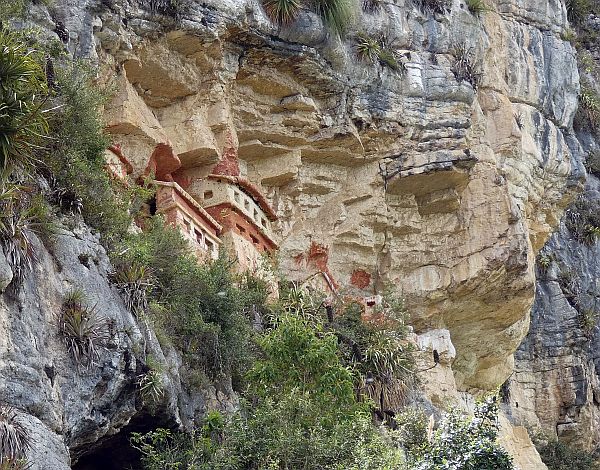 The last part of the trail is dug out from the side of a cliff, with wood railings in some places to help hikers keep their footing. The payoff is two sets of tombs on the cliffsides, like small houses that contained the bodies of the dead inside.

More mausoleums are on display at another site called Karajia. You can see some from the road with binoculars, or take a hiking trail past an entrance gate to get a closer look. The sarcophagi are taller than a real person would have been then—more than two meters high—and were made out of bamboo and clay then painted. Each one represented a prominent Chachapoya ruler or priest and corresponded to one mummy that was usually inside. It's still a mystery how they built these tombs and installed the sarcophagi since some of them are 50 meters up a sheer cliff face. 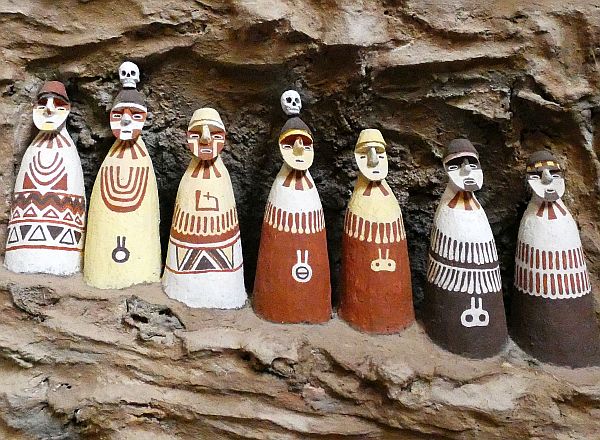 To gain more insight into the Chachapoya people, the neighboring tribes, and the Inca reign, we headed to the Leymabamba Museum in the town of the same name. This well-designed museum sits in a large garden of tended tropical plants, dramatic mountains looming above it. Inside, we see a scale representation of the kinds of tombs we've been viewing from afar, with the figurines in front. It's all a bit abstract until the lights go on in a glassed-off room that was previously dark. Through the glass we can see actual mummies taken from the tombs and preserved. Some are grown adults, some appear to be children. Some are wrapped in stitched fabric and have a crude face drawn on the front, which another still has its eyes open and hands with fingers extended partially covering its face.

It's a stunning sight and I find it difficult to imagine how they survived so long intact in this humid climate. "Nobody really knows what compounds they used to preserve the bodies," Roger explains," but the legend says it was some kind of liquid only found in the jungle. 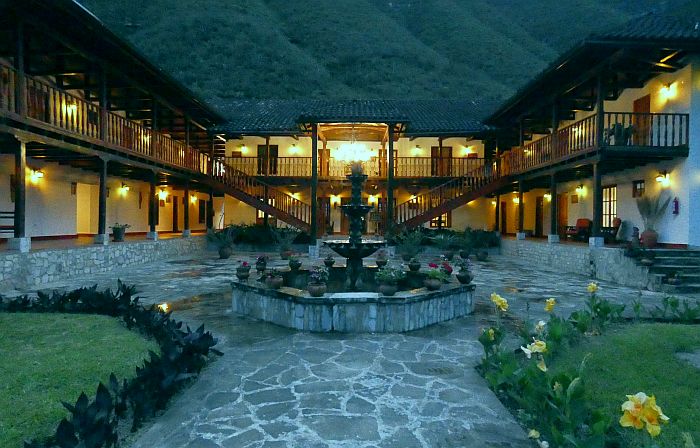 These tombs are dotted around all over the valleys here, especially beside the Marañón River. When we checked into our Achamaqui Casa Hacienda Hotel beside the river, staffers handed us keys that looked like little versions of the tomb figurines. "There is a sarcophagus on the property," she said. "Go over the bridge and follow the path." For those willing to rough it to feel like an explorer, our guide Roger leads a camping tour that visits mausoleum sites around the Lake of the Condors. It's also known as Laguna de los Momias because of the concentration of burial sites. Most of the mummies in the Leymabamba Museum are from these tombs, but more are still unexcavated until additional funding materializes.