The Mighty Fortress of Kuelap

At one point, around 5,000 Chachapoyas people lived in and around Keulap, an imposing fortress that is much older the Machu Picchu or Ollantaytambo. The government is surely hoping to make it live up to its nickname of the "Machu Picchu of the North" with a new and expensive modern gondola cable car system built to take visitors up to the site from a parking area. Previously, the site got very few visitors because people had to be in good shape and committed: the shortest route required a hike of an hour and a half from the closest village with a road. Now it takes 25 minutes by cable car. With this fast track to the top, the former 45,000 annual visitors are projected to rise to 120,000 in the first full year of operation. 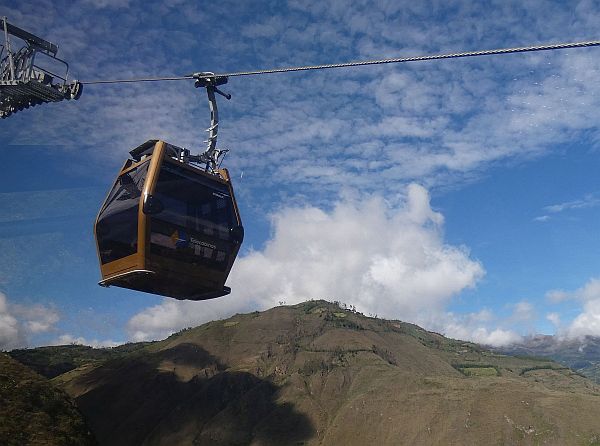 That ambitious target is still only 10,000 a month though if you do the math, or about what Machu Picchu receives in just three days. If our visit was any indication, you've got a good chance of getting plenty of photos with no crowds in them if you visit soon. While this is a spectacular site that deserves to be world famous, the long journey on two-lane roads to get here from any airport and the lack of hotel infrastructure will limit the number of quick-trip tourists who will make the effort. This site was, after all, chosen to be hard to reach and impossible to conquer, a position that served it well for nearly 1,000 years, until the 1500s, when the Incas, the Spanish, and a class revolution civil war brought down the remains of the empire together. 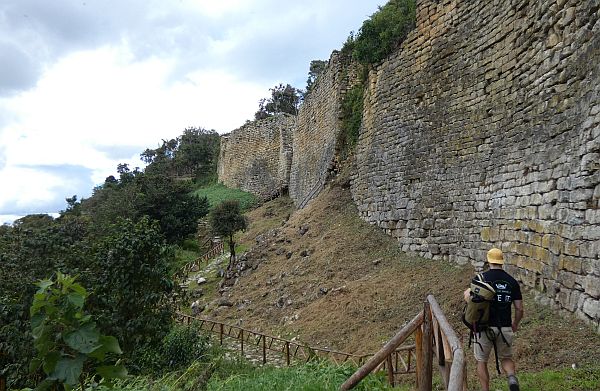 Our efforts to travel here are rewarded with one spectacular vista after another as we follow the stone path to the entrance and learn about the multiple functions of this complex from Roger and his cousin Samuel, a guide and historian. Part fort, part residential settlement, and part burial ground, Kuelap housed the rulers and everyone who worked the nearby fields until the population got too large. It then expanded here and there before eventually forcing the lowest castes to take their chances outside the walls.

The highest parts with the best views were occupied by the elites and the sacred buildings, many of them still at least partially intact. It was especially insightful to hear stories from our guide Roger because of where he grew up: his family house was just down the hill from Kuelap fortress and his parents farmed the 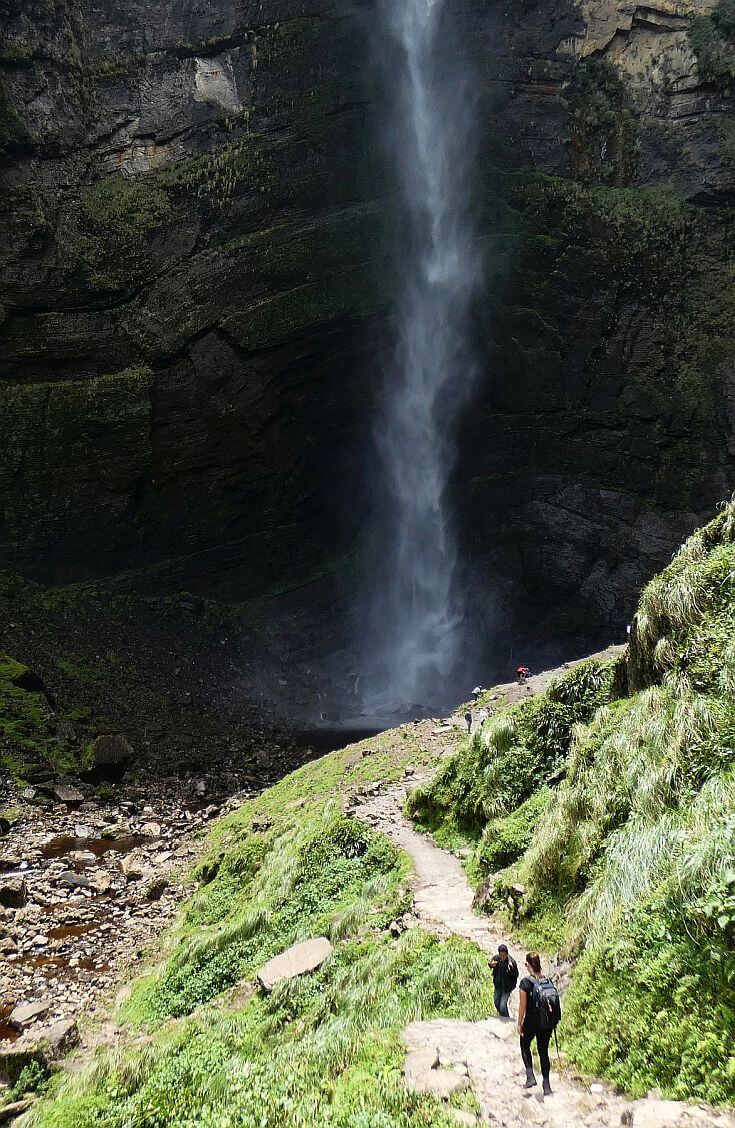 land there, growing potatoes. He could see the Keulap walls from the fields where he played.

Just as we appreciated Revash more after the hike to get there, Gocta Falls makes you put in some effort to get the reward. You can see the falls from the village far away before even setting off though: two sections spill down from a high cliff, dropping approximately 771 meters (2,531 feet) in all and ending in a thunderous roar into a cold pool that some in my group dove into. Those who can't make the walk of 6km each way can hire a horse from a local guide instead.

Although the locals knew about these waterfalls for ages, nobody ever actually approached them up close until a foreigner mounted an expedition up the river in 2002—the jungle on each side was too thick to get through. Eventually several non-profits jointly opened up a trail in 2007 and the locals' fears of lake monsters and unholy spirits that supposedly lived at the base of Gocta Falls proved unfounded.

The falls themselves are impressive and the mist flying off the falling water feels welcome after the hike there. After returning to town, we had lunch with a view at Gocta Andes Lodge, which has a panoramic vista of the dramatic mountains surrounding this area. 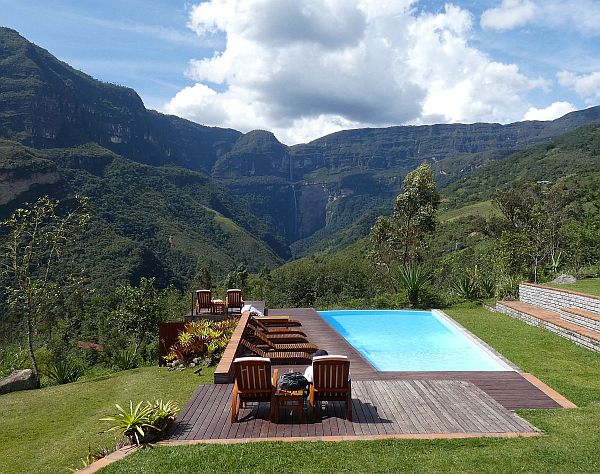 Fine Food and the Artist's Touch in the Amazonas

As is true in most of Peru, meal times in the Amazonas region are a real treat. We ate quite well at the top hotels like Achamachi, La Ensenada, and at the Gocta Lodge, but also at the humbler roadside and small-town restaurants we visited during our excursions. There's an abundance of ingredients in this area, including passion fruit, plantains, various potatoes, and large beans. The chefs make the most of the bounty.

We ate well but also healthy, getting a much greater variety of vegetables then I would have imagined. I did love the meat dish we tried twice that was with rice and olives steamed in a leaf wrapping similar to banana leaves. We also had a great dinner in one of Chachapoya town's most famous restaurants: Batan Tayta. I wasn't adventurous enough to eat the preserved ants gracing one of the cocktails, however.

We also got some insight into local culture from pottery maker Clotilde, in her workshop outside of Chachapoyas town. I can't sit cross-legged on the floor for more than 15 minutes at a Japanese restaurant, but she sits that way on a dirt floor all day making pots by hand that look like they came off a potter's wheel. This despite the fact she's had eight decades on this earth.

"I don't make them during a full moon though," she tells us. "The clay is no good then." She also takes a break during the rainy season. It takes a serious fire of cow dung, straw, and wood to get a hot enough fire for the kiln. When it's too wet outside, the wood won't burn hot enough, she explains.

Making pottery by hand is difficult and there's always the threat of it becoming a dying art. She learned the methods from her grandmother and is passing her knowledge on to the next two generations. She worries that the youngsters aren't interested enough and the quality will suffer, but she's more optimistic than she was a decade ago because a larger trickle of travelers is opening up and "they appreciate the things we make by hand." She's no slouch when it comes to volume—she finished four pots in the half hour we watched her—and later we see some of her pieces for sale at our hotel.

I was delighted and surprised by much of what I experienced in the Amazonas region, an area of Peru I knew almost nothing about before this adventure tour. In any other country these attractions would be the main draw, but here they're overshadowed be the abundant history of Peru's civilizations to the south. Come visit them yourself and feel like a real explorer instead of that one millionth person posing in front of the same famous backdrop.

There are no true luxury hotels in this region of North Peru, but there are a few well-run ones that are quite comfortable. The best base is Achamaqui Casa Hacienda Hotel on the river with panoramic views, nice grounds, and a pool. La Ensenada Hotel Chachapoyas is on the outskirts of Chachapoyas town itself and has a great restaurant. Near Gocta Falls, the Gocta Andes Lodge offers spectacular mountain and distant waterfall views, including from the pool, and is worth a stop for lunch or dinner after the falls hike even if not staying.

I was on a tour arranged by a major operator in the region: Viajes Pacifico. They can make all the arrangements for flights, lodging, comfortable transportation, and site tours. See their Chachapoyas tours here. We flew into Jaen Airport, less than two hours from Lima on Viva Air or LATAM, then four hours by road to Chachapoyas town. The other flight alternatives are to Tarapoto to the east or Cajamarca to the west, but those are six to seven hours away. For whitewater rafting trips in the region from May through October, get in touch with Apumayo Expediciones.

For more information on the region, see the Peru Tourism website here.