Touring the Ballestas Islands and the Nazca Lines of Peru

Based at the southern Peru port of Paracas, you can explore the teeming wildlife around the nearby Ballestas Islands and see images of animals carved into the desert floor: the mysterious Nazca Lines. 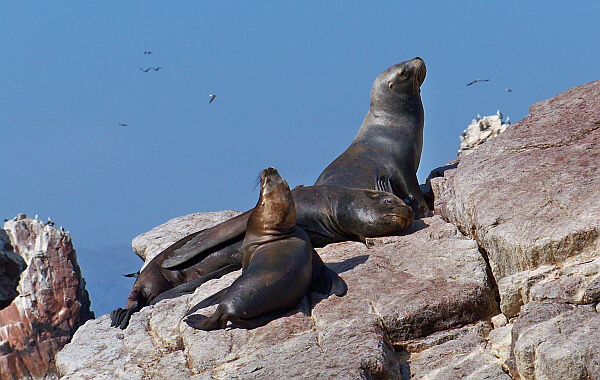 The orange rocks are covered with guano, some looking like orange sherbet with icing on the top—but icing covered with ants. The rocks are teeming with life, so many birds settling on them at one time that the outcroppings look alive themselves. At the bottom are more shapes moving around, these much larger. Sea lions in groups of five to fifty are occupying every flat space and some that are not so flat, sharing space with waddling penguins. 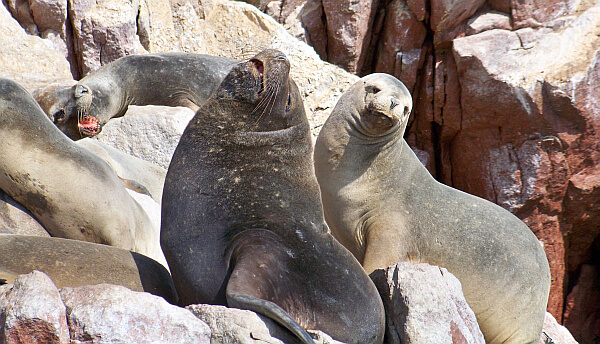 The Ballestas Islands are nicknamed “the poor man’s Galapagos” because they present a lite version of what you can see in those fabled islands, with a tour of a few hours instead of a week or more. The prevailing animal form has wings: you’re sure to see Peruvian boobies, oystercatchers, comorants, pelicans, gulls, and Humbolt penguins—the world’s most northernmost penguins. When the sea birds take to the air, it can be hundreds at a time, so a sun hat comes in doubly handy.

All the bird life, combined with the fact there is very little rain here, means that a lot of guano stays on the rocky islands. A few times a year, much of the smelly stuff is loaded into boats and hauled off to nearby farms, fertilizing the asparagus fields in the desert. 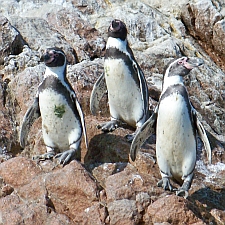 The penguins get a lot of oohs and aahs from our boat, but the cameras really start clicking when the biggest creatures come into view. Huddles of huge sea lions cluster on small islets poking out of the blue water, fighting over available space to get closer to the big male. Life is good if you’re a sea lion alpha male: the largest ones have whole harem around them on a beach, looking like Genghis Khans with fins, surrounded by concubines. 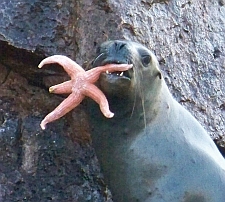 As in the Galapagos, the big creatures, at the top of the local food chain, seem unfazed by us and the boat, ignoring us as we glide close by. At one point I get to see something I never saw in the Galapagos: a glistening sea lion holding a starfish in its mouth. It looked at us suspiciously as it climbed to higher ground, not wanting to share its bounty with anyone.

The scenery here would be a draw on its own, with erosion forming arches that extend over the clear blue sea and rocks rising up like fingers from the water. Where the birds don’t rest, the surface is a glowing orange.

On the way, we pass a taste of what’s to come further south in Nazca: a design in a hillside called “The Candelabra.” It’s nearly 600 feet high and can be seen from a dozen miles away by boats. It’s deeper and different from the Nazca Lines drawings though and although it was discovered by Spanish explorers, no one really knows how long it was there before that. 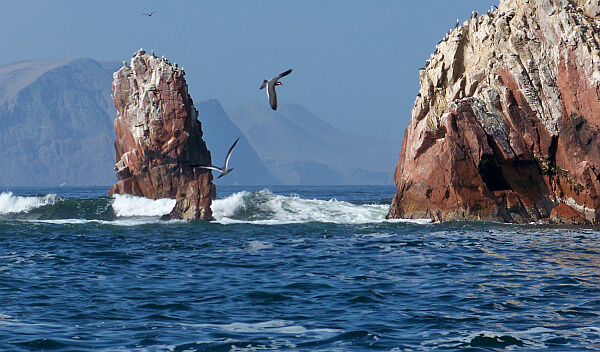 Branching Out from Hotel Paracas

Paracas, Peru won’t win any beauty awards and even the most gifted magazine photographer would be hurting for things to focus on after leaving the hotel. The sea water looks like algae and the view out to sea is of big industrial ships anchored offshore, past a fleet of commercial fishing boats. A sign on the beach by the hotel says “Swim at your own risk. Stingray zone.” Making it worse, a red tide sweeps through while I am there, leaving a the gray beach covered with a carpet of dead crabs.

Lying three hours south of Lima, along a road hugging the Pacific coast, Paracas was historically a gritty port town, but it lured in domestic tourists visiting to see the Ballestas Islands and explore a nearby nature reserve. It was never much to look at, but then an earthquake centered in nearby Pisco a few years back made things worse. There’s a rebuilt seaside promenade though that’s a pleasant place to watch the sunset at dinner. Some laze away the afternoons here, spending the afternoon drinking pisco or local beer.