Cruising the Amazon River in style has gotten plush with the high-end experience of the Aria ship from Aqua Expeditions. Glide along with us in luxury through the jungles of Peru. 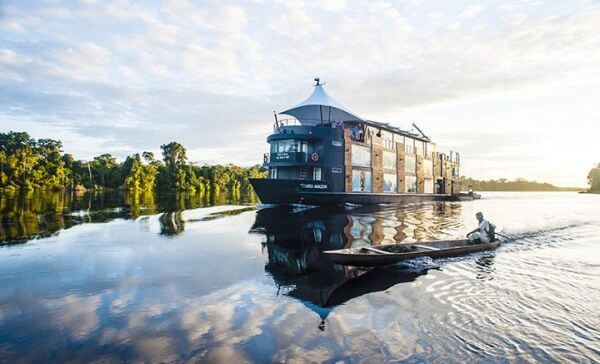 Few destinations make me swoon quite like Peru. I first visited this country in 2008 on an Amazon cruise with International Expeditions. The eight days I spent meandering the majestic river in unplugged idyll opened my eyes to the country’s spectacular scenery, wildlife, people and culture. Although the trip wasn’t luxurious, it sated the nature and science geek in me, and completely spellbound, I’ve returned to Peru every year since, most recently to cruise the Amazon with Aqua Expeditions’ newest ship, M/V Aria.

Those thinking about a luxury Latin American river cruise are probably already familiar with Aqua Expeditions. After launching with an earlier sister ship no longer in service, M/V Aria offers travelers an intimate, low-key luxurious Amazon experience with 16 spacious and modernly appointed suites (eight on each level). Built in 2010, the vessel boasts a similar layout to the earlier Aqua and all its luxe amenities. But, Aqua Expeditions made some improvements and for Aria’s seven-night Amazon Expedition Cruise, the ship embarks on a brand new route. 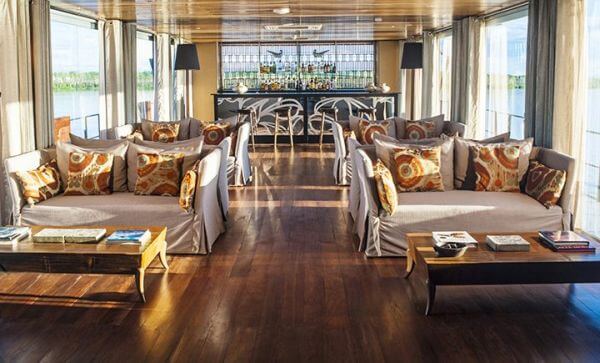 Aria takes Aqua’s panoramic floor-to-ceiling windows, one of the absolute best features about the ship, and made them larger. One of my favorite moments of Zen on the Amazon (and there were many), was waking up and looking out at the sun rising and the river going by from the comfort of a super snuggly bed. I’m a sucker for high thread count linens and a mattress that means business. The only thing missing was my boyfriend. This early morning scenario sure beats facing an inbox filled with email, the phone ringing, and dogs begging to go out. All suites aboard Aria feature river-facing views and floor plans are identical on upper and lower decks.

Another improvement on Aria is its partially covered sundeck and Jacuzzi. They’ve created a swanky sundeck complete with loungers, towels, cold water service, and Pisco Sours on demand. Think of a more intimate version of the poolside setup at your favorite five star hotel placed on the bow of a small ship. In the middle of the Amazon jungle. If you’re about leisure, relaxing and Vitamin D, it’s a lovely touch. The Jacuzzi seats six or so people comfortably, and although I enjoyed it in the company of newly made friends, I feel it is better suited for cozying up with your sweetie and a nightcap after a long day of exploring. (I probably shouldn’t be promoting drinking and hot-tubbing, but I do it all the time at home.) 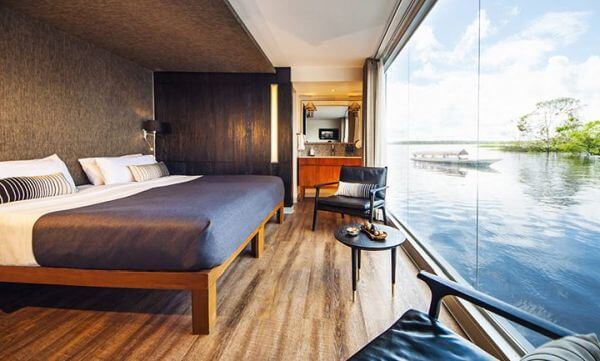 For those who get restless—or feel the need to burn off calories from Executive Chef Pedro Miguel Schiaffino’s nightly tasting menus—Aria offers two small exercise rooms. Situated on either side of the ship at the rear of the lounge, these rooms are basically big enough for one person to work out on a treadmill or exercise bike. I’m about as gym-phobic as they come, but there’s something soothing about sweating while floating on a boat and watching the scenery go by. This is my idea of multi-tasking. Besides, working out on the Amazon is far more calming than watching the ticker tape on CNN or having to endure Pitbull blaring from gym speakers. Trust me.

Peruvian cuisine is a big draw for many travelers and Chef Schiaffino made my eyes roll back in my head on a nightly basis with his tasting menus. (His restaurant, Malabar, is the one of the best in all of Lima.) Aria is about to roll out cooking classes for its guests, so that they can learn about locally sourced ingredients and Peruvian preparations. It’s not an easy feat to source ingredients in such a remote region of the world, keep food fresh, and prepare creative and complex meals three times daily, even for a ship that can carries 32 guests at most. Foodie or not, there’s a lot to be learned in such a cooking class.