If you’re an active traveler, Aria has increased its options for off-boat adventures with canoeing with local communities in traditional dugout canoes, power walks during the low season (when shores are accessible by foot), and swimming in the Amazon. All new activities will be guided by Aria’s naturalist guides.

Here is the itinerary on the new Aria route, which includes some of the largest tributaries of the Amazon: the Maranon River, Choroyacu River, Tacsha River, Pacaya Samiria and San Martin de Tipsicha. Plus the mighty Amazon itself, of course. 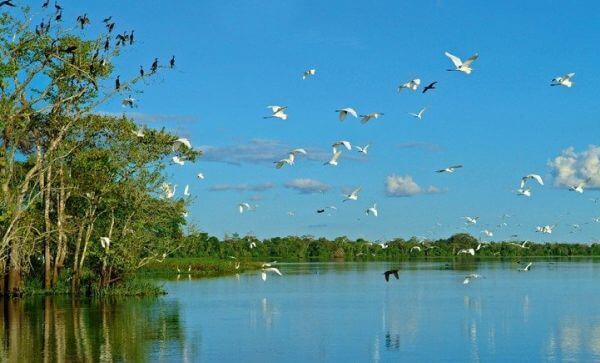 My itinerary started in Seattle, with a layover in Los Angeles. From Los Angeles, I flew LAN Peru Business Class to Lima, Peru, then onto Iquitos International Airport. In Iquitos (a remote city, accessible only by river or air), guests of Aria convened at the airport before being whisked in an air-conditioned van to Nauta’s main wharf to board M/V Aria under a blanket of darkness and starry skies.

Before dinner, we performed a routine safety drill and briefing on the upper deck. Then it was into the air-conditioned lounge, where we learned about life onboard, and had the first of the nightly briefings about our adventure to follow. We met the naturalist guides and the cruise director, who used video, photos, and maps to explain the details of our journey into the Amazon.

Next, it was time to sit down, relax, sample some fine South American wine, and enjoy the truly world-class cuisine. Schiaffino’s recipes, with the imaginative use of local products—fruit, fish, spices—made every meal a delightful adventure. (The menu offers many choices, including a vegetarian option.) Cheers to the beginning of a beautiful journey. 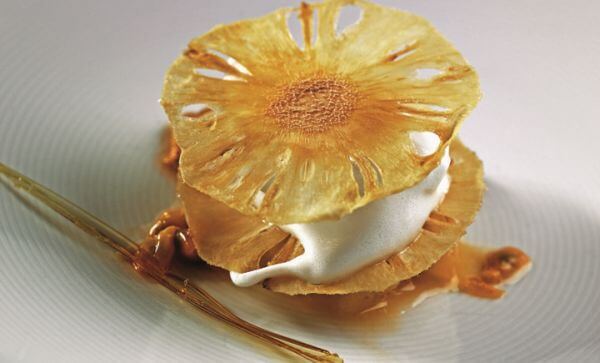 This morning, we boarded skiffs to explore part of the vast Amazon flooded forest. Our guides told us about the rainforest and its dynamic life, as we explored what scientists call a “gallery forest,” because of its narrow vegetation, creating a tunnel of leaves. As we floated through this tunnel, it was easy to spot parrots, macaws, and fluffy monk saki monkeys, very close to the skiff.

Later in the day, we headed out on another excursion. On this walk, our guides introduced us to native people doing subsistence farming, and told us how they learned to cultivate wild plants and trees to earn farm income. As our adventure took us deep into the primary forest, our guides also showed us the wealth of fruit trees and medicinal plants hidden in the jungle, talking about some of the plants’ secrets.

Early, we boarded skiffs to go deep into the Pacaya Samiria National Reserve, along the Samiria River. Along the route, we had the opportunity to see various species of monkey, such as howler monkeys, squirrel monkeys, saddleback tamarin monkeys and many bird species such as blue, yellow and scarlet macaws, as well as toucans and some species of river hawks. We arrived at the PV2 Tacsha watchpost, where we followed a path into the rainforest and enjoyed a picnic lunch, before we began our journey back to our vessel. 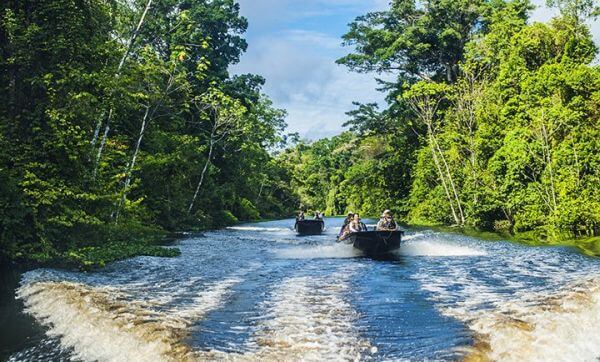 Later in the afternoon, we got back into the skiffs for another excursion. This time, we kept our eyes directed toward the jungle canopy, where we were able to spot several kinds of primates—some of the 13 species of monkeys resident in the National Reserve. We kept our eyes peeled for alligators and binoculars at the ready for the more than 200 species of birds. As the sun set and our searchlight came on, we searched the coastline for caimans, tree boas, tarantulas, and frogs.