Text and photos by Buzzy Gordon

The Andean Explorer, PeruRail's luxury train service between Cusco and Puno, is one of the truly great surface transportation trips in South America. The winner of several international awards, this sister service to the Sacred Valley's Vistadome and Hiram Bingham is certainly the best choice for traveling to or from Lake Titicaca in the south of Peru. 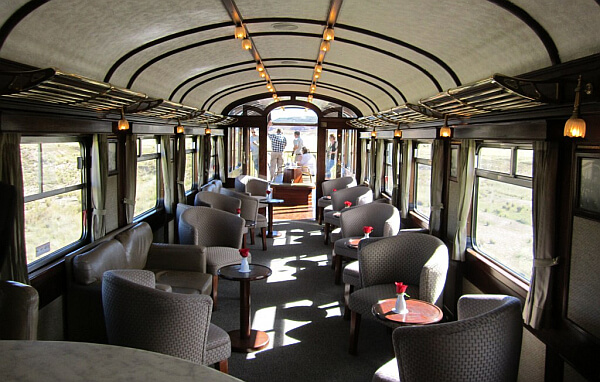 Nearly all tourists visiting Peru journey to Cusco (or "Cuzco") en route to the country's best–known monument, now officially tagged as one of the wonders of the world. The colonial capital of the territory that was previously the seat of the Incan empire is the gateway to the Sacred Valley in between, but also to the Andean plateau and Lake Titicaca, the highest navigable body of water in the world. 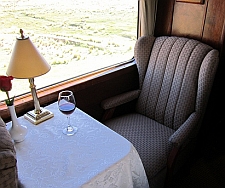 The overland journey is not short; but after adding the hassles of two airports — and the necessity of transferring from Juliaca to Puno after one lands — to the air option, the net time savings represented by taking the much shorter flight diminishes considerably. Then factor in the sightseeing component — usually non–existent in a tube flying above the clouds — and the train trip wins hands down.

The main reason the hours in transit go by so quickly is the excellent onboard entertainment: two different bands and dance troupes, featuring music and folklore from both Cuzco and the rural Andean plateau, perform in the morning and afternoon. The dancers, clad in resplendent native costume, get the passengers up and moving to the beat of the infectious music

A leisurely lunch, featuring regional specialties, is served to you in the elegantly set dining car. Main dishes like trout freshly caught in nearby mountain streams, accompanied by locally grown quinoa, are a tasty introduction to Andean cuisine. Lunch is included in the train fare, of course, as is afternoon tea; it is recommended to take advantage of the unlimited cups of coca tea, said to help combat the effects of the plateau's dizzyingly high altitude. 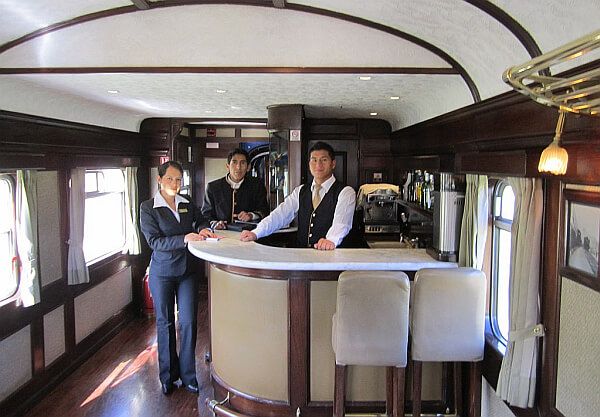 Following lunch, the talented bartender in the club car gives lessons in mixing Peru's classic cocktail, the pisco sour. A fashion show provides passengers with the opportunity to view — and feel — the special woven alpaca and vicuna fabrics unique to the Peruvian Andes.

Not long after travelers have recuperated over tea from dancing with the engaging entertainers, the scenic highlight of the journey begins to unfold: watching the sunset over Lake Titicaca, framed by the imposing peaks of the Bolivian Andes. (With any luck, graceful waterfowl will also make an appearance.) The view is best enjoyed and photographed from the open–air rear car.