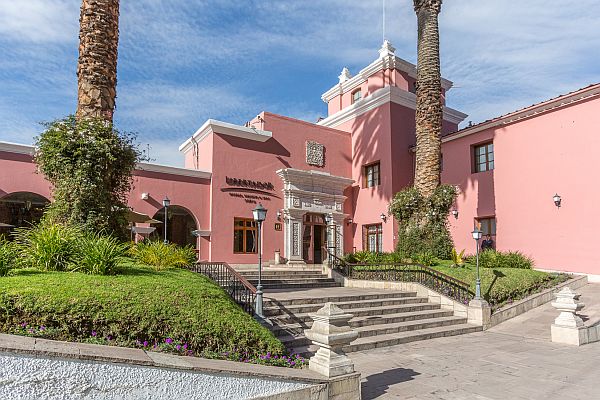 Arequipa, dubbed the "white city" because many of the original buildings were made of white stone, is the second largest city in Peru and a UNESCO World Heritage Site. Ringed by volcanoes and close to the Colca Canyon, it has a lovely plaza, rich Colonial history, and a fantastic museum where the country's most famous mummies reside. It's also a city of literature (Peruvian writer and politician Mario Vargas Llosa was born in Arequipa) and food (beloved Peruvian dishes like rocoto relleno were created here).

Despite all that, it's easier to find a local craft beer in Arequipa than a hotel with more than three stars. However, stroll about 15 minutes from the center of Arequipa to the leafy and peaceful Selva Alegre neighborhood and you'll find what you're looking for at this former Libertador, now Wyndham standby. 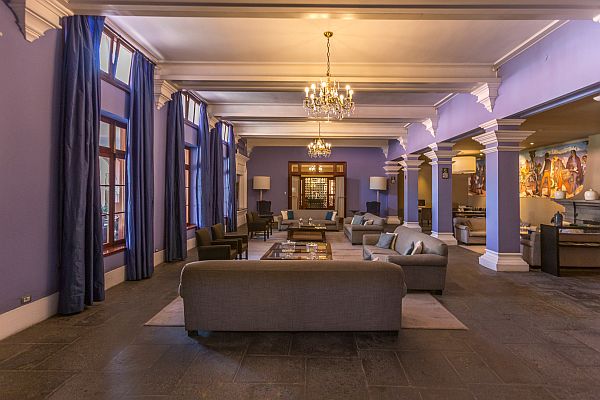 Built as the mansion for a wealthy family, the property was turned into a hotel by a Swiss company in the 1940s. It now boasts a small but serviceable gym with free weights and a wide range of machines, a spa with a sauna and steam room (all free for guest use), a working fireplace in the lobby that's fired up in cold winter months, and nearly 90 rooms in nine different categories. 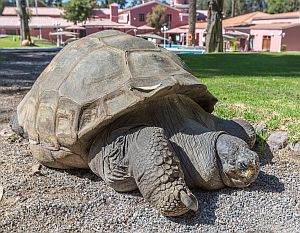 The most recent renovation of the hotel occurred in 2013 when two million dollars were spent to refresh all areas and introduce the latest technology. For example, there is no dedicated business center but both MACs and PCs are provided for guest use in a desk-like area off the lobby.

Moments of elegance—including rich colors, diffused light, a massive fresh flower arrangement in the lobby, and carved wood and leather furniture in rooms—give the hotel a regal hacienda feel within minutes of the city center. Black and white photos of the area's natural and architectural beauty, shot by a local photographer, add an artistic local touch to hallways and rooms.

All rooms are carpeted and all include iDocks and mini-fridges. The three suites are worth the splurge for the extra space. The Arequipa suite is the only room in the hotel with a private Jacuzzi. 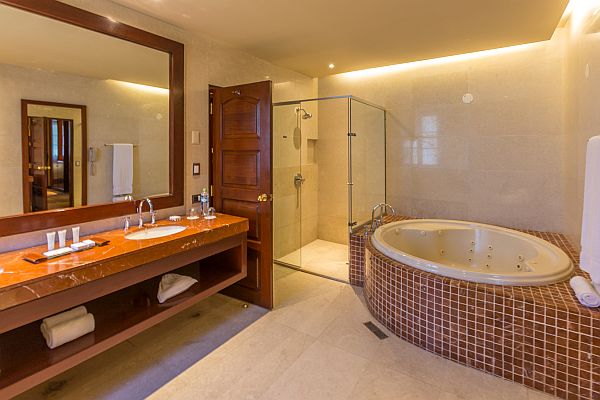 The hotel restaurant is called Los Robles in homage to the rare oak beams in the ceiling (robles means oaks in Spanish). The chef here is known in Arequipa for his commitment to traditional regional food and he and his staff make good use of a small onsite kitchen garden. During our stay this was still a Libertador hotel and featured the kind of expansive breakfast buffet that chain is known for, though the soundtrack of musak versions of country and western songs which was played each morning was puzzling. We're hoping new management has kept the spread but changed the soundtrack.

There is one element of the hotel that has remained unchanged for decades. In 1947 the Ecuadorian government brought a Galapagos tortoise as a gift to then Peruvian President José Luis Bustamante y Rivero who decided the tortoise, which was dubbed Juanita, should live at the best hotel in his hometown, Arequipa. When the Libertador bought the property, Juanita came with it and the giant tortoise still lumbers around the five acre hotel grounds. On weekends children have the chance to feed Juanita along with an alpaca named Marcelino.

Other family-friendly elements at this Wyndham Costa del Sol include a large playground area on the hotel grounds, a pool with ample shallow areas (and volcano views) and, in 2018, a new children's activities program called Juanita's Kids Club. 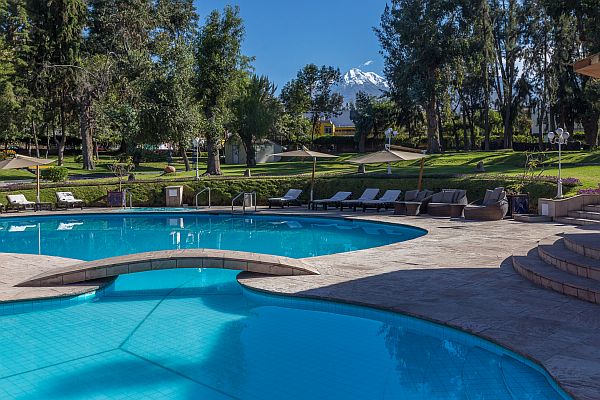 Oh, and that distinctive pink color on the outside of the hotel? Despite the city's standing as Peru's "white city," in Colonial times Arequipa's houses were painted in bright colors. The hotel honors that tradition with its pink facade.

Despite Arequipa's steadily growing popularity, the city is still short on luxury hotels. While this one has taken a brand downgrade going from Libertador to Wyndham Costa del Sol, it's probably going to remain the best lodging option in the city until something newer and grander comes along.