Peruvian chain Libertador’s Luxury Collection hotel quickly became the hotel to beat in Cusco’s Sacred Valley of the Incas when it opened. It’s own rail station to Machu Picchu, a full service spa, and views of the Rio Urubamba are among the highlights. 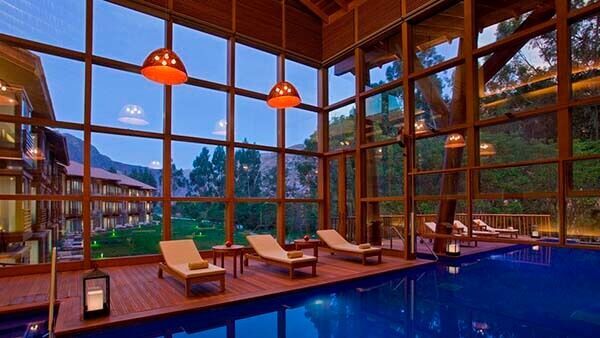 The Sacred Valley, the Inca heartland a short distance from Cusco, has been flooded with new luxury hotels over the past five years and each one out does the one before. In 2009 the Aranwa opened and the Orient Express took over the Hotel Rio Sagrado. Already in the area were the always-expanding Sol y Luna Lodge, the Sonesta in Yucay, the Casa Andina Private Collection, Urubamba Villa and several others. In the coming years both Inkaterra and Explora will be opening properties. The current top property is Libertador’s Tambo del Inka hotel, which opened in mid-2010, and comes on the heels of the chain’s stellar hotel in Paracas on the desert coast. 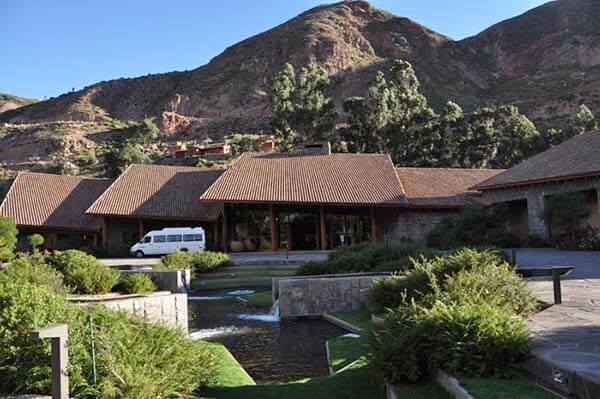 The most comparable property in the valley to the Tambo del Inka is the Aranwa, as it also has a full spa and impressive grounds that include gardens, ponds, and river views. While the Aranwa leans toward a more colonial feel throughout and a more impressive exterior setting though, the Tambo del Inka is far more modern and the quality of the general amenities are superior in almost every aspect: the restaurant, bar, common areas, in room electronics, bed linens, etc.

The 126–room Tambo del Inka is the only Sacred Valley hotel to sit right in the center of town and have its own railway station in Urubamba for trips to Machu Picchu. A big plus is being able to walk off the resort into town to have dinner at the excellent El Huacatay restaurant or have a drink in one of Urubamba’s understated bars and cafes. Designed by architect Bernardo Fort Brescia, who also designed Libertador’s Paracas hotel, the trapezoidal property runs parallel to the Rio Urubamba and rooms face either it or the opposing gardens backed by town, the cordillera, and Chicón glacier. 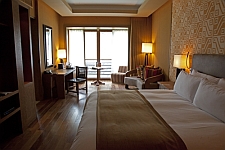 Rooms are mostly uniform throughout, varying only with an added room for the junior suites and suites (note: private butler service can be added in the suites). All have some sort of sitting area, an LCD TV, wood floors, Andean accents, and a either a balcony/patio or large sliding glass windows with a sort of lean–to balcony.

The earthy interiors are a high point of the hotel. Most are contemporary renditions of Inca textiles, stone walls, and pottery that take oversized forms and are put together in original ways—such as in stone fireplaces and hanging tapestries. A vibe that is stylish and not at all dated runs throughout the halls, lobby, bar, lounge, and restaurant. 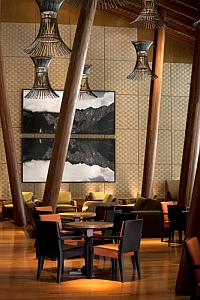 The restaurant, with a menu designed by Lima chef Rafael Piqueras, is one of the better hotel restaurant menus in the Sacred Valley and runs the gamut from standard international fare like steaks and grilled trout to more Novo Andina dishes like Lamb loin crusted with aji amarillo and pecans. An upstairs bar and attached game room also offers a small menu and has a long list of original cocktails, mostly featuring pisco (note: the Libertador owners also own Viñas de Oro, one of Peru’s top pisco distilleries).

The 5,500 square foot spa is rivaled only by those at the Aranwa and Sol y Luna. On the entry level an indoor–outdoor pool (half is inside, half is out) is free to use for guests, while the downstairs facilities include saunas, steam rooms, and a water world of pools and showers and tubs, all with a healthy mix of jets and bubbles. Specialty treatments like Andean Chocolate or 24–karat Gold Facials and Passion fruit or El Misti mud therapies are found nowhere else in the area (though they do offer most standard massages and treatments as well).

Their T’ikary tour office in the hotel arranges most of the standard Sacred Valley and Machu Picchu tours (with a hint of luxury), though the beauty of the hotel’s location is that, if you want to explore locally, you can walk right out of the door and take local transportation or hire a taxi to almost anywhere in the valley. One big advantage Tambo del Inka has is its own train station on the Peru Rail route to and from Machu Picchu. Outdoors near the train terminal, on a corner of the property, is a small village of shops that comes alive before trains are to depart. The rest of the time it stays quiet. A small riverside walking trail and gardens fill the remainder of the walled compound.

The general quality of the Tambo del Inka will give it staying power. While some of the hotels in the Sacred Valley concentrate on their surrounding landscape and others focus on maintaining an historical aura, the Tambo del Inka is well rounded in every degree. Until the much more expensive Inkaterra or Explora hotels open, it’s the best luxury hotel in the valley.

Review and small photos by Nicholas Gill, additional photos courtesy of the hotel.