For those looking for the best that money can buy on the Riviera Maya coast of Mexico’s Yucatan Peninsula, the Mayakoba Residences are the pinnacle. These lavish, exquisitely decorated villas are maintained and serviced by the staff of what has opened as the most stunning new hotel in the region: the Banyan Tree Mayakoba. 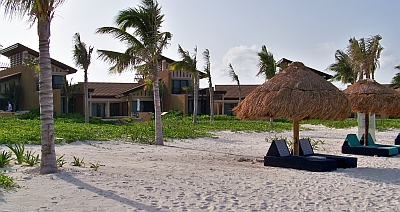 The long stretch of sand and sea between Cancun and Tulum was once a rugged coast with thick vegetation and deserted beaches. After the concrete trucks got moving a few decades ago though, it became an expanding vacation factory filled with hundreds of similar resort hotels. When the lodging options started going more upscale though, so did the real estate developments. The past few years have witnessed a surge of luxury condo and villa projects—as well as many that are “luxury” in name only.

There’s no confusion about ambition at the Mayakoba Residences. These villas have thrown out a challenge that very few others in the Riviera Maya can hope to meet anytime soon. They have created a collection of spectacular vacation homes that come with some of the best personal service in this hemisphere and what is in most respects the best spa in the Yucatan.

The Mayakoba Residences opened as a hotel in mid-2009, in a climate of a bursting real estate bubble in North America, Swine Flu, and bad press from Mexico’s drug cartels operating in the U.S. border zones. The residences here have gotten plenty of attention, however, as the hotel wowed everyone who came to visit—including the president of Mexico himself. Then known as Banyan Tree Residences, it was the company’s first entry into the Americas and they didn’t hold back. Elaborate stonework, acres of hardwoods, and a private swimming pool at every villa are just the big and bold touches. Every detail down the line is carefully constructed. The architecture is dramatic but balanced, the service perfectly on pitch but friendly.

The owners didn’t take any chances on the spa or their Thai restaurant however: they shipped well-trained masseuses and chefs over from their Phuket operations in Thailand. 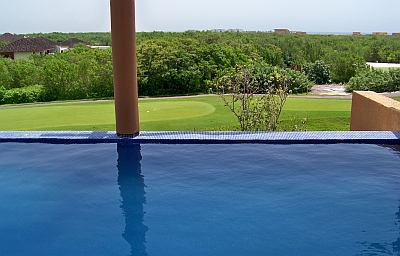 The Mayakoba development is unique in the Riviera Maya as it eschewed the normal land use model and went for a plan that would work with the land instead of against it. Yes, the underground cenotes and rivers were blasted open to allow boats to move through and creating a golf course is by its very act a complete transformation of the land. But most of the mangroves and forests that were not in the way of a greenway have remained in place, filled with birds, fish, and lizards. The course received an Audubon International certification for environmental stewardship and awareness.

The bulk of the Mayakoba buildings—and those of its neighbors like the Rosewood Mayakoba and Fairmont Mayakoba—are not even on the beach. You take a leisurely ride to the sand by boat, bike, or golf cart. This allows the vegetation to absorb the brunt of any tropical storm rather than walls of concrete and keeps the clearing of sand-holding plants and vines to a minimum. 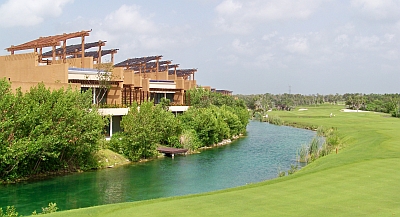 The main section of villas for sale make the most of the greenery, with a view of the Greg Norman designed El Camaleón golf course on the other side of a lazy river. (You can actually arrive on your back dock via boat.) The other main cluster of villas for sale is by the sea, half facing the water and the other half set back from the beach. After the beach club closes at the end of the day, these residents pretty much have the sand and surf to themselves.

Naturally the residents here have full golf privileges at what is the only PGA tournament course outside the U.S. and Canada. If you are an owner, you can sign for meals and drinks at any of the Mayakoba restaurants or the golf club. You get the same meticulous maid service, gardening, and concierge service as any hotel guest. You have ownership of your villa, but you get the same treatment as someone checking in for the week and paying by the night. Guests use the villa themselves for a week, a month, or two, then put it into the rental pool for the rest of the time, with guests paying the full nightly hotel rate.