The Caribbean's Last Bargain, with a few Caveats

While cash-rich buyers snatch up properties around the Caribbean, in a place many refer to as a 1930s Key West - Bocas del Toro, Panama - the highest returns may come to those willing to invest in patience and persistence. Most real estate veterans agree that committing to the medium-to-long-term and carefully vetting your investment are the keys to success in the Bocas archipelago.

"Prices are not going down. If you make a good investment, you won't lose money-it's just a matter of how much you're going to make," says Jim McCarren, longtime Bocas resident and owner of local real estate company Buena Vista Realty "It's the Caribbean and if you compare this with the eastern Caribbean, it's still inexpensive."

Prices in Bocas del Toro are currently readjusting to comparable sales in other places, a good sign for many who saw prices skyrocket in recent years. While prices are waning, interest in the archipelago's stunning natural resources is waxing largely due to a growing commitment to position Bocas as a major international tourist destination.

"Because it's so visited, there are still opportunities to invest here," says Chip Pickard, 16-year Bocas resident and part owner of Island Realty. According to the Panamanian Tourism Institute (IPAT), Bocas del Toro is one of the most visited areas of the country with tourism growing around 10 percent annually. 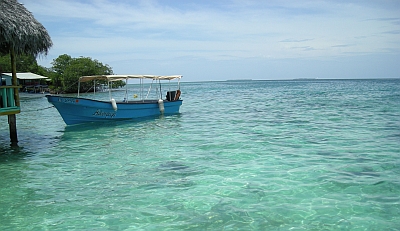 As Bocas claims a top spot on the country's tourism must-sees, the archipelago struggles with infrastructure demands, property ownership disputes, and rampant corruption. These obstacles are slowing sales.

"We're not in a downturn, but things are flat," Pickard says. "It's not just a reflection of the world economy but problems with local politics and the land problems we have here that the government has chosen to pretty much ignore. We have so many natural resources you can practically live off of the land. What we don't have, which makes the prices look ridiculous, is infrastructure. One of our biggest problems here is water and waste management."

The town dump currently resides on the road (quite literally) to the spectacular Bluff Beach. It's a constant thorn in local residents' sides that has incited recent street and print protests. There is talk that the local government has agreed to move the dump by February 18, 2009. If this happens, a clean path to the stunning beachfront properties that line Bluff Beach will be cleared.

Another problem all real estate experts point out is the lack of available titled property. Most of the property is homestead property, or what everyone refers to as Rights of Possession Property (ROP) land. Titled property is not unlike "fee-simple" titles in the United States. Titled property is subject to taxes, is verifiable through a Public Registry system and can be mortgaged.

Rights of Possession Property is similar to "squatters rights" as it existed years ago in the United States. ROP property is government owned, untaxed, and cannot be mortgaged. However, the presence of a dwelling structure protects a buyer's rights.

Never anticipating that the Bocas backwater would catch the eye of elite investors and travelers, the Panamanian government is now rushing to find ways to balance internal and external interests. The National Land Management Program (PRONAT) is a new agency charged with alleviating the problems associated with ROP land. Real estate agents see this as good news for the market.

"The government should open up title. They should title everything," Pickard says. "ROP is just open for corruption and disputes. Also, if you want to make an investment on ROP land like a resort, you have to get a concession which can take years because there are several different agencies to approve it."

Many developers will also tell you about the thousands in solicited bribes they have paid in order to move a concession forward.

Between the cultural differences, the corruption, and what many describe as a significant lack of good legal representation, success requires unyielding perseverance.

The infamous Red Frog Beach Project, half-built in the buffer zone of the Bastimentos Island National Marine Park, has been fighting for years with environmental agencies and labor unions. The Red Frog project was recently dealt another significant setback, or an option to make a more environmentally sound project, as the Panamanian Tourism Institute is looking at the decision. On December 12, 2008 the Supreme Court repealed the Environmental Impact Study (EIA) that permitted the project to begin phase two. Red Frog will have to re-submit their development plans before moving forward.

If Red Frog and Sunset Point are successful, it will show more stability in big projects," McCarren says. "There will be a lot of people with upscale homes and they'll want places to go." Don King, part owner of Bocas del Toro, Realty Services, Inc., reiterates the point: "If high-end places are built, they will sell."

Betting on an increase in luxury tourism and residential living spaces, a second gourmet foods market has opened along with the island's first upscale dining experience, 9? Restaurant and Lounge. In light of the stumbling blocks, investors and real estate professionals remain optimistic. "Eventually, it's all going to happen," McCarren says.