The Draw of Ceará: Real Estate in Northeastern Brazil

As I ride in the back of a buggy across the beach or lay in a hammock watching local fisherman come in on their jangada boats, unloading lobster, shrimp and other seafood delights, I understand what attracts people to the northeastern beaches of Brazil. Although the Brazilian state of Ceará doesn’t always make it onto the itinerary of American travelers, for the last 15 years Europeans have migrated to Ceará’s coastal beaches to get away from the hustle and bustle that has overtaken big city beaches. With the recent opening of flights directly from Atlanta, Ga. to the northeastern city of Fortaleza, it is likely that more Americans will begin to join their foreign counterparts in seeking out the tranquility that can be found in this more laid-back area of Brazil.

While Fortaleza, the largest city in Ceará and fifth largest in Brazil, has experienced an influx of foreign real estate investment, the smaller beach towns outside the city are becoming ripe with opportunities—and less pricey ones at that. From the hippie beach town of Canoa Quebrada and sleepy Majorlândia, located about 150 km (93 miles) from Fortaleza, to the kite surfers' haven of Cumbuco, many expats have started buying up properties in the area. Every day more real estate opportunities seem to be surfacing.

Although the state of Ceará has historically lacked a decent infrastructure, things have started to change. Along with ushering in direct flights from the United States (the city already welcomes direct flights from Rome, Milan and is working on a Norway route), Fortaleza is being considered as one of the cities to host the 2014 World Cup, which is likely to stimulate infrastructure projects in the area. Already the state government has invested significantly in projects near Cumbuco, Canoa Quebrada and Majorlândia, including the paving and widening of the road leading into the three towns. Plans for an airport 13 km (about 8 miles) from Canoa Quebrada and Majorlândia in the city of Aracati are also underway.

Attracting mainly Norwegians and kite surfers, Cumbuco, 30 minutes west of Fortaleza, is a small beach town with an Internet café, restaurants, and small hotels. It is starting to see an influx of new real estate projects arrive at its doorstep.

“Although it’s a relaxed little beach town at the moment, it is so close to the city and has such great beaches that I think it won’t be long until the foreign market arrives,” says Ronan McMahon of International Living in a recent article. “Norwegians are the only foreigners buying around here right now, but once North Americans discover this town, I think it’s going to boom, big-time.”

Currently under construction by company Dreamtravel, the Cumbuco Beach Sun apartments are slated for completion in 2010. Ten of its 24 units are already sold to buyers from Switzerland, Holland, Italy, Slovenia and Canada. Starting at R$397,160 (US$212,495), the apartment units range in size from 100 to 143 meters squared. 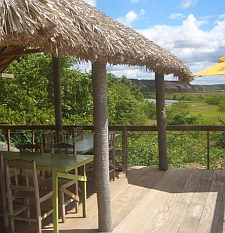 Another beachfront development, Kariri Beach Residence, is currently nearing construction in Cumbuco and has sold 60 of its 96 ocean view apartment units to Norwegian buyers. Ranging in price from R$300,000 (US$160,126) to R$430,000 (US$229,492), the two- to five-bedroom units at Kariri come with 24-hour room and cleaning services, allowing owners to put their unit in a pool where they are rented out for them as a hotel room. Once completed, the development is slated to have a pool with waterfalls, fitness center, playground, and a nearby beach volleyball academy affiliated with the Norwegian Volleyball Association.

“I think these apartments are rather expensive. The only reason they could be a good investment is if they get rented out as much as they promise they will because then there is a good return on investment,” says Robert Ruhmann with Brazilian real estate company Schmitt Imobiliaria. “What I understand is they will start a charter from Norway to Fortaleza and most of these people will stay in the Kariri and the Dreamtravel apartments. If this is true and the owners rent out their apartment there frequently for a good price than it will be a good investment. Norwegians are used to very high prices so to them Cumbuco is relatively cheap. The location of Kariri is of course very good— beachfront right in the center.”

Ruhmann said another Cumbuco apartment project slated on the outskirts of town was put on hold due to the economy.

“There was a big Spanish apartment complex at the end of Cumbuco planned, but because of the international crisis they postponed this project, like most Spanish investors here in Ceará,” Ruhmann says. “Ninety-nine percent of the buyers are foreigners, from all countries imaginable.”

A few kilometers from Cumbuco, Portuguese company Vila Galé is completing a five–star hotel. Boasting one of the few golf courses in Ceará, this property is hoping to attract high-end tourism to Cumbuco.

“Investors understand Cumbuco will develop much more than has been the case so far, there is still a lot of growth potential but only a limited amount of land available, so prices will keep going up,” Ruhmann says. “Properties are still far cheaper than say Pipa, near Natal or Porto de Galinhas near Recife, which are similar famous beach towns near a big city in the north east.”