Global financial jitters notwithstanding, Mexico's Caribbean coast is booming. From the metropolis of Cancun in the north, to the Riviera Maya and Tulum-Sian Kaan further south, vacationers, retirees, and other new residents are heating up the real estate market.

American-born Heidi Wosak has been selling real estate in Mexico for nearly 10 years, most recently out of the Cancun office of multi-national Century 21. "We have been very busy," she says. "In addition to U.S. and Canadian snowbirds, more and more upper-middle class Mexicans are relocating here; not only is there dynamic economic growth, there is a feeling of safety and security that is lacking in some other parts of the country."

Cancun in particular has been experiencing explosive growth: from a marshy backwater just a generation ago, the city now numbers a million strong. The Zona Hotelera has all the trappings of a cosmopolitan resort town, with lots of bars and restaurants. But there are residential areas that are more sedate and quite livable, and just a 15-minute drive can bring one to places with an end-of-the-world feel.

"The influx of businessmen from other cities in Mexico has spurred investment in infrastructure, and Cancun's modern international airport has daily convenient flights to every major city in North America and Europe," Wosak notes. "It has all the services and advantages of a large city, with a small-town atmosphere; there are no skyscrapers in Cancun city, for example. All this makes it a desirable place to live for foreigners."

According to Wosak, Cancun's English-speaking expat community is approximately 10% British, 70% Canadian and 20% American. "The Canadians tend to spend only the winter months here," she says. "while more and more Americans are opting to live here year-round."

The pulse of the Cancun Market

Not surprisingly, real estate prices are rising in Cancun.

There are several kinds of properties popular with foreigners: high-rises along Cancun's spectacular beaches, townhouses on the lagoon, and condominiums adjacent to marinas on the Caribbean.

A prime example of the first category is the Bayview-Portofino complex, in the heart of the Zona Hotelera. Many of the 2-, 3- and 4-bedroom apartments have wraparound balconies that afford spectacular views of both the Caribbean to the east and the lagoon to the west. Shared amenities include swimming pools and fitness rooms. The developer will sell new units at prices ranging between $400,000 and $1.6 million, and also help owners wishing to sell their apartments, many of them fully furnished. 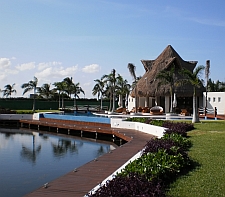 Isla Victoria is a subdivision of Isla Dorada, an upscale residential and marina development on the banks of the lagoon, also part of Cancun's Zona Hotelera. According to the literature, the gated community consists of 15 "townhouses" and 18 "villas" -- although in actuality, townhouses are apartments (6 to a building). and villas are townhouses (2 to a building). The penthouse and garden apartments each have outdoor whirlpools, as do the villas, but all housing units are equipped with the latest European appliances and are "smart"—i.e., a central remote, with displays on the main flat-screen TV, controls all climate, entertainment and security systems. The landscaping is lush and tropical, while marina slips and private jetties are situated quite close to the living quarters. Owners have access to such amenities as an intimate, high-tech movie theatre, infinity pool and palapa clubhouse. Townhouses run from $595,000 to $695,000; villas cost $995,000. 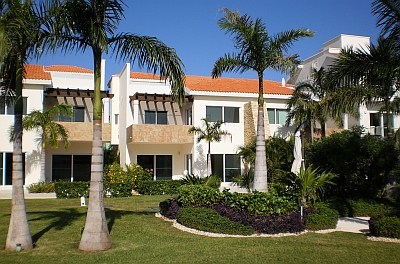 La Amada is an ambitious project north of the city, just opposite Isla Mujeres. "It is a European product that appeals to the older, more mature, buyer," remarks Wosak. With its island marina that can accommodate the largest yachts, Greg Norman golf course, boutique hotel and wellness center/spa, the low-density La Amada drips opulence. The natural tranquility is enhanced by underground parking. Prices for residences (classified as ocean view, lagoon view, beachfront and penthouse) start at $340,000 and go up to $2.1 million. 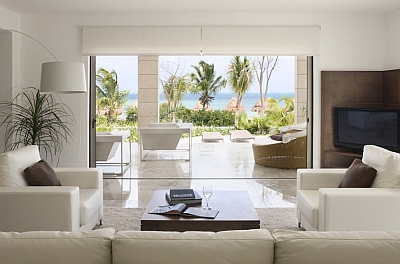 Stretching south of Cancun along the Caribbean coast is the Riviera Maya, a popular playground attracting vacationers -- and a growing number of expats -- from all over the world. At the center of the Riviera Maya is Playa del Carmen (pop. 150,000), where the foreign residents tend to be as much from Europe (France, Italy, Ireland and Germany) as North America. Developments encompass low-rise condominium complexes and lots for sale -- both for construction of private homes, as well as in mixed-use commercial-residential areas. 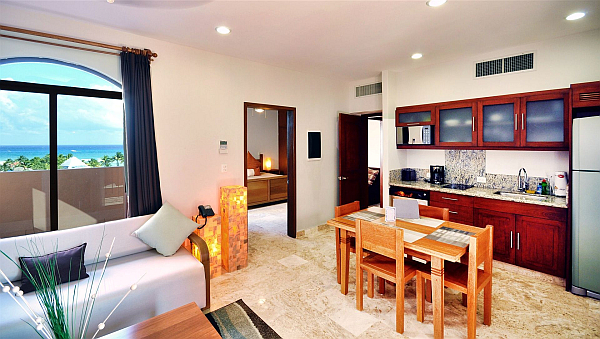 In Playa del Carmen proper you have the advantage of not being able to walk to the beach, yes, but also being able to walk to dozens of stores, restaurants, and bars. One good option for part-time residents can be a condo hotel. In this kind of setup your property goes into a rental pool when you're out of the country and has a much better occupancy with less management hassles than one renting through a vacation rental service. Acanto is one such development, with units starting below $300,000 for a one-bedroom unit, though of course there are larger ones with multiple bedrooms available. Owners have a gym on site and access to a beach club a few blocks away.