Perfect spring-like weather year round, reasonable cost of living, great quality of life and a place where luxury real estate values are many—that pretty much describes Cuenca, Ecuador. And no mosquitoes! 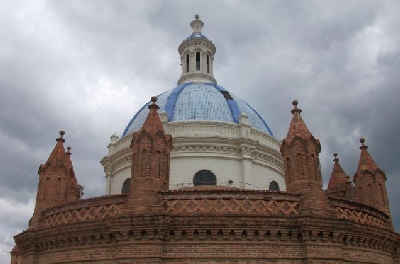 Situated in Ecuador’s southern Andes at an elevation of 8200 feet, Cuenca, Ecuador’s third largest city, is considered the country’s cultural heartland. In 1999 the city was as awarded the distinction of being a UNESCO World Heritage Trust site.

Everywhere you look there are flowers, blooming trees, grass and rushing waters (four rivers flow through the city). The city is cleaner and safer than most large cities in developing countries and there are claims it has purer water than most U.S. and European cities. 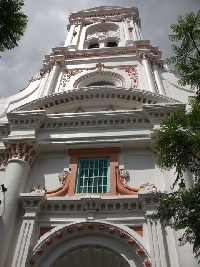 Colonial architecture, diverse cultures, art, and history are only a few of the qualities that make Cuenca such a desirable place. It has one of South America’s most impressive Spanish colonial districts, with narrow cobbled streets plus cathedrals and churches reminiscent of old Spain: 52 of them, one for each week of the year. Flower-filled courtyards and balconies make homes inviting inside and out. There are Spanish language schools, art galleries, active theaters, and many museums for a city of its size.

Cuenca is famous for its artistic traditions and festivals. Its Biennial is the largest art exhibit and juried art competition in South America. The German magazine Stern has rated Cuenca the best retirement destination in Latin America. International Living Magazine named Cuenca the top retirement destination in the world and Lonely Planet travel guide included it among the top cities in world for travelers.

Cuenca and the surrounding area are the crafts center for the southern Andes. The area is known for Panama hats, jewelry, pottery, musical instruments, ceramics, textiles and woodwork. 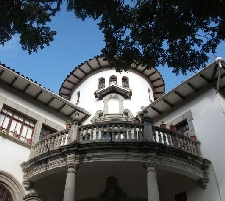 According to David Morrill, Cuenca Real Estate partner and author of the Ecuador Owner’s Manual published by International Living, “Most affluent buyers are settling for high-end condos, which go for less than $84 per square foot, or large houses in the new suburbs east of the city. Probably the best luxury bargains in Cuenca today are for these larger homes. Beautifully landscaped, finely detailed 3,000 to 5,000 square-foot houses, in Cuenca’s most desirable neighborhoods, can be had for less than $250,000. Many of the homes have swimming pools, guest houses and other out buildings. Similar properties in the U.S. would cost three to four times more.

We haven’t seen a drop in values here but prices are still a fraction of what you’ll find in most other popular expat destinations.”

There are no restrictions on foreign ownership in Ecuador. Plus the currency in Ecuador is the U.S. dollar, facilitating easy money transfers on transactions. If you're considering buying property in Ecuador, you might first consider doing an extended vacation there so you can fully experience the life and culture. 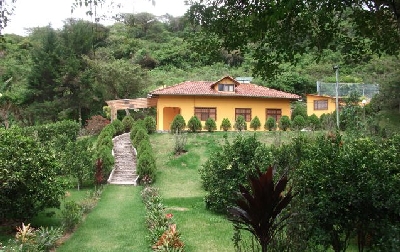 For those who prefer properties in the country, but only a short forty-five minute drive from Cuenca, the Yunguilla valley, southwest of the city, deserves a close look. Yunguilla is often compared to Vilcabamba (further south of Cuenca) because of similarity of weather and terrain. The major difference is that land prices are running about 50% of those in Vilcabamba. Construction prices are also a bargain, with the average cost for a luxury architect designed and supervised home is $38 per sq foot.

One lovely property I viewed was on two and one half acres of immaculately landscaped hillside with fruit trees and bougainvillea and other flowering shrubs—about forty-five minutes outside of Cuenca. It had just sold for only $140,000 dollars. With a swimming pool and seven bedrooms and baths, it was a fantastic buy. It was located in the valley which is a couple thousand feet lower that Cuenca: warmer, and perfect for growing bananas, oranges, and many other types of fruit.

Another property I saw in the Yunguilla Valley was situated on about 5 acres of established fruit trees and flowering shrubs. It was a modest-sized house with a swimming pool, tennis court, and outdoor recreation and barbeque area. It was going for $187,000 U.S. dollars (negotiable).

An interesting investment possibility is Hotel Crespo, one of Cuenca’s most popular hotels. It is Cuenca’s oldest hotel (operating since 1942) and is housed in a converted family estate dating back over one hundred years. It is conveniently located at the southern edge of the old town on Calle Larga on El Barranco, a bluff overlooking the Tomebamba River, about 4 blocks from the colonial city’s main plaza.

The hotel property also includes a building across the steps leading up from the river. Plans are already drawn up and approved for this building which will double the rooms of the existing hotel to 64 rooms and add an underground passageway which will include a wine cellar and wine bar (already built). Approval of plans is important since the Historical Planning Department has to approve all new or remodeling construction in accordance with the UNESCO mandate.

This property could be a great value for the right investor at $3.2 million (negotiable). Follow this page 2 link for more facts on Hotel Crespo.

Now is the time for investment in Cuenca 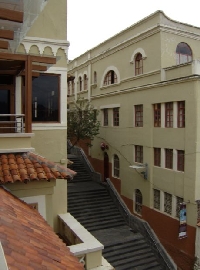 Cuenca’s population is approaching 500,000 and it has attracted numerous foreign expatriates and investors in recent years. According to Cuenca Real Estate there are about 700 North American residents living in the Cuenca area and a recent demographic study predicts that the city will be the most popular Ecuadorian expatriate destination within the next 25 years.

In general real estate prices are around one-half or lower that of equivalent properties in a good market area in North America or Europe, making it a good time to invest in the Cuenca area. Following in the footsteps of Mexico and Costa Rica, Ecuador and especially Cuenca will attract more foreign investors and retirees in the years to come.

The next two sites focus on helping expatriates, but also list Cuenca real estate for sale:

A fine boutique hotel for a Cuenca stay is Rocio Vasquez’ Mansion Alcazar.

Ecuador Owner's Manual, published by International Living, edited by David Morrill of Cuenca Real Estate. The book provides an overview of buying property in Ecuador, updated every two years, as well as overviews of the visa process and relocating from another country to Ecuador.