The age of Baja’s La Paz being a secret for expatriates may be coming to an end. Impressive new golf developments and housing communities plan to compete with Los Cabos in luring wealthy retirees and vacation home buyers from El Norte.

La Paz, the 471-year old capital of Baja California Sur, is truly a rare pearl in this fast-paced world . It's a place where vacationers come for an easy-going lifestyle that soothes the soul—as you might expect since “paz” translates into peace in English. It doesn't feel as touristy as its better-known Baja competitor, Los Cabos, just over two hours away.

La Paz is home to more than 200,000 residents, with all the amenities needed for a happy life. Situated at the gateway to the Sea of Cortez, called “the world's aquarium” by Jacques Cousteau, it offers spectacular sport fishing, scuba diving, snorkeling and other water sports on beautiful beaches that are great places to swim—unlike most at the tip of the peninsula. The malecon (boardwalk) offers a great place to view the beautiful sunsets. It's sunny more than 340 days a year, with temperatures ranging from 75 to 95 degrees. Yes, it's hot in the summer.

What was missing? Golf resorts and communities with world class courses like in Los Cabos. Grass just didn't seem to grow here and water was in short supply, reportedly because the water wells were poorly managed. The region also gets only about four inches of rain annually. However, developers found the answer thanks to desalinization and the introduction of a less water-hungry turf called paspalum that also was tolerant to salt water. Once again, innovation makes the desert bloom.

Scottish Links on a Desert Peninsula 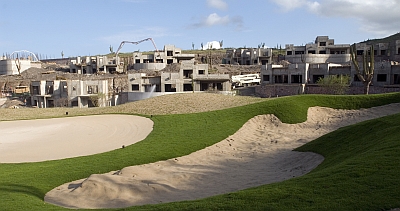 Paraiso del Mar (Paradise of the Sea) became the first to open a golf course in the spring of 2009. It’s an ambitious real estate and resort development on 1,700 acres of sandy land on a peninsula called “El Magote” across the Bay of LaPaz. Unlike some golf communities, there's no need for a gate. The best way to get there is by a five-minute water taxi ride, although there is a long land route over the desert that can take up to an hour from the airport as three other passengers and I found out when our driver did not get the right information.

On a site that Arthur Hills and design partner Brian Yoder called one of the most natural that they had ever seen, a links style course emerged that will remind some of the ones in Scotland and Ireland, especially when the paspalum turf has a chance to mature and golfers will have to resort to keeping the ball on the ground more.

“Creating a course here was like throwing down a tablecloth in one sense,” said Yoder, “We employed a very light touch.” Only 70,000 cubic yards of earth were moved, as when creating the classic links of Scotland. “We did it this way to preserve the existing natural beauty and, from a golfing perspective, we did it because so much of the existing terrain was dramatic enough the way we found it.” 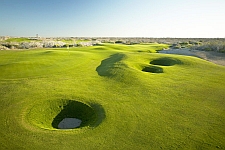 Fitting for a links course, most of the greens are large with bold contours. This is especially true on the par 3 No. 6 where a natural bowl has been incorporated into the green itself that bumps right up against the fore dunes that separates the course from the beach. I had to sink a five-foot putt to avoid four-putting. Putting the cup at the bottom of the bowl makes things easier as all balls roll down there. In another nod to St. Andrews, there is a double green shared by Nos. 4 and 7.