Real Estate in the Riviera Nayarit of Mexico

Valued among the most expensive real estate in Mexico, the lush stretch of coastline along the Pacific Ocean north of Puerto Vallarta is undergoing a new wave of development—including improvements to infrastructure that will benefit new home buyers. 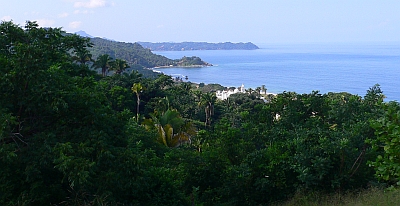 Mexico’s Pacific Coast has been a playground for North American snowbirds for decades. Although it stretches for more than 2,000 miles, only a few enclaves have attracted the luxury market. One of them is the Riviera Nayarit (named after the state of Nayarit, just north of Jalisco, the state that is home to Puerto Vallarta).

For years, Punta Mita has been the anchor of the region’s luxury segment. (See our earlier story on luxury real estate in Punta Mita). Ever since that development put the area on the map, however, upscale vacation and retirement real estate projects have been inching their way northward up the lush coast. Now, the area is set to get another boost: the new superhighway linking Guadalajara, Mexico’s second largest city, to the beaches of Puerto Vallarta and the Bay of Banderas. It will run through Nayarit. 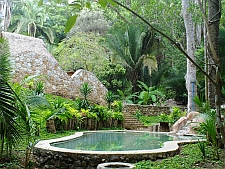 Even before the government’s latest routing decision, nature contrived to make the Riviera Nayarit one of the most beautiful seaside locations in Mexico. “There are only a limited number of places where jungle-covered mountains run all the way down to white sand beaches,” says Fred Feibel, a veteran local real estate agent. “This phenomenon is limited to the area between Higuera Blanca and Lo de Marcos; south of Puerto Vallarta, the climate gets drier, and the roads tougher.”

According to Feibel, an American who has been selling real estate for 13 years, “The land along this stretch of coast is possibly the most expensive in the country. Property has appreciated 10 times in 10 years since 1998. Since the economic downturn, prices have already hit bottom, and are coming back. Growth will not be as steep as in the past, but this is still paradise at a good price. You can still expect appreciation. And you can get land plus a house.”

One of the most popular destinations for expats in this Pacific Coast region is San Pancho, a small fishing village officially named San Francisco, about 40 minutes north of the Puerto Vallarta International Airport. 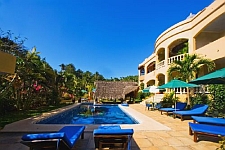 “San Pancho is a family-oriented town,” says Jordi Ferrara, a prominent real estate agent with a Ferrara Realty office on the main street. “We sell quality of life as much as actual property; there is a small town feel here. There is no McDonald’s, no high-rises; plans are to keep development down and preserve a green belt: no selling of jungle to build golf courses.”

“It’s not for everyone,” he adds. “But people come here after seeing Puerto Vallarta and Punta Mita, looking for the real Mexico.”

While many of the town’s streets remain unpaved, there are two neighborhoods with good roads. Las Olas is a beachfront gated community of single-family homes that is walking distance to downtown. As a gauge for prices, oceanfront (not beachfront) lots go for approximately $1.2 million; 4,000 square meters of beachfront property can cost twice that amount. 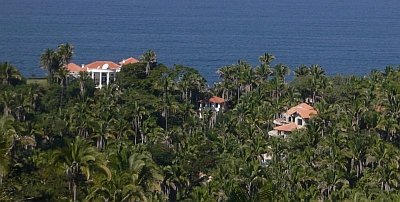 Wending its way up adjacent verdant hillsides is Selva Azul, whose developer sell lots on which to build (although some completed homes can be found for sale by their owners). Much of the flattest land here has been sold to Armonia, a condominium development still in its pre-construction phase.