A New Level of Style in Punta del Este, Uruguay

The new Edificio Acqua development raises the bar in Uruguay and brings a new style of development to this hot spot stretch of coastline.

Punta del Este is an exclusive beach location in Uruguay that combines the prestige of the Hamptons, the élan of St. Tropez and the buzz of Ibiza. For decades its beautiful beaches, gorgeous golf courses, perfect polo pitches and stunning surroundings were a well–kept holiday home secret, particularly for those wealthy Argentines living in Buenos Aires.

During Argentina's economic crisis building work slowed to a halt slowed and the municipality was able to watch the consequences of overdevelopment in Ibiza and St, Tropez to its longer term advantage. Despite a steady growth of tourism over the last ten years, Punta del Este has maintained its glamour through restricting the amount of real estate available as well as careful management of the beaches and surrounding woods. 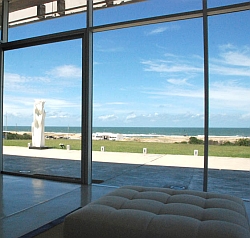 Within easy reach of the airport at Montevideo and Buenos Aires, Punta del Este and its quaint neighbouring village of La Barra now offer an attractive range of facilities, sandwiched between spectacular white beaches and well maintained woods. Particularly notable are the picturesque seaport, small airport, well maintained polo pitches and tennis courts and a fashionable variety of galleries selling art, antiques and collectibles. Such is its high–end draw that stellar names such as Ralph Lauren, Naomi Campbell, Max Abramovitz and Kate Moss are known to favour it for top–up doses of quiet rest, sun and fun.

Edificio Acqua is an L–shaped 6–storey super–luxury residential complex in 3 hectares of land in perfect spot on the up–market side of Punta del Este and only five minutes from the nearest golf course. A quantum leap beyond previous design, build and service quality, the units are so attractive that some were occupied several months before completion of the common areas. Each of its 34 Residences; which vary between 300m2 and 1,800m2, has a stunning view of Isla de Lobos. The six largest also have beautifully crafted infinity pools and uninterrupted 180 degree panoramic views extending from the village of La Barra to the lighthouse on the point from which Punta del Este derives its name. 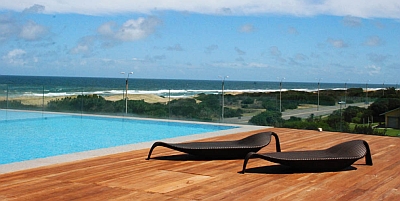 Ceilings are unusually high for Uruguay, with wall to ceiling clearances of 3.4m complemented by panoramic windows that open in their entirety to allow direct access the stunning sun filled space. As one of the most luxurious residential complexes in the whole of Latin America, the complex also includes an exclusive beach club. While the municipality will not allow a closed membership, residents have many compensations including VIP cards, discounts, massages, a full bar and top quality food at the restaurant managed by the acclaimed Rodrigo Toso who received the Argentine accolade "Best Chef" in 2006.

Stunningly well designed and built, the Acqua Building has raised the bar in terms of local quality build and design to such an extent that new buildings in less salubrious areas are copying easier aspects of Acqua's design. However they're unlikely to reach the extremes of high class quality, service and detail achieved by Acqua's team which have been reflected in the awards it has already won. Declared Most Attractive International Project in a Spanish competition with 800 entrants from over 50 countries, it has also received formal Uruguayan recognition through placing first with FIABICI.

The level of expertise of project consultants are another reflection in the thoroughness of design of the Acqua undertaking. Marble sculptures in common spaces are custom made by Uruguayan Pablo Achugare, light and functional art have been created by Ernesto Bechara (he was responsible for lighting in Argentina's national treasure, the Teatro Colon) and other consultants have included the head of security from the US Embassy in Buenos Aires and the acclaimed Uruguayan architect Rafael Viñoly.

World Famous for his architectural prowess, Viñoly's recent achievements include becoming a finalist in the competition to "rebuild" New York's World Trade Centre and winning the project as architect for Japan's Tokyo International Forum. Acqua is the first project he has undertaken in his own country and was inspired by the uniqueness and beauty of the surroundings and its glamorous lifestyle. When first approached about the project, his proposal for terraces, an L–shaped form and infinity pools appealed to the owner Juan Kronfuss as a "beautifully crazy concept". The end result has succeeded in integrating sunlight, skies, rippling water, distant vistas and an exceptional level of quality and service while contriving to appear far smaller than it is while melding the complex's outward form into the local environment and woods beyond.

– 3 "Manors" and 2 Penthouses, each with private decks, infinity swimming pools and 2 access points via private lobbies, one of which has a dedicated elevator, 5 Duplexes and — 24 Residences, accessed by private lobbies, each of which has a private terrace.
– Each unit has 2–4 parking spaces and private lobbies, home cinemas, wine cellars and vaults. All bedrooms have bathrooms and walk–in closets
– There is wifi and a variety of security measures in the residences and beach club.
– Each apartment has its own private maids quarters and the complex provides cleaners, maid service and a 24 hour concierge to all occupants.
– Dedicated support infrastructure also includes a private electrical substation, transformer and 750–775KW generator
– Private common areas include large lobby, gym, indoor Jacuzzi, outdoor pool and spa and more facilities are available at Acqua Beach Club

See more as it all develops at www.acqua.com.uy

Story and photos by Carole Edrich.