Zihuatanejo Luxury Homes with a View in Mexico

With dramatic panoramic views, year–round warm weather, and a sizable but not overwhelming expat community, Zihuatanejo is the perfect place in the sun for many upscale home buyers. Add a slow-moving market lately and there’s plenty to choose from in paradise. 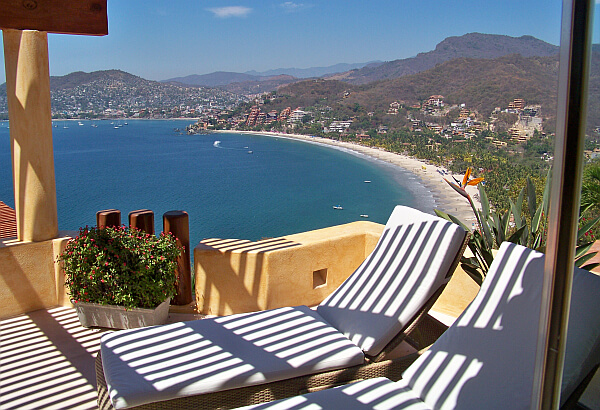 Finding a home with a view is easy in Zihuatanejo, on the Pacific coast of Mexico. With steep hills surrounding a beautiful bay, you can get into a condo or house with a breathtaking view starting at around $300,000. The real question is, “What will surround you as you take in the vista?”

As the Zihuatanejo luxury home list prices rise, so do the houses: higher on a bluff, a higher palapa over the pool, larger homes with bedroom balconies and more spectacular open living rooms. Many of them are the kinds of showpieces readers drool over in design magazines, but here they come with a price tag that’s often easier on the wallet—especially in this relatively slow real estate market compared to coastal areas of Mexico with better air connections. It is possible to spend three to five million dollars on a home here still, but what you get for that price would be hard to match on any beach north of the Rio Grande.

After lounging around poolside at Cala de Mar Ixtapa and Thompson Zihuatanejo, I met up with local real estate agents for Zihuatanejo luxury homes to get a feel for the market. With them I got to look inside the top-tier mansions around this once-sleepy fishing village turned tourism magnet.

John Murphy, with Mexico Beach Property, has been in the area since the early 1990s. “At that time,” he says, “I could count the electric lights on the hillsides on my fingers and toes.” Then the Mexican government waved its magic development wand over Ixtapa, creating a custom-made resort area, a west-coast version of Cancun. Zihuatanejo came along for the ride, with some cruise ships docking sometimes, and the whole area boomed.

Now, with the state of Guerrero getting a few years of bad press regarding cartel crime, Zihuatenejo hasn't benefited from the North American real estate market uptick and the baby boomer retirement wave the same way as Los Cabos, Puerto Vallarta, and the Riviera Maya. “Right after the housing crisis hit in the U.S., the bottom fell out here as well,” says Murphy. Unlike in those other spots though, here it never got back to the good ole days. In the '00s, all over Mexico, American buyers were using equity from their U.S. home to get a loan there for a vacation home, or were selling their former home at an inflated price and moving up—bigtime—to a more elaborate home on the coast down south. Just as the U.S. economy recovered, violence got worse in Guerrero, especially in Acapulco. Although incidents in Zihuatenejo and Ixtapa have been more isolated, the twin cities haven't completely escaped the problems either.

This doesn’t mean all sellers are ready to take a lowball offer, however. “The people who truly need the money right now have dropped their asking price anywhere from 5% to 20%,” says Murphy. “Most people just aren’t in much of a hurry to sell though, so they can wait it out.”

It doesn’t cost all that much to maintain a home in this climate, taxes are minimal, and most houses are fully paid for, with no loan to service. Some of the slack from the U.S. buyers has been taken up by those from its two neighbors too: luxury buyers from Canada and Mexico are closing on more houses in the region.

Murphy took me to two properties on offer in a gated area marketed as an upscale, prestige development for multi-millionaires—Monte Cristo—where building lots alone start at half a million bucks. Located on the right side of the bay as you look out from town, it looks back at Zihuatanejo and all three of its beaches. A small beach club, spa, tennis courts, and nature reserve are part of the infrastructure.

It’s hard to imagine a more striking coastal panorama than the one you get from Punta Godomia, pictured here. Priced at $5 million when I visited, it had multiple pools, five bedrooms with balconies, media room, huge gourmet kitchen, and a hardwood deck bar area bigger than that at most hotels. A two-car garage and maid’s quarters are also built into the hillside location. 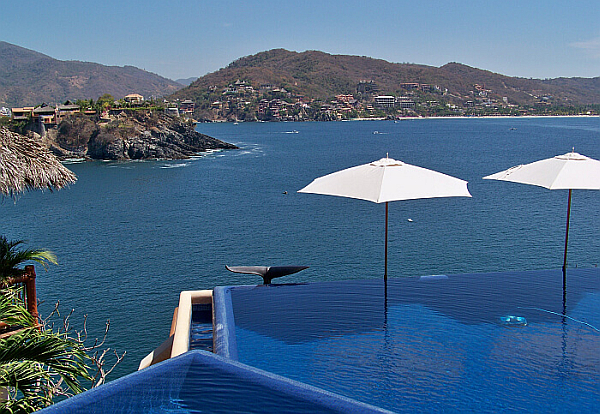 We also looked at a $3.4 million compound, Puerto Mio that is two houses for one price. These were some of the first homes to be designed and built by the area’s best-known architect, Enrique Zozoya, whose name graces dozens of the regions highest-priced villas. The first home is 7,500 square feet, with five bedrooms and six baths. The second is 5,000 square feet and has four bedrooms, each with its own terrace and bath. Both homes have a pool overlooking the water and access to a small rocky beach. 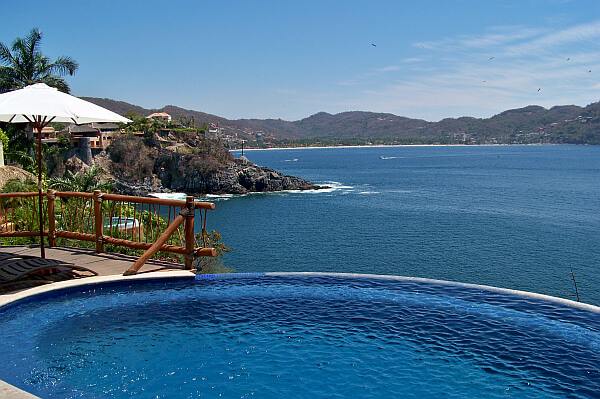 Zozoya's name on a project can add a premium to the sales price and when we checked back in on the market in 2020, Costa Grande Real Estate had another grand mansion he designed listed for just shy of $5 million. With 7 bedrooms, 7 baths, and a variety of plunge pools, Casa Tomasina also has an infinity pool running the width of the large villa and terraces big enough to host a party for 40.

On the other side of the bay, Judith Whitehead took me to newer developments with equally lofty locations, but with a different outlook and a wider range of prices. We visited Cerro del Vigia, a gated hill-clinging complex with common tennis courts, chapel, and clubhouse. Here it’s possible to get a 4BR house with a pool and great view for around $700,000 to $800,000. Or you can buy a lot and build a dream home with more custom details and hand-crafted custom furniture for under a million.